“A poem is a vehicle that takes you on a journey. It can take you anywhere, into anything, into language itself.”—Robin Reagler

For some, the COVID-19 pandemic created only chaos and confusion.

For others, it revealed what was essential—with stark clarity.

For Houston writer Robin Reagler, it spurred the realization that she must leave her position as executive director of the highly regarded nonprofit Writers In The Schools (WITS) and devote herself single-mindedly to creating poetry.

For 22 years, she had helped WITS come to national prominence. Then in 2018, she took on another leadership role as the board of trustees chair for the Association of Writers & Writing Programs (AWP). Her work at WITS had been rewarding, but all-consuming. With the death of her parents and the realization that she was moving closer to the milestone of her 60th birthday, she recognized the need to focus more intently on her art.

In the spring of 2021, Reagler, 59, released Into The The, her first book-length collection of poetry. It was praised by queer Pulitzer Prize-winning poet Jericho Brown and won the Best Book Award from U.K.-based Backlash Press. “Reagler’s poetry shows us how language is a playground, high ground, and common ground for communicating what is most important about our human condition,” observed Gretchen Heffernan, publisher of Backlash Press.

Her second volume of poetry, Night Is This Anyway (Lilly Press), debuted at the end of March, arriving just in time for this month’s observance of National Poetry Month. A press release describes the book as “a play of lesbian love in three acts.” Acclaimed Houston artist Rachel Hecker created an abstract image entitled Burn for the book’s cover.

“The book is chronological in a certain way,” Reagler says. “The first act is really about a kind of euphoria of discovering my sexuality that comes at the beginning. It’s followed by a period in which it is very difficult, which was my experience. You hear people say, ‘You don’t come out once. You have to come out every day of your life.’ Just because you figure out you’re queer doesn’t make being in a relationship any easier. Being in a relationship is work—truly a labor of love.

“The third part is the more joyous, harmonious part of being in love that happens later in life.” 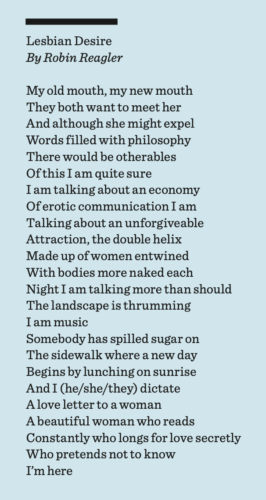 Reagler was born in 1962, the oldest child in the only Jewish family in Wynne, Arkansas, a small town in the Bible Belt. Growing up in the 1970s, she felt like an outsider. “I had no role model, as far as I knew, in terms of gay or lesbian or anything,” she recalls. “There was so much repression in the whole community.”

A turning point came at age 13 when she was given a journal by her mother, which spurred the first steps of creative self-expression through language—a passion that has come to define her life. “My mother didn’t really know what was up with me,” Reagler admits, “but she thought that if I could write about it, it would make things better.”

“I was drawn to certain things without knowing why,” she adds. “As I was getting dressed in my bedroom as a teenager, my mom was watching The Today Show a couple of rooms down in the house. I heard the voice of Jodie Foster, and I ran out to see. ‘Who is that?’ I was so interested in her, but I didn’t know why. Gertrude Stein was another one. I was so interested in her. I didn’t really have a sense of why until later in my life.”

At age 20, she came out while completing her MFA at the University of Iowa’s famed Iowa Writers’ Workshop. “In a world of writers, it would be a lot more embarrassing to say something homophobic than to say, ‘I’m queer,’” she observes wryly. “Lots of writers are gay, so [coming out] was almost nothing.”

In the mid-1980s, she moved to New York City and began teaching high school.

“I remember going to the ACT UP protests, and I remember police wearing rubber gloves,” she states. “Some of those protests were scary. I can remember taking the bus several times from New York to D.C. to see the AIDS Quilt.

“I feel like protest was a big part of my life. It’s a way of being American, and saying what you want to say. The protest gets on TV or in the news, and it’s at the heart of being an American citizen,” she notes. “Even when our children were little, we started taking them to protests when they were babies. We took them to the Women’s March. It’s a critical form of self-expression in our country.”

She moved to Houston in 1990 to complete a PhD in the University of Houston’s acclaimed Creative Writing Program. She expected to stay long enough to complete her degree  and move on, but she ultimately ended up building a life and a family in Houston.

In the mid-2000s, with her then-wife Marcia Chamberlain, she created the blog The Other Mother: Letters from the Outpost of Lesbian Parenting. “The process of deciding to have a family and have children was very isolating,” she says. “Even though we lived in a huge city and had many friends who were queer, we didn’t know people who’d had babies.”

She and Chamberlain connected with a lesbian couple in Pasadena who had had children, invited them over to dinner, and introduced them to their son. “And they told us about everything that they did, and that’s how we found out how to [create a family]. I wanted to have a blog so that people who were interested in having a family would read it and say, ‘We can do this, too.’ The blog brought to us a world of women who were interested in starting families and having children.”

In 2009, Nickelodeon selected it as the best Houston parenting blog. “It was a great experience,” she says of the period in which she maintained the blog. “There are still people today who get in touch.”

Now, with her 16- and 18-year-old children, Reagler lives in the Heights, co-parents with Chamberlain, and shops around her third book of poetry to potential publishers. She has also begun teaching at Houston Community College.

“It’s a very new adventure, and I’ve enjoyed it,” she says of her new HCC gig. “I love my students and I love the teaching. I’m at Northline, and years ago I taught at a middle school in that area. My students are earnest and serious, and want to do big things with their lives. I feel grateful to be a small part of it.

“The experience that people my age had as teenagers is very different from what I see young people today going through. Many young people today wonder: ‘What is my sexuality?’ They move through something fluid, and it can even change.

“For me, I didn’t feel that there were any choices in terms of sexuality. There was a tunnel that I was hurtling through, and I didn’t feel like anyone was there with me. I’m glad that things have changed, and that young people have the opportunity to discover who they are. “I don’t think [today’s youth] can understand the secrecy surrounding sexuality] that I experienced as a young person.

“The ‘night’ part of the title of my book Night Is This Anyway is about the kind of carefulness [surrounding] my sexuality that was lived at night. I didn’t go around holding hands with women 30 years ago. I would have been scared.

For more on Night Is This Anyway, visit amazon.com.