It was quite the scene on Bourbon Street when Jeremy Le-Blanc and Max Jones marched through the French Quarter with a brass band and their entire wedding party, waving white handkerchiefs with the couple’s names embroidered on them.

A few guests even bobbed their umbrellas up and down to the Cajun music. The whole French Quarter seemed to take notice, with many shooting videos and photos. Some bystanders even joined the parade for a few blocks, until it ended in the Pat O’Brien’s courtyard where the band entertained the crowd for a good 30 minutes. There was much to celebrate in New Orleans that day.

“The entire weekend was a dream, and turned out to be better than I could ever have imagined,” Jones says. “We spent the whole weekend with everyone together, starting with a brunch and second-line parade on Saturday, and then the wedding on Sunday. It was a
really wonderful time, with all of our worlds colliding. It was humbling and very special.”

The historic Columns Hotel in the Garden District was the venue for the ceremony and reception, with plenty of Old New Orleans charm seeping into every minute of the festivities. The wedding party was dressed to the nines as they enjoyed a proper cocktail hour before the ceremony.

After the couple was hitched, everyone meandered onto the hotel’s famous front porch to sip champagne, enjoy the perfect weather, and watch the grooms have their photos taken as the streetcars whizzed by. The light from the setting sun filtered through the live oaks and Mardi Gras beads that have found permanent homes hanging from the overhead streetcar wires. It couldn’t have been more “New Orleans” if it tried.

Friends of LeBlanc and Jones are well aware of the couple’s affinity for all things Louisiana. Gumbo is a staple in their Houston Heights home, as is a constant debate among their large group of Louisiana ex-pat friends about how to make the perfect roux. Each Monday night, the group gets together to eat, gossip, and celebrate—and if LeBlanc and Jones are playing host, you can bet the dinner will have some Cajun flare.

The 35-year-old LeBlanc is from New Iberia, Louisiana, population 30,000, which is situated on the Gulf coast midway between Houston and New Orleans. After being raised in the rich Cajun culture common to small Louisiana towns, he left to attend the University of Louisiana at Lafayette. He found himself in Houston after graduating, and he now serves as regional underwriting manager at AIG.

Jones, 30, was raised in Houston. He recently graduated from the University of Houston and serves as the online content coordinator for David Weekley Homes. Jones is a certified yoga instructor as well as a professionally trained dancer who has traveled the world performing, choreographing, and training others.

It may seem unusual that LeBlanc, who assesses risk for a living, and Jones, a dancer, would pair up. But it is their devotion to each other and their shared goals for a family that keep the relationship strong.

“We like to constantly remind each other of how much [our relationship] means,” Jones says. “We will spontaneously get each other cards, leave random notes, bring home flowers, or even set up a date night to try out a new restaurant.”

“We do romantic things for each other all of the time,” LeBlanc adds. “For me, it’s the little things that are most romantic.” 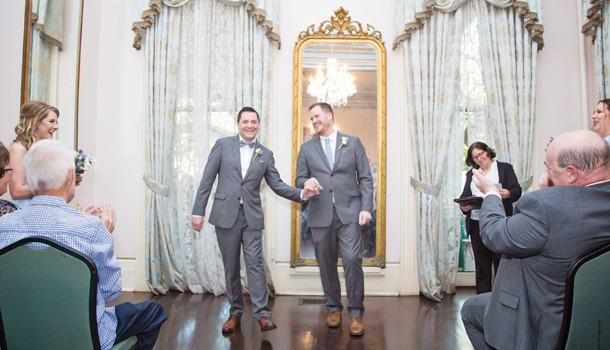 The two met in person for the first time after chatting online for a few weeks. Their first date was at a local wine bar, where they sat for two-and-a-half hours getting to know each other. Most of that time was spent laughing at the list of questions Jones had written down in case they found themselves with nothing to talk about.

“Max seemed genuine and caring,”
LeBlanc says. “He was engaging, had a nice laugh—and a cute butt, too. He made it easy to want to get to know him more.”

“I never felt like I was trying to get to know someone new because I felt so comfortable and content around him,” Jones says.

Their second date soon followed, and the couple started seeing each other almost every day. Before they knew it, they had decided to move in together in 2014. In 2015, their Heights home fell victim to the Memorial Day floods. It was a challenging event, but they cleaned up and made it through together. They have since sold that home and are currently building a new house in the Heights where they soon hope to start a family.

It is through the challenging times that couples often realize their true strength. When LeBlanc found out his father had cancer, he leaned on Jones for support and came to a revelation. “My dad found out he had cancer while Max was working in New York,” LeBlanc says. “It was painful being apart from each other, but I felt comfort in knowing how much he cared for me. I think that was a defining moment.”

“Jeremy has inspired me and pushed me to reach goals that I never thought I could,” Jones says. “He wants what’s best for me, always, and is a constant reminder of what a dedicated partner is. We hope to have a family some day, and he is the perfect role model for a child. So I wouldn’t say there was one moment in time when I realized I wanted to marry him—I just always knew!”

Through thick and thin (both in life and in their quest to make the perfect roux), the couple has looked to each other for support. On their honeymoon in Costa Rica shortly after their April wedding, they relaxed and reflected on the beautiful celebration with their supportive friends and family.