Rico Escobar is a fearless Houston rapper who embraces his bisexuality and finds a stronger, more authentic voice in the process.

The robust Houston hip-hop scene is crowded with talented artists, but Escobar is unique in his sound and his approach. “I’ve been called everything under the sun, but I’ve never been told that I couldn’t rap,” the 27-year-old says of his experiences as an out artist.

Escobar is certainly not the first queer rapper in the game. However, even in 2018, many artists, especially in hip-hop, are encouraged not to be open about their lives.

“I’ve always been out as a rapper, even when a few record execs advised me to go back into the closet because [they said] there was no way to market a bisexual rapper,” Escobar says. “There is no blueprint for an openly bisexual rapper, so I decided to make my own.”

His approach is wise for a burgeoning talent. Authenticity often lends itself to more meaningful work, even in an industry that still misperceives queerness as a negative. Escobar sees an opportunity in that misperception.

“My queerness can be an obstacle because hip-hop is still seen as a hetero, male-dominated genre,” Escobar says. “Bisexuality is viewed as nothing more than ‘confusion’ or a mental illness by society, especially for men of color. That notion pushed me to go harder because I knew that I was fighting an uphill battle. I knew I had to be creative and work harder than everybody else.”

Escobar released his first video, to his single “Dance With the Devil,” in 2017 as part of his EP titled Back to Business. He is working on his next single, which should be released later this year. You can find his music on all major music-streaming platforms. 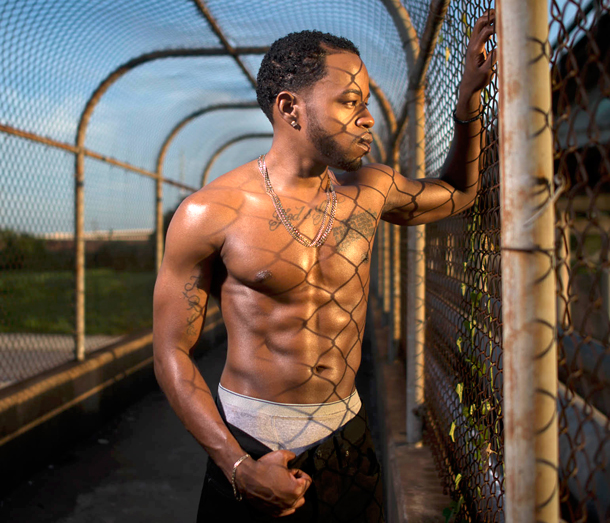 “Sonically, I am influenced by a lot of the greats such as Kendrick [Lamar] and Nicki [Minaj], but also L.L. Cool J, Missy Elliot, and Biggie Smalls,” Escobar says. “I also study the style and emotion of classic R&B acts like The Emotions, The O’Jays, and Donnie Hathaway.”

As an emerging artist, Escobar offers some advice for newcomers who think they lack the resources to create their own music.

“I would reiterate the power of the Internet,” he says. “Luckily for us, we live in an era where you don’t have to spend a ton of money on studio time and beats just to get started. Doing something as simple as free-styling over a YouTube instrumental and putting it on your social-media pages can help you build a following. Don’t go broke to appear rich. You might not have the resources, but you can definitely be resourceful.”

A major driver behind Escobar’s music is the freedom he has experienced by being unapologetically out and proud about his bisexuality.

“Imagine doing something you love, but not being able to be yourself while doing it,” he says. “It feels like you’re standing outside and not able to breathe, even though you feel the wind blowing. I couldn’t do that to myself, and I knew the community needed a voice. The value of being out as an artist is freedom. There is nothing to hold you back, and you become fearless.”