As Harvey’s floodwaters receded, theater professionals quickly assessed the storm’s damage to both performance venues and ticket sales. Representatives from smaller and larger institutions alike—from Rec Room and Gravity Players to Stages Repertory Theatre and the Alley Theatre—wondered how best to unite communities in the wake of the wreckage.

Among the hardest hit was the Alley, situated in downtown Houston’s Theater District, which suffered extensive flood damage to its Neuhaus stage—a black-box-style space below street level.

“We’re trying to get the Neuhaus up and running for Lover, Beloved in February,” says an undeterred Dean Gladden, the Alley’s managing director. “We’re making a few tweaks, but the Neuhaus will look exactly the same to the audience once it’s renovated.”

The Neuhaus, a smaller and more intimate space than the main Hubbard stage, has served as a launchpad for the Alley’s newer—and often edgier—work. Last season in the Neuhaus, the Alley produced the hip-hop play Syncing Ink by NSangou Njikam as well as Hand to God by Tony-nominated playwright Robert Askins.

Before Harvey, the Alley was in final production for Describe the Night by Rajiv Joseph. The Brooklyn-based Joseph has premiered two of his plays at the Alley, Gruesome Playground Injuries (2009) and The Monster at the Door (2011).

Despite the damage to the Neuhaus, Gladden refused to cancel or even reschedule Joseph’s Describe the Night, a product of the Alley All New festival that showcases readings of new work. Instead, Gladden is relocating it to the Quintero Theatre at the University of Houston. “We had to redesign the whole staging because [the Quintero stage has] a thrust configuration instead of in-the-round,” Gladden says. “But we were able to build a new set and lighting design in time.

“And it’s selling very well,” he adds. Describe the Night runs through October 15.

Fortunately, Alley’s larger Hubbard stage wasn’t damaged, as floodwaters didn’t rise into the lobby or above the basement. (In 2015, the Alley underwent an extensive renovation, most of it concentrating on greatly expanding the Hubbard stage and refurbishing the lobby area.) Thus, Gladden aims to reopen the Alley for A Christmas Carol—one of the season’s biggest sellers—by mid-November. 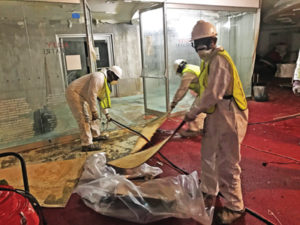 While costumes and sets survived on upper floors, only 25 percent of the Alley’s props are salvageable. Plus, the lighting and sound equipment in the Neuhaus were destroyed along with the surrounding dressing and laundry rooms. “The best way to help is contributing to the theater through our website,” Gladden advises. “We’re looking at about $15 million in losses, and our insurance only covers about $7 million.”

Next door to the Alley, the Wortham Theater Center also suffered damage to its two performance spaces and won’t be fully operational again until May 2018. That means both the Houston Ballet and the Houston Grand Opera will have to relocate their entire seasons. The Houston Ballet moved its September production, Mayerling, to the Hobby Center, and managing directors from both companies advised patrons to follow email press releases for updates.

Smaller theaters, some of which are nomadic and jump among various venues across Houston, are recovering in different ways. Many didn’t sustain flood damage, but had to cancel performances due to the inclement weather. The freshly formed Gravity Players, as well as Firecracker Productions, Rogue Productions, and Dirt Dogs Theatre Company, all suffered due to lost ticket revenue or cancelled fundraisers that had been scheduled during Harvey.

As Trevor Boffone, a Houston-based theater scholar, noted in his HowlRound roundup of small theater companies post-Harvey, “Houston’s smaller theatres [are] more likely to be without comprehensive insurance policies, or deep donor bases to stem the tide of inevitable loss ahead.”

Thankfully, the MATCH in Midtown, which has four performance spaces and houses resident companies like The Catastrophic Theatre, survived Harvey unscathed.

Rec Room Arts—a performance company based near Minute Maid Park that produces a range of work from plays to stand-up comedy—has organized an October installment of its ongoing LGBTQ event Story Hole, subtitled Holidays & Hurricanes, which will showcase Harvey-related stories from local writers such as Ryan Leach and Russell Etherton.

Kenn McLaughlin, the artistic director of Stages Repertory Theatre in Montrose, reluctantly cancelled 20 performances—10 of Always . . . Patsy Cline and 10 of Woody Sez—resulting in a loss of over $50,000 in ticket revenue. “That’s not going to kill us, but it is going to challenge us throughout the year to make up that loss,” says McLaughlin, who was particularly fond of the urgent political message Woody Sez offered to Houston audiences. “We have a board who will make sure we don’t run deficits. So we’re really lucky in the face of what others have faced.”

Despite a steep climb to recover the theater’s losses, McLaughlin remains optimistic—especially after Stages’ two-night revival of its 2014 production of Xanadu at the Miller Outdoor Theatre last month. The musical drew 9,000 audience members in the wake of Harvey. “There’s a line in Xanadu where a character says, ‘Just because there’s two wars doesn’t mean there’s no time for art!’” muses McLaughlin. “That had an incredible resonance when we did it after the storm.”

McLaughlin, who also teaches directing at Sam Houston State University, wants to uplift the spirit of the community, but is determined to keep challenging it as well. “You can deny global warming until the end of time,” McLaughlin says. “But we’re on, what, our sixth hurricane of the season? There’s only so much denial before we have to ask really hard questions about how we can be better with the community. That’s always our responsibility as artists.”