‘Battle of the Sexes’ premiere comes to Stages.

Editor’s Note: OutSmart will host a Balls viewing party for its family of advertisers, readers, and friends on Thursday, October 26. To request a complimentary ticket to the 7:30 p.m. show, email [email protected]. To RSVP, visit the Facebook event page.

Billie Jean King gets outed as gay in Balls, but the season-opener at Stages Repertory Theatre is mainly about King’s “Battle of the Sexes” tennis match with huckster Bobby Riggs, which played out like a circus under the big top of Houston’s Astrodome in 1973. 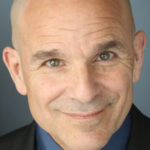 “I was around. I remember it very clearly, and the ballyhoo around it,” says gay actor Donald Corren. He portrays Riggs, a self-described male chauvinist, who famously claimed that, even at age 55, he could defeat any woman on a tennis court, including the then-29-year-old King, who was a recent Wimbledon champion.

“The play acts as a prism through which 1973 is seen as the very center of that whole cultural movement of sexual freedom, women’s rights, the Vietnam War, politics, and the nature of celebrity,” says Corren.

A sell-out crowd attended the tennis match on September 20, 1973, while another 90 million viewers reportedly watched it on TV sets across the globe.

Balls features a shot-by-shot reimagining of the entire match, “abstracted a little,” says Corren. “It moves in and out of reality.”

The veteran actor grew up about 80 miles east of San Francisco, in Stockton, California. “Stockton was the setting for the TV show The Big Valley, with Barbara Stanwyck,” he boasts.

Corren studied acting at The Juilliard School on Manhattan’s Upper West Side before “kicking around, sowing some wild oats, and starting my career in Chicago.”

A big break came when Corren followed Tony winner Harvey Fierstein as Jewish drag queen Arnold Beckhoff in Torch Song Trilogy, winning awards in San Francisco and Los Angeles for his starring role in the show’s tour. “Torch Song was revolutionary, because at that time [in the early 1980s] there were no gay heroes in plays,” says Corren. “If you were gay in a play, you committed suicide. Harvey did drag, so the show was autobiographical in that respect, but Arnold could have been a mechanic. He was just a guy who wanted a husband and a kid—and for his mother to accept him.”

In 2005, Corren made his Broadway debut as Cosmé McMoon, the closeted, Cole Porter-ish pianist in Souvenir. McMoon’s story would be retold in last year’s Meryl Streep movie Florence Foster Jenkins, with The Big Bang Theory’s Simon Helberg on the piano as Flo-Fo’s embarrassed accompanist.

Balls was written by Kevin Armento and Bryony Lavery (a 2004 Tony Award nominee for penning Frozen), and workshopped by One Year Lease Theater Company in New York, before Corren came on board to play Riggs in Houston.

“When we finish this month, we go back to New York and open off-Broadway in January,” he says.

“It’s a terrific script,” adds Corren. “It has the potential to be a really remarkable piece—extremely important, actually.”

According to One Year Lease’s artistic director, Ianthe Demos, “The play delves into the history of tennis and gender and so many other exciting and fanciful, crazy ideas.”

Kenn McLaughlin, the out artistic director at Stages, adds, “To take the seminal, historic event and crack it open in a modern and fresh way kind of breaks down the barriers of time.”

What: Balls
When: October 11–29, 7:30 p.m. on Mondays, Tuesdays, Wednesdays, and Thursdays; 8 p.m. on Fridays and Saturdays; and 2:30 p.m. on Saturdays and Sundays
Where: Stages Repertory Theatre, 3201 Allen Parkway
Tickets: stagestheatre.com