Pulitzer Prize-winning journalist Jose Antonio Vargas was 16 when he discovered he was not a U.S. citizen.

“I was at the DMV trying to get my driver’s license when I found out that my green card was fake,” recalls Vargas, who identifies as gay. “From that moment on, I began to hide. No one could know that I was living here illegally.”

Vargas, 37, recounts this and other experiences in his new memoir, Dear America: Notes of an Undocumented Citizen, an autobiography about his life as an immigrant. Vargas will read and discuss ecxerpts from the book at Talento Bilingue de Houston on Monday, September 24.

Dear America: Notes of an Undocumented Citizen, which covers the early ’90s to the present,sheds light on what it is like for some of the more than 11 million undocumented immigrants who live in the U.S, many of whom were brought here as children. 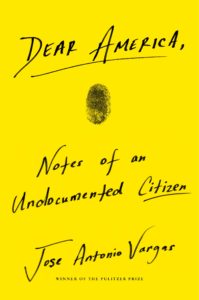 Born in the Philippines, Vargas was 12 when his mother put him on a plane that would connect him to his grandparents in California. After learning about his undocumented status four years later, he trusted only a few with his secret. Vargas’ confidants, his high school principal and a teacher, urged him to pursue journalism.

Another secret Vargas hid until his senior year of high school was his sexual orientation. Vargas says that growing up in Mountain View, one hour south of San Francisco, made it possible for him to be open about one of his identities.

“I decided to come out as a gay man because it allowed me to embrace at least a part of myself,” Vargas says. “Luckily, I grew up in a town where being gay was not only accepted, it was embraced.”

“This tour is not about immigration reform; it’s way bigger than that. It is about who the U.S. wants to be.”

After graduating high school, Vargas wrote for the San Francisco Chronicle, the Philadelphia Daily News, The Huffington Post, and was a part of the Washington Post team that won the 2008 Pulitzer Prize for Breaking News Reporting for its coverage of the Virginia Tech shooting.

In June 2011, Vargas went public about being undocumented in an essay for The New York Times Magazine, in an effort to promote dialogue about the immigration system in the U.S. In 2013, Vargas wrote, directed, and produced Documented, an autobiographical film that CNN News broadcast in 2014.

Though he has been open about his undocumented status for several years, Vargas says that he still lives in fear of being deported.

Vargas hopes his Dear America Tour will help spark a necessary and important conversation about the lives of undocumented immigrants.

“This tour is not about immigration reform, it’s way bigger than that,” Vargas says. “It is about who the U.S. wants to be. The tour is for Americans from all ethnic and racial backgrounds who have stake in the lives of undocumented people.”