Kameron Michaels, born Dane Young in eastern Ohio, stands apart from her fellow RuPaul’s Drag Race queens. While she’s far from the first “Muscle Mary” to turn up on the show, the Nashville-based former go-go boy is easily the hottest—maybe because of all those tattoos. A Drag Race fan-favorite runner-up who was bested by Aquaria in season 10, Michaels is currently on the Werq the World Tour, hosted by Bob The Drag Queen and featuring fellow Drag Racers Aquaria, Asia O’Hara, Eureka, Kim Chi, Valentina, and Violet Chachki. Werq the World visits Houston’s Wortham Theater Center on October 13.

In a season that featured competitors named Eureka, The Vixen, Miz Cracker, and Aquaria, how much value do you think is in the naming process of a drag performer?
I don’t really care about names. My name has nothing to do with my value as an entertainer.

What was it about RuPaul’s Drag Race that made you want to be a competitor on season 10 of the show?
I’m quiet but competitive. I knew it was my time and I knew it was my season. That’s why I sent in my audition tape.

One of the characteristics that set you apart from your competition is your “Body-Builder Barbie” moniker. Please say something about body building and your workout routine.
Well, now that I’m on the road and never at home, that unfortunately has taken a toll on my body. Before the show, I was in the gym six to seven days a week with a rigorous workout routine and a strict diet. It was the most important thing in my life until drag took over. 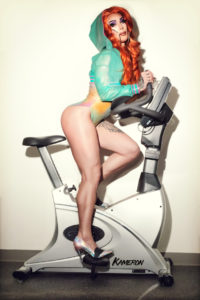 Which came first, your interest in hair and makeup, or drag?
Hair and makeup came first. Drag wasn’t on television when I was younger. [You couldn’t] really learn anything about drag until you were old enough to go to the bars.

Why do you think you survived so many lip-sync challenges on Drag Race?
I’m an entertainer in my soul. It’s what I do. People that didn’t even like me on the show have said that when they came and saw me live, they became fans. You can see the passion in a true entertainer when they step on the stage.

You also have a considerable amount of ink. What can you tell me about your tattoos?
I started getting tattooed when I was around 26 or 27. All my tattoos are by the same artist, and they were all done in about a year and a half. [They depict] favorite movies from my childhood and sentimental things in my life.

You’ve talked about being bullied as a child. Have you had a chance to meet any of those bullies who might be fans of Kameron Michaels?
No, I don’t really have any contact with anyone from my hometown. I’ve had some people reach out and apologize for the way they treated me, but that has nothing to do with the show. I left that place behind because I knew I was bigger than that.

You have an incredibly busy tour schedule, including several dates on the RuPaul’s Drag Race Werq the World Tour. What will you be performing on the tour?
I’ll be switching up songs here and there. The dancers and I have an evil-queen mix that I’m doing right now that we will probably revamp and keep. Anything else will be at my discretion.

Are you going to places on the tour where you’ve never been before? Which cities are you most excited about visiting?
I’m currently overseas on tour, so I’m seeing all of these cities right now. I honestly couldn’t even tell you where I’m going in the U.S. As you said, my schedule is so insane. I don’t even know where I’m going next. I check my schedule the week before, walk in my house for 24 hours, grab clean underwear, switch out costumes, and jump on another plane.

Finally, are you watching or did you watch the Ryan Murphy series Pose? If so, do you see a through-line from the drag balls of the 1980s to RuPaul’s Drag Race?
I have not seen the series, but I would love to veg out on my couch and catch up on it. “Walking” in balls is definitely something that has inspired Drag Race, as that is what we do. We walk in our looks. Paris Is Burning is a great representation of the ball scene, so I’m excited to see this new series and I’m very happy to see the trans community receiving the roles and recognition they deserve.