Brandon Woodruff came out flamboyantly at 18, joining the private gay party circuit, dancing late nights in Dallas’ flashy Station 4 club, and flying to Florida to star in pornographic movies under the name “Bradley Rivers,” after a studio scout spotted him shirtless on the dance floor.

All of that gaiety came to a tragic halt after only a year, with Woodruff’s arrest on two sensational murder charges and a subsequent life sentence that he is now serving in the Texas Department of Criminal Justice’s Hughes Unit in Gatesville. 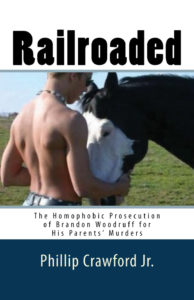 Woodruff’s plight—being wrongfully punished for a crime that he claims he did not commit—is the message of Railroaded: The Homophobic Prosecution of Brandon Woodruff for His Parents’ Murders, a new book authored by retired attorney Phillip Crawford Jr.; Texas Justice: Brandon Woodruff, a documentary under production by Scott Poggensee; and FreeBrandon.org, a website devoted to restoring the freedom of the former Abilene Christian University freshman and weekend party boy.

Crawford, a former New York litigator who now lives in Florida, and Poggensee, an emergency medical technician and novice filmmaker who lives in a Dallas suburb, are convinced that Woodruff, now 31, was innocent of the brutal double-murder of his parents in their home in Royse City in October 2005. They contend the investigation into the bloody murders of Dennis and Norma Woodruff, who died from multiple gunshot and stab wounds, as well as the prosecution and conviction of their son in March 2009 in homophobic Greenville, reflected an antigay bias. In their view, law enforcement officials, prosecutors, the judge, and the jury all allowed their religious convictions to overrule their reason, resulting in an innocent youth being incarcerated while the real killer or killers escaped punishment.

Crawford, who is also the author of The Mafia and the Gays, published in 2015, said he became aware of Woodruff’s case in April 2017 when he was browsing profiles on the Write a Prisoner website after reading about the program in a news story. After reviewing the briefs of the case and the news coverage of the trial, he developed doubts about Woodruff’s guilt. He viewed the evidence against Woodruff as flimsy, and he noted the prisoner had passed two polygraph tests.

“The case bothered me to my core,” Crawford says. “The risk that Brandon Woodruff was convicted based on the prejudicial effect of the homophobic narrative employed by state prosecutors was amplified, in my opinion, [by] the weak evidence against him. Something just did not seem right about his conviction; none of it made sense to me.”

The prosecution of Woodruff raised ethical questions before trial, when his attorneys discovered that prosecutors had eavesdropped on telephone conversations with their client in the Hunt County Detention Center where he was being held on a $1 million bond. The presiding judge ruled that prosecutors had violated Woodruff’s Sixth Amendment right to counsel, and he ordered the Hunt County district attorney’s office to recuse itself and allow the Texas Office of the Attorney General to take over the case.

In May 2017, Crawford wrote to Woodruff expressing his interest in writing a book, and the prisoner quickly responded with answers to his questions. Soon, Poggensee also reached out to Crawford, offering to share information he had acquired while working on the documentary. They joined forces in an effort to raise awareness about Woodruff’s case.

“The principal motivation was that I believe Brandon Woodruff has been wronged by the so-called criminal justice system—railroaded, if you will. The deeper I got into the case, the more outraged I became at the cumulative injustices against him, from arrest through trial, and conviction through appeals. The main focus for me was the homophobic narrative by state prosecutors against him in which a young gay boy’s coming-out process was treated as some sinister double life, essentially evoking The Talented Mr. Ripley.”

Poggensee said he first became aware of Woodruff’s case in 2005, immediately after his arrest. He was at dinner with two friends when Woodruff’s mugshot flashed on a TV screen in the restaurant. One of the friends said, “Oh my God, that’s my ex-boyfriend.” The filmmaker-to-be immediately became intrigued by the case.

“I had no idea who Brandon was at that point. However, his mug shot did not look like someone that could commit such a cold-blooded double homicide,” Poggensee says. “I realize you can’t spot a murderer, but he just looked too innocent to do something like that.”

Poggensee followed the case through its climax more than three years after Woodruff’s arrest. After the conviction, Poggensee wrote to Woodruff, and the prisoner finally wrote back to him a year later. They became pen pals, and Poggensee visited him in prison a couple of years later. The filmmaker obtained all of the public court records from the trial, and he studied them in an effort to get the “true picture.”

“In about May 2017, I finally just told him, ‘Brandon, if you want people to know about your case, you’re going to have to make some kind of movie or something about it.’ I didn’t think we could expect anyone to sift through tens of thousands of pages of documents, but I didn’t have any problem asking someone to sit through an hour-long documentary. It was from there I thought to myself, ‘I have a camera, and I have a computer. I can make the documentary.’ Little did I know what a massive project I was taking on.”

Poggensee says his motivation is stoked by outrage that the criminal-justice system can so miserably fail citizens, and that the public is so blind to what occurs. News coverage of Woodruff’s arrest and trial focused solely on the information fed to the media by the prosecution, he says.

“At some point, I think that we as a nation need to stand up and say, ‘Enough is enough,’” Poggensee says. “We need to not only fight for the falsely convicted, but to fight to make sure this type of thing doesn’t happen in the first place. Brandon’s situation could very well have been avoided if just one investigator or one assistant district attorney had stood up and said, ‘You know what? Maybe we don’t have the right person. Maybe there truly isn’t enough evidence to say this guy did it for sure. Maybe we need to take a second look at it.’ No one ever did that. Once they arrested Brandon, it became ‘Let’s prove Brandon did it.’”

Poggensee said there is speculation about who might have killed Woodruff’s parents, but that information cannot be revealed yet. “We’re not ready,” he says.

Both Crawford and Poggensee say they hope the book and the documentary will lead to an outcry from the public and a full review of Woodruff’s conviction by the Texas Court of Criminal Appeals. A three-judge panel from the Sixth District Court of Criminal Appeals in Texarkana expressed concerns about the legitimacy of the weapons produced as evidence in the trial, but it upheld the verdict in 2010.

Poggensee’s goal is to finish the documentary this month. He has already spent $30,000 on the project, in addition to his volunteer time. He notes that he reached out to everyone involved in the investigation and prosecution of Woodruff, and that none of them would participate in the documentary.

Contacted for this story, the Texas Department of Public Safety issued a statement saying its investigators “defer to the decision of the jury and appellate courts.”

“In all cases, as with this one, the Texas Rangers are committed to conducting thorough and impartial investigations,” the department said. “This includes gathering the facts and evidence, which are then turned over to the appropriate criminal justice officials, who determine the next steps in each case.”

Among those who’ve read Crawford’s book since its release in May is Katherine Ferguson, one of Woodruff’s defense lawyers. “I am the attorney who tried the case for Brandon,” Ferguson wrote in an online review of the book. “Mr. Crawford has done an excellent job of setting forth facts—not speculation or prejudice—that show Brandon Woodruff is innocent.”