Mistress Isabelle Brooks is the plus-sized diva with a plus-sized attitude to match. And she’s not afraid of a little blush and makeup to go with that head-boss stature. She’s the dancing diva with the disco fever, and there’s not a whole lot that can slow her down. Not even a broken ankle in 2019 could keep this lady from slaying the stage.

Pronouns?
Out of drag: He/Him/His; in drag: She/Her/Hers.

Drag birthday?
I’ve been doing drag since I was about 16 years old, so somewhere around eight years. However, I consider my 18th birthday on July 14, 2016, to be my drag birthday. It’s simpler to remember, and it’s when I actually started viewing drag as a career.

What got you interested in drag?
I remember when I was about 14, I saw GIFs of RuPaul’s Drag Race Season 4 on Tumblr. I instantly fell in love with not only the show but also the art of drag itself. It combined so many of my interests into one big self-expression, and I remember it being so magical to me.

Describe your drag persona.
I like to describe my style as over-the-top traditional drag with a modern twist. You can come to any of my shows, any night of the week, and you can expect to see big hair, glamorous outfits, and performances that captivate and entertain an audience. My drag is carrying the legacy and magic of what inspired me as a young person in this community. Unfortunately, “old school” drag is a dying art form, and it’s up to this next generation to continue [that old-school tradition].

What got you into wig making?
Hair has always been a passion of mine, and before drag, I envisioned a career as a hairstylist. My love for hair led me to styling all my drag wigs, and queens would always ask me, “Girl, who did that hair?” Once it caught on, and through word of mouth, I was doing hair for queens all over. At the beginning stages of my drag career, it was something I would mainly do just for myself and a select handful of performers. Then in December 2019, I broke my ankle and the pandemic happened, so I had to find a way to take care of myself financially. I started hustling and pushing out wigs to queens all over the world.

You’re nicknamed The Heavyweight Champ on Instagram. Tell us more.

One day I was performing, and the show host introduced me as “The Heavyweight Champ.” It stuck with me, and truly spoke to my spirit. I always come through swinging. Anything I do, I give 100 percent. If I fall, I’m going to get right back up and try again. Anything I do, I will always come out on top. To me, that’s what being The Heavyweight Champ means.

#TeamPopSong or #TeamBallad?
Definitely #TeamBallad. I think it’s a lost art in both the music industry and for drag entertainers. Everyone wants to break their spine death-dropping, but it takes a special queen to truly captivate an audience with a ballad.
Marry, Shag, Kill: Batman, Superman, Kool-Aid Man?
Shag Batman, marry Superman, and kill the Kool-Aid Man because he’s obnoxious to me!
Where can fans see you perform?
I am a show director at JR’s on Monday nights for Where The Boys Are. I’m at South Beach on Wednesdays for Millennial Dolls. Last, but certainly not least, I am one of the original cast members at Hamburger Mary’s, where you can find me every weekend.

WHAT TO READ NEXT: Dynamite Drag Illusionist – Barry Mii Dandy 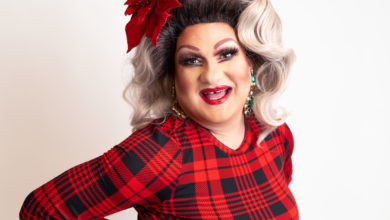