Original Soundtrack Recording
Loving Annabelle
The movie about transgenerational lesbian love won all kinds of festival awards, but oddly none for the rich score by Aurah’s Marc Dold and Judith Martin who describe their music as “organic electronica.” Especially alluring is “All Over Me,” featuring Lindsey Harper. Massive Music America (www.aurah.com).
— Review: Nancy Ford
________________________

Janet Jackson
Discipline
Looking more lithe than ever and sounding just as lovely, Miss Jackson (because I’m nasty) says she considers the concept of discipline a blessing, not a burden. Either way, her 10th studio album’s title cut, Discipline, is likely to become a favorite among National Leather Association members. Steamy and intense, especially Missy Elliot’s guest shout on “The 1.” Island Records (www.islandrecords.com).
— Review: Nancy Ford
________________________

Michael Jackson
Thriller 25
That’s right, a quarter-century has passed since The Gloved One birthed the world’s biggest-selling album (engage reverb) OF ALL TIME. Kanye West, Fergie, and others appear in new MJ collaborations on this reissue of the mega-platinum original, plus a DVD with three versions of the Thriller short film, footage from Motown 25, the previously unreleased “For All Time,” and more. What indecency-with-a-minor lawsuits? Legacy/Epic (www.legacyrecordings.com, www.epicrecords.com).
—Preview: Nancy Ford
________________________

Dame Shirley Bassey
Get the Party Started
Does the world need a Bassey version of the Pink hit? Probably not, but it isn’t bad. The superior tracks from this 70th-birthday-celebration disc are remixes by top London DJs and producers of Bassey classics and a new recording of “The Living Tree” by the hip UK duo Never the Bride. Decca Records (www.deccalabelgroup.com).
—Review: Tim Brookover
________________________

Keram (Malicki-Sanchez)
Box
He sings, he acts, he writes, he produces—he does it all. This Polish-Ecuadorian Renaissance man presents an unassuming and thoroughly enjoyable acoustic collection of tunes; the quirky, haunting “In the Mourning” stands out. We’re not sure if he is, though. Out, that is. Constant Change Music (www.keramsongs.com).
—Review: Nancy Ford
________________________

Diane Schuur
Some Other Time
A playful, relaxed style has always distinguished Schuur’s work, a quality that is showcased on this salute to her jazz roots. A swinging version of the great Gershwin tune “Night Work If You Can Get It” kicks off this 13-track set, which includes singular takes on “Blue Skies” and other standards. Concord Jazz (www.concordmusicgroup.com). —Review: Tim Brookover
________________________

Supreme Beings of Leisure
11i
The 11 tracks of the gayish SBOL’s sophomore electronica album expounds on such weighty themes as quantum physics and devastating global changes prophesized by some spiritual disciplines in the year 2012. Trippy, but very listenable. Rykodisc (www.sbleisure.com). —Review: Nancy Ford
________________________

Dianne Reeves
When You Know
This premier jazz vocalist has won an unprecedented four Grammy awards, including one for her musical contribution to George Clooney’s Good Night and Good Luck. With her re-do of stellar standards by Minnie Ripperton, Michel LeGrand, and others, she’s likely to get a fifth. Available April 15. Blue Note Records (www.bluenote.com). —Preview: Nancy Ford
________________________

COMEDY CD:
Todd Barry
From Heaven
The dry, wry Barry explains in one track that a friend of his responded to a classified ad for a roommate that mentioned “must not be homophobic,” only to be shown a one-bedroom apartment with two beds, side by side. The potential roomie then explained he was a gay prostitute. “I hope you’re not homophobic, because I’ll be having sex with strange men, all the time, just a few feet away from you, for money. I hope you like small animals,” Barry continues, “because I have cock fighting in the kitchen.” Comedy Central Records (www.ComedyCentral.com). —Preview: Eric A.T. Dieckman 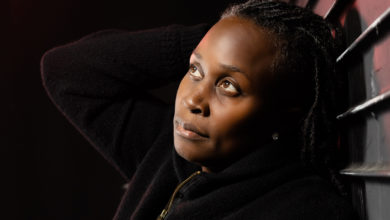