Bravo’s hit show Top Chef has landed in H-Town for its 19th season, and the stakes couldn’t be higher considering the top-notch culinary scene that our city is known for.

One contestant looking to take home the Top Chef honor is Austin’s Jo Chan. The out-and-proud chef is counting on her sure-fire combination of grit, cultural influences, and vast experience to impress the judges and add a Top Chef title to her lengthy résumé.

“When I was 15 years old, I took my first geometry class and realized I wasn’t going to be an architect. That dream was basically dead,” Chan laughs as she recalls how she got her start in the culinary world. “From a cultural perspective, food brought my family together. My family is full of immigrants, and one day it just clicked. I started to spend more time in the kitchen and it felt like a one-way street to where I wanted to be.”

“Growing up, it’s rare to see people like you when you’re watching TV. Top Chef was a show that had chefs that looked like me, and that made me feel OK to be who I was.”

Chan, a first-generation American, explains that her multicultural upbringing was heavily influenced by both food and career expectations. “My family is Chinese, but my parents were born and raised in the Philippines. Ethnically we are Chinese, but culturally we’re definitely more Filipino.”

When her family emigrated to the States, they landed in Los Angeles. “Since my family are immigrants, it was really important for me to get a college degree—whether I ended up using it or not,” she says. “I went to San Diego State University and then went directly to culinary school.” Her ability to attend San Diego Culinary Institute was part of an agreement she had with her parents. “I told my parents I would get a college degree if I could go to culinary school. I was so hungry to get there.” After graduating, Chan’s career took her to New York City. “My internship was in New York, and from that point my career took off. My very first restaurant I worked at was Nobu Fifty-Seven.”

Today, Chan resides in Austin while serving as the executive chef at Eberly. Being chosen as a Top Chef contestant is a dream come true for this queen of the kitchen, who has spent years keeping her head down while honing her craft. “When I was growing up and wanting to become a chef, Top Chef  was at the height of its popularity. I remember watching early seasons and setting the benchmark of being chosen to compete as a goal.” Chan paid her dues, did the work, and saw her dream come true. “I put it on the back burner because I didn’t think I was at that level. But last year I was approached by casting to apply, and I was chosen to be on the show!”

Combining the many influences from her upbringing, her work in New York, and now her experiences in Texas, Chan explains that her culinary style is quite eclectic. “From a cultural perspective, I’ve learned to cook a lot of Asian food, but my focus is California Italian.  [I picked up a lot of that influence in New York] working for Justin Smillie and Jonathan Waxman,” she explains. “Coming to Texas, I quickly realized that the seasons are very different. We have two: hot, and not very hot. In New York, everything was hyper-seasonal.”

At Eberly, Chan celebrates and blends her experiences seamlessly into the restaurant’s menu. “Eberly classifies as a New American restaurant. We incorporate a lot of Italian and Asian flavors, combining influences from my upbringing and where I’m at today.”

Anticipation for the latest season of Top Chef  has been building in Houston ever since it was announced that the city would host Top Chef  judge Padma Lakshmi and her crew. Although Chan can’t give away too many spoilers, she says the Texas influence will be heavily featured on-screen. “Texas offers its own unique flavor. We have a real pride and style of food that’s quite different,” she says. “I was in culture shock when I first got here. The way we use smoke, the styles of food, and the way we do casual food is really incredible.”

As a cultural hub that prides itself on having some of the best food in the nation, Houston has definitely made an impact on Chan. “Houston has such a different landscape than Austin. My fiancée and I love going to Houston for a change of pace from Austin,” she says. “Chris Shepherd’s restaurants are a big stop for us. My friend Travis opened Ostia in Montrose. We worked together at Barbuto in New York, and I never thought we’d end up being neighbors. It’s a huge flashback for me to go to that space. It feels a lot like home.” Rounding out her list of favorite things to do in Houston, Chan says, “I love Rosie Cannonball, and I always try to get dim sum when I’m there because it’s a little harder to get that in Austin.”

Her newfound platform is one that Chan doesn’t take lightly, particularly as an out gay woman. “Growing up, it’s rare to see people like you when you’re watching TV. Top Chef was a show that had chefs that looked like me, and that made me feel OK to be who I was,” she recalls. “You don’t realize how good the moment is because you’re putting in so much work, but this process made it so visible to me. I went to a Catholic high school that didn’t claim me when I was there, but they do now [after I made it on Top Chef ]. There are small ways we’ve moved the needle with representation. Everything I’ve done in my life has been to further my career and celebrate the people in my restaurants, but if there’s some way I can move the needle by just being me, it’s really incredible and I feel the epic responsibility of that moment.” 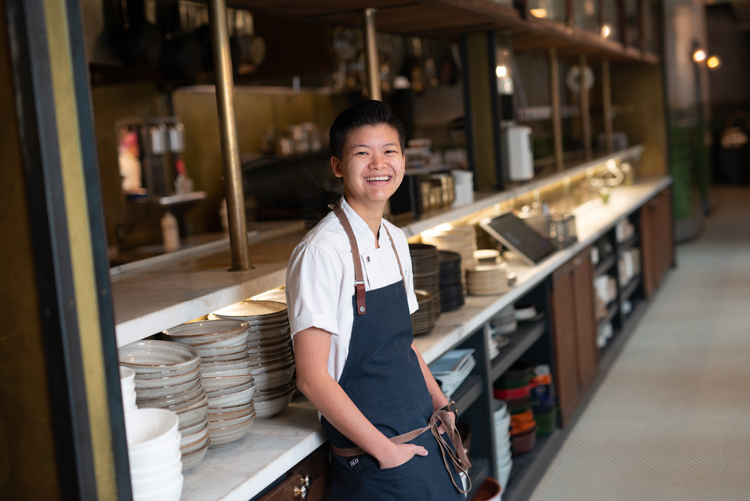 From cooking in the kitchen with her family to being on Top Chef ’s national stage, Chan has put in the work from a very young age and is now basking in the moment. She sums up her advice to aspiring chefs by saying, “Put your head down and work hard. In most kitchens I’ve worked in, I let my work speak for itself. I was so fortunate to work for such amazing chefs that made space for me and celebrated who I was. They never made me feel strange, or like an outsider.”

Pulling from her experience with another culinary expert, Chan sums it up well: “Anthony Bourdain once said, ‘The restaurant kitchen may indeed be the last, glorious meritocracy.’ That is so true. Every single day, I work so hard and try to be the best I can be. That speaks volumes, and gets you very far in this industry.
I never chase down recognition—it’s always just found me, based on the hard work I put in. And I’m really grateful for that.”