For Houstonian Adonis Directo, 41, yoga was a calling he never saw coming. Directo grew up in Houston, but was born in Quezon City, Philippines. “Oh great, now everyone knows the answer to my website security question!” Directo jokes.

A graduate of the University of Texas at Austin, Directo holds a B.A. in history and a B.S. in kinesiology and exercise science. “Though it’s much more fun to say I majored in story time and gym. I was heavily involved in marching and concert bands, too. I was the first Asian American Pacific Islander president of my college band.”

“Yoga gives you an opportunity to unplug for fifteen minutes, thirty minutes, an hour. Meditate, flow, and be present. Breathe. Then go tackle all the other things.”

When he was growing up, Directo only wanted to be one thing: a Care Bear. “Oh, how the universe ironically granted me that wish,” Directo muses. “I’m certainly more of a bear now than I was when I was a little kid, that’s for sure. I just knew I wanted to help others and make people happy.”

Directo first came to yoga in the early 2000s when an older fraternity brother (who he idolized) advised him to take classes other than weight training to complete his kinesiology degree. “In other words, I was a young twink hanging on every word of a hotter, older, muscular guy. We all know that story,” Directo, an openly gay man, admits. “I also took a separate non-movement yoga class [that emphasized its] history and philosophy to fulfill a cultural requirement for my history degree.”

So how did Directo discover that yoga was his thing? Well, he actually discovered that it was his everything. “It was athletic. I stretched and strengthened muscles I didn’t know I had. It was contemplative. I enjoyed the meditation. It was captivating. I liked hearing about the mythology and history. It was fantasy. One minute I’m a dog, another minute I’m a warrior, another minute I’m a bird in flight. It was unifying. I loved being in a group moving as one. Really, it was everything to me—being powerful, being graceful, acknowledging that you’re alive by moving and breathing.” 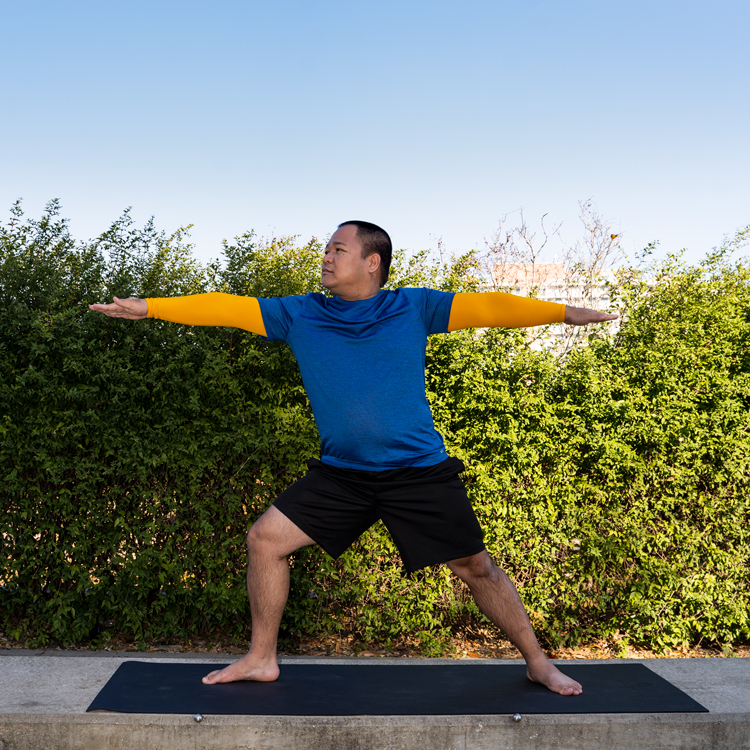 The only thing that inspires Directo more than watching his yoga students fall in love with yoga is being a student himself. “I like to learn from others. To be an effective teacher, you also have to be a student and continue to learn. Adapt, grow, and do it again!”

Although his day job in medical sales limits the time he can spend teaching yoga, he actually prefers it that way.“ “If I was doing and teaching yoga all the time, it would lessen the joy that I get from it,” he says.

Directo’s boyfriend of four years, Alexander, is an educator and content specialist at a charter school.

For several years, Directo was involved with Bunnies on the Bayou, thanks to the insistence of his best friend, David Goldberg. “I wanted to support him while he was in that group’s leadership, and do something for the local community, so I did.” Directo is still active in a few LGBTQ excercise groups, as well as a group for gay yoga instructors.

The one thing Directo wishes people knew about yoga is its deep roots in the ancient history of India. “You have to honor and respect the source material, so as to not culturally appropriate it. Yes, yoga has evolved more into [a style of] exercise, but there’s a rich history, philosophy, and mythology behind it,” Directo emphasizes. 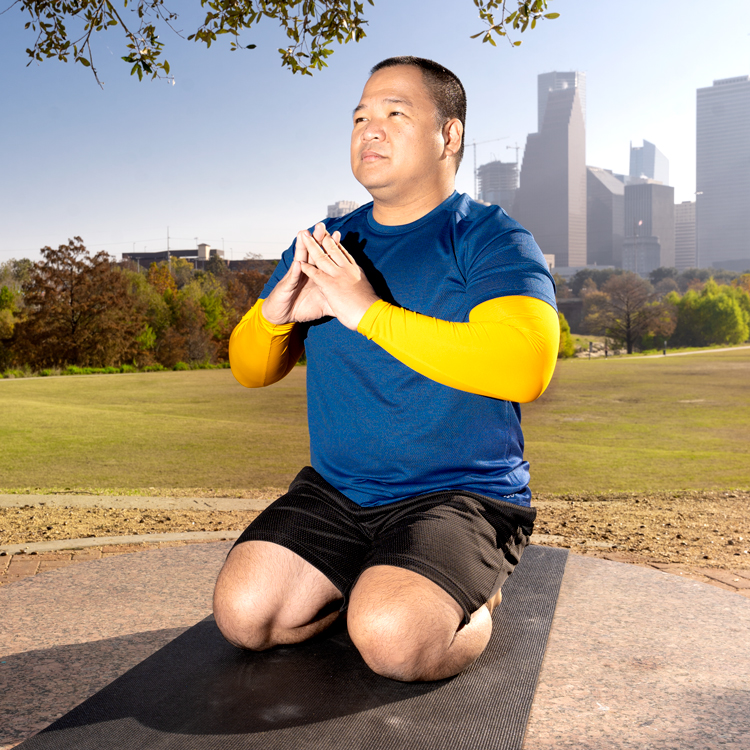 And if you’re nervous about trying yoga for the first time, not to worry, “There is a plethora of varying styles and types of yoga. Yoga is for everybody!” he says. “Yoga gives you an opportunity to unplug for fifteen minutes, thirty minutes, an hour. Meditate, flow, and be present. Breathe. Then go tackle all the other things. If you’re in “go” mode all the time, you’re gonna burn out and run out of fuel.”

When it comes to Directo’s hopes for a better world in the New Year, the passionate teacher offers a lesson worth remembering: “Honor the ones who paved the way for you. Support each other. Help each other grow. Learn from others. Say Please, I’m sorry, and Thank you.  Tell the ones who you love that you love them—and do it often.”