The openly gay Olympic high-jumper, Port Arthur native, and current Houston resident is laser-focused on becoming the best—ever—in her sport.

Although athletic achievement came early and easily for the ultra-talented McPherson (a Texas state champion as a freshman in high school), maintaining that level of success has at times been more difficult.

McPherson, now 31, captured the U.S. indoor track and field championship in both 2013 and 2014, as well as the U.S. outdoor championship in 2014. However, her struggle with depression led her to self-medicate with drugs at one point. In 2014, she tested positive for a banned substance, resulting in a 21-month suspension from international competition. She later finished in a somewhat disappointing tie for 10th place at the Rio Olympics in 2016.

But the Inika McPherson of the past is a far cry from the confident, inspiringly intense, and ultra-polite woman with whom I had the privilege of speaking recently about her career, and life beyond track and field.

Joanna O’Leary: So, I think readers will find it entertaining to hear how I first came to know you. We met while you were training for the 2016 Olympics at my gym in Houston. I remember thinking, “I cannot believe I am working out in the same space as an Olympic athlete.” After recovering from my fan-girl moment, I learned you were a local. What was it like growing up in Port Arthur?
Inika McPherson: [Laughs] You know, it was full of love, but also full of hate. There were gangs, and definitely folks on both sides of the track. I had family members affiliated with gangs. You had to figure out early how you wanted to live your life and where you wanted to focus your attention. I decided I wanted to focus on being the best athlete I could be. Fortunately, I had a lot of support from area track clubs. They really motivated me to become the athlete I am now. 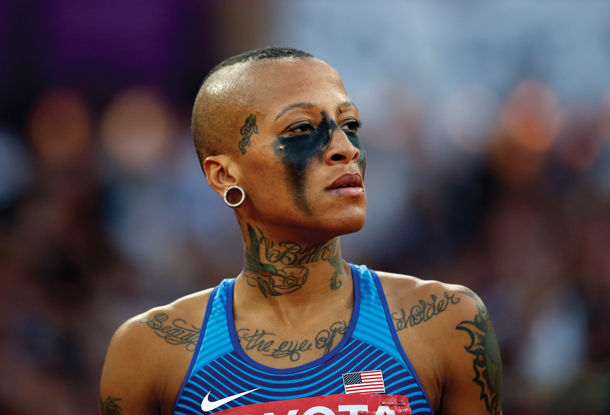 Were you always drawn to track, and specifically to jumping?
I loved playing basketball. That was one of my passions as well. But when it came time for high school, one Port Arthur high school was really good at basketball and the other one was good in track and field. My mom made me go to the track and field school, and even though I cried at the time, I’m happy I did because that’s how I got into the high jump.

Did you have a moment, while you were just starting out with jumping, when you thought, “You know, I think I could be really good at this”?
Yes, from the beginning. Back in fourth grade, when the gym coach taught us about the high jump, I loved it and I gave it my all. And then when I starting competing with the track club and I saw I was winning a lot, I thought, “I could really go far with this.” Because I was a shorter jumper, many people thought I should focus on other things. I didn’t even have a coach, but I felt a fire burning inside of me. I decided, “This is what I’m gonna do; this is what I’m gonna be.” And I have always loved a challenge. I decided that I wanted to show people that anything is possible.

Do you have a particular mentor or hero in track and field, someone whose career you model yours after?
I actually love Jackie Joyner-Kersee. Even though she wasn’t a high-jumper, per se, because she did multiple events, she was such a strong woman and didn’t let anything get in her way. She was always doing her own thing, not caring what other people thought. She really inspired me to keep working hard.

Roger Federer famously called Serena Williams “the greatest tennis player of all time—man or woman.” And Williams herself has noted she does not want her accomplishments to be evaluated through the lens of her sex, let alone her race. Given your similar status as a gay female athlete of color, have you faced issues with regard to feeling “boxed in”?
Definitely. Because of the way I look and dress—I am of mixed race—it’s more about people trying to figure out what I am. I have diverse roots, including Scottish and West African heritage. I love everything that has made me who I am today. And I’m a little tomboyish, but that doesn’t mean I don’t love being a woman. I was born a female, and I will die a female. It’s interesting to me how people interact with me or how their perceptions change depending on what I’m wearing. Depending on my look, they might call me “sir” or “homie.” I like to have fun: On a red carpet, I might feel a little feminine and wear a dress. Maybe another day I’ll wear a baseball cap. I believe everyone should be able to feel that free.

For me, though, I don’t look at race when I see people. But as a person of color, I stand strong for the empowerment of our culture. There’s a difference between race and culture. I have followed my community’s struggles through history—the Jim Crow laws, etc., and the struggles we still go through today. I hope to help break down those barriers. I want people to see that if I can do it, you can do it. I know what history we’ve come from. We’ve come a long way since then, and we need to keep pushing forward. I want to be known as the greatest high-jumper, period.

Sports is often referred to as the last frontier for LGBTQ rights. Can you speak to the challenges associated with being an openly LGBTQ athlete?
I really haven’t faced any challenges head-on as others have. And when I say “head on,” I mean to my face. I don’t have sponsors yet—I’m not sure why, because there are other LGBTQ athletes with sponsorships. I’ve witnessed discrimination and feel (like with anything) that if you stay positive, positive results will follow. I stay strong in my being and hope that others will too, and not feel they have to conform to be a part of society as a whole—[both in and out of the] sports arena.

I love seeing your throwback photos of the Rio Olympics. Do you think about the next Tokyo Olympics in 2020, or are you just hyper-focused on what’s immediately ahead, such as your next major competition in September?
Oh, yes! I’ll be there in 2020, and I’m going to win it. That’s going to happen. I’m going to win gold and have the American record and hopefully the world record. But to do that, I have to sacrifice. Sometimes I still get tempted and want to go out on the weekends. I can’t. I have to focus and work hard for the next three years.

Obviously, a lot has been written about your past struggles—the drugs, the ban, etc. You seem to have transcended those times. What have you learned?
Although I do want to keep it in the past, it is something I definitely talk to kids about. For me, so much of it came from depression, and so many kids these days are depressed. Partying won’t help. Don’t go down that road, because it’s hard to dig yourself out. I tell them to talk to someone—anyone. Reach out for help.

What might life have in store for Inika McPherson after high-jumping?
I was talking to a friend the other day about how to strategically brand myself after I leave the sport. It’s extremely important to me to teach youth high-jumpers. There are so many talented kids in the United States who don’t have coaches—or coaches that really care or are knowledgeable about the sport. I want to change that. I see kids out there working so hard, and no one is with them. My dream is to have a local indoor facility for track and field, and have the kids do a camp once in a while so they can have the opportunity to train with professionals.

We’re also filming a documentary now that chronicles my journey to Tokyo. I have had the dream of going to the Olympic games forever. And while you always want to win it, that was not always my focus. I didn’t have the mindset that I could win it. I had to change that, going into the next games.

Finally, I know you are very strict with your diet, but can you share with us your favorite cheat or reward meal?
Oh, man—chips and queso, or enchiladas. I love that!