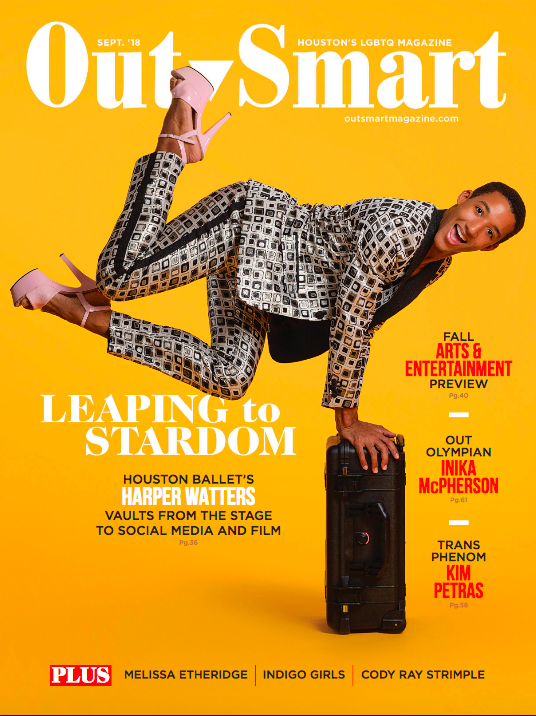 Are you registered to vote? If not, the deadline is October 9.

As of this writing, we are 66 days from the most important election of our lifetimes—and just 51 days from the start of early voting. As David Webb notes in this month’s Rare Reporter column, the future of the LGBTQ equality movement hangs in the balance.

Speaking of midterm elections, what’s wrong with this picture? Montrose, Houston’s gayborhood, has long been represented in Congress by an anti-LGBTQ Republican. As writer Brandon Wolf notes, Democrat Todd Litton is trying to change that in November.

In Unapologetically Trans, columnist Monica Roberts explains how black women are the cornerstone of the progressive movement, and will be a driving force behind the Democrats’ blue wave in 2018.

At OutSmart, we embrace diversity, and this issue is another case in point. The cover features Harper Watters, a Houston ballet soloist who is leaping to stardom in social media and film. Don’t miss Gustin’s story and Ashkan Roayee’s dramatic images of Watters.

Skeleton Crew is part of an impressive lineup of shows and concerts in Houston this fall. For a full rundown, check out D.L. Groover’s annual Arts & Entertainment Preview.

Finally, Block chats with Houston’s own Vickie Shaw, the popular comedian who is headlining this year’s Queer Queens of Qomedy Tour. Needless to say, Shaw wants everyone to come out to the show at Neon Boots on September 8.

“I also want everyone to vote,” Shaw says. “I know I’m preaching to the choir. But we have to vote and get our friends to vote.”