Houston’s only LGBTQ volleyball league serves up its 30th season.

Twenty-four years ago, Gary Grier joined the Lone Star Volleyball Association (LSVA) to connect with the community and become more comfortable with his sexual orientation.

“I have never missed a single season,” says Grier, a team captain and former regional director of the North American Gay Volleyball Association. “I wanted to develop positive relationships and confidence [while playing] a sport I love.”

As Houston’s only LGBTQ volleyball league enters its 30th season, Grier is as involved as ever. In 2017, he received LSVA’s Casey Richardson Service Award, and he is already registered to participate in the 2018 Gay Games in Paris. 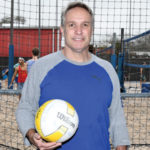 “Fortunately for me, I have played on some wonderful teams that had success on the court,” says the 53-year-old Grier. “My goal is to hang on until 2020 and attempt to win a medal in four consecutive decades.”

On February 25, more than 150 athletes descended on The Zone sportsplex to kick off LSVA’s pearl-anniversary campaign. Open play continues at 6 p.m. each Sunday, and people of all experience levels are encouraged to join. “You don’t have to be an expert to play,” says 30-year-old Shawn Kuehn, LSVA president. “All you need is a desire to experience sportsmanship and camaraderie in a safe space for the LGBTQ community and allies.”

The season culminates during Easter weekend with the Lone Star Volleyball Classic Tournament, which brings in over 500 athletes from across North America.

“Within the volleyball community, Houston is certainly on the gay volleyball map, despite not having men’s volleyball in our school systems,” Kuehn says. “Obviously, there are some havens in New York, the Midwest, or California that produce some great players, but we fare pretty well.”

LSVA was founded in 1988 and participated in its first national tournament in 1989. In addition to providing a safe place for the LGBTQ community to gather and socialize outside of bars, the organization is well-known for its philanthropic efforts, including the annual Miss LSVA Pageant. “In the early ’90s, [LSVA’s awards-banquet theme was] ‘The Best Little Whorehouse in Texas,’ and we’d dress up as ‘whores’ to raise money to donate to charity,” Kuehn says. “In 2002, [the league] officially created Miss LSVA, a charity drag fundraiser extravaganza. They’ve since crowned 15 queens and helped the organization raise approximately $150,000 to donate to the community.”

LSVA places a strong emphasis on being open to everyone, regardless of age, race, gender identity, religion, sexual orientation, or political affiliation. Grier recalls the story of a young player coming to the league several years ago. “A couple brought their teenage son,” Grier says. “He was not quite 18, so we asked the parents to come each week as chaperones. They said he had come out to them and wanted to have an uplifting experience and to meet and make gay friendships. He played that season and really loved it. Later, he won a scholarship from the Montrose Center’s HATCH Youth program and noted that the LSVA experience helped shape his identity and created positive self-esteem.”

Thain Allen, 38, has played with LSVA for seven years. “Both watching and playing sports has been a big part of my life since I was a kid, but they aren’t big for most of my close friends,” Allen says. “It’s been great to find an inclusive place to play sports. While it’s mostly gay, all players are welcome—I’ve also met and become close friends with several straight players through LSVA.”

Tongue-in-cheek team names are another important component of any LGBTQ sports league, and the LSVA is no exception. “My team name is Gay for Play because our original team had a couple of straight players,” Allen says. “We formed the team name well before the RuPaul show, so I’m pretty proud of that.”

Kuehn says LGBTQ sports leagues are essential to a healthy community. “They provide a safe space for all people to be social and active outside of the bar scene,” he says. “It also brings together different sects of the LGBTQ community, as well as allies, to work together in a fun, healthy way.

“I’ve made many friends from all walks of life that I would have never met if it were not for volleyball,” he adds. “Once you’re on the court, gender, sexuality, and political views are irrelevant. All that matters is how you play, and that you enjoy it.”