One man’s meat is another woman’s poisson

What an incredible job I have. In addition to the privilege of pouring out my own personal tragedies and triumphs and bugaboos to you—a monthly literary therapeutic self-purging, if you will—I get a lot of free stuff. Deliveries of goodies and giveaways arrive almost daily, all designed to catch the eye of a writer who might recommend or simply mention the item in print, thereby planting a bug in the ear of you potential customers.

Music, books, movies, clothing, food, electronics, jewelry, toiletries—I receive unsolicited bribery baubles of every description. One Christmas I enjoyed a “Jingle Bra,” a noisy little piece of lingerie bedazzled with tiny bells. It was designed for someone with an A cup, so I used it as a hot chocolate cozy.

Once I received a huge box chock-full of adult novelties of every shape and size, designed to appeal to every inclination. Its arrival eliminated the bulk of my Christmas shopping that particular year with the mere stroke of my signature on the FedEx delivery guy’s computer pad. My friends were thrilled with their gifts, and my mother appreciated her new double-headed door draft stopper.

Yes indeed, I love my job.

At least one very specific, very graphic picture answering O’Donnell’s query springs to mind, but decency prevents me from elaborating in this column.

Now that I’m on the leeward, lowered-hormonal side of life, my personal bedroom habits have changed. For the most part these days, if I want to impress a woman in my bedroom, we watch Jeopardy! To be fair, it was necessary to recruit some friends to help me with the burdensome challenge of reviewing these films. I’m generous that way.

Abandoning the party plan, I farmed out the movies to those same lesbian friends (who are of various multigenerational hormonal levels, by the way) for individual private review. My friends chose from films with scenarios like real estate agent/client, college dorm room encounters, and other predictable setups. Providing an odd element of realism, the police-themed film, it turns out, was based on the true story of a cop-killing in Los Angeles. Eww. But the softball team-themed film held promise.

A night or two later, the reviews were in. Regardless of the reviewer’s age, the general consensus was a big thumbs down. Or somewhere.

• “Too much time on the tanning beds before filming. Hellooo…you don’t touch a burn!”

• “One woman looked like Opie Taylor with a strap-on.”

• “Where are the condoms? Have they never heard of HPV? Wrap those dils!”

• “Too many fake breasts. Nipples pointing in different directions are a distraction.”

• “Hated the cheap linens. Stay away from floral prints—too busy.”

Regardless, I appreciate that bottle of Merlot. Cheers! 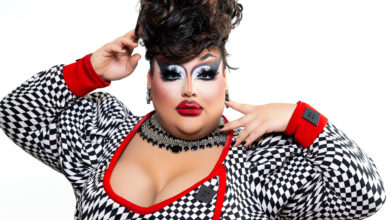