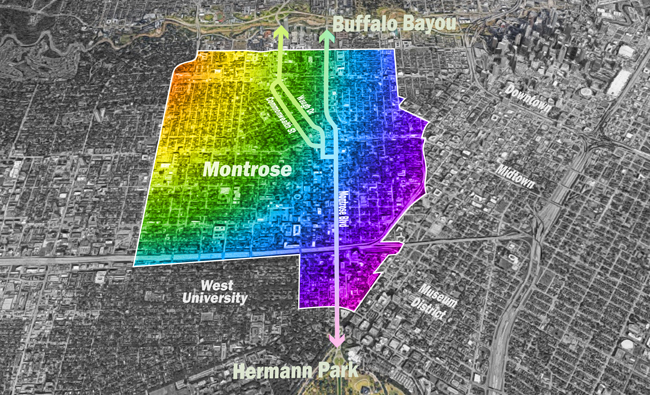 When the new developments stretching for blocks around the northeast and southwest corners of Montrose Boulevard and Westheimer Road were announced, it was difficult to find a Montrose local who was neutral on the matter. That peculiar intersection—a hodgepodge of noisy traffic, pop-up memorials and protests, and eclectic street art—has long been considered the beating heart of Houston’s LGBTQ gayborhood.

The northeast intersection at Grant Street will soon see the opening of Montrose Collective, a development by real-estate developer Radom Capital. The project’s promotional material boasts of a four-story, 197,000-square-foot enclave of five buildings with retail storefronts, restaurants, office space, and a 600-car parking garage. The Montrose branch of the Houston Public Library will also relocate to the development from its longtime home at 4100 Montrose Blvd.

Another new development, which is slated for the intersection’s southwest corner, is yet unnamed. The 3-acre tract was formerly anchored by a large strip center that was home to local favorites including Spec’s Liquor and Half Price Books. Skanska USA Commercial Development, the company that built the Philip Johnson Bank of America Tower downtown, bought the prime Montrose retail plaza last August. The company said its plans are likely to include a mix of apartments, offices, shops, and possibly a boutique hotel.

These Montrose additions are just two examples of the new construction in the five-square-mile Montrose area, which is home to about 23,000 residents.

The City has permits on file for more than 250 demolitions in the neighborhood since 2018. Strip centers, townhouses, condominiums, and Midtown-esque midrises have quickly sprouted on those vacant lots.

Texas Monthly once stated that “Montrose is the coolest neighborhood in the state,” thanks to its unique venues, small businesses, restaurants, and LGBTQ history. With the dramatic rise of commercial development across the area, is the ’hood at risk of losing this distinction? OutSmart asked five seasoned LGBTQ Houstonians with strong ties to the city’s beloved gayborhood.

JD Doyle is a highly regarded historian who has documented Houston’s LGBTQ community on his website archive since 2014. Much of the area’s story would be lost without his meticulous record-keeping.

“I feel sad when I see Montrose today. It has been the center of so much of my life, and it has changed dramatically. It’s turning into something like Kirby Drive now,” Doyle says.

When asked to identify ‘the final straw’ for him, he recalls the year that Houston’s LGBTQ Pride festival and parade moved from Montrose’s quirky streets to the glass canyons of downtown.

“I was lucky enough to ride in the Pride Parade as the official male grand marshal the last year it was held in Montrose. There was just nothing like the feeling of turning the corners on the winding street, seeing the faces, hearing the crowd. I understand why it had to move, but [the parade] is so big and commercial now. Like Montrose, it’s not the same,” Doyle laments.

Community activist Jack Valinski has spent years working to make Houston’s GLBT Political Caucus into the political force that it is today. Valinski knows Montrose well, and its longtime residents even better. As a result of his involvement in the Caucus’ massive mailing list, Valinski has insight into where Houston’s LGBTQ community lives. Is he seeing that community moving elsewhere?

“There have been some eye-opening shifts,” he admits. “There are a good number of caucus voters in the Heights, but there’s been a surge in the Oak Forest and Spring Branch areas. They are joining the civic clubs! And I was surprised by the turnout in Riverside and along the I-45 corridor.”

“It’s a wonderful thing,” he adds. “We used to circle the wagons around Montrose for safety, so we could live freely in an accepting community. Now we live everywhere. We are no longer relegated to the gay ghettos.”

Perhaps nobody has done more for Houston’s LGBTQ community than former Houston mayor Annise Parker, who was the first out mayor of a major American city.

Parker’s roots run deep in Montrose. She is on her fourth home in the neighborhood, and her view is somewhat less romantic than you might expect.

“It is a myth that Montrose has been gay-owned. It has been home to gay bars, but LGBTQ citizens lived in scruffy, rented apartments. We have never been the majority property owners. However, it has always been an accepting, tolerant community. That part is true,” Parker says.

The former mayor reminds us that while Montrose provided LGBTQ Houstonians with a sense of connection, it also set them up as targets.

“When I moved to Montrose, teens were driving in from the suburbs on the weekends, holding tailgate parties and clogging Westheimer so they could stare at the ‘freaks,’” she explains.

So when did it start to improve? “I am not sure,” she says, “but I know it hit its low point in 1991, when Paul Broussard was murdered. Here we had some kids who drove into Montrose for trouble. When they stopped Paul on the street [near the gay dance club Heaven], one of the teens rolled the car window down and yelled, ‘Do you know how to get to Heaven?’ Then one of them killed him.

“After that, we added the Q Patrol to keep our community safe,” Parker notes.

Still, she has no plans to leave. “I love its walkability and the older homes, the trees. And I love the sense of community here. I didn’t leave when things were rough, and I don’t think I ever will,” she concludes with a smile.

As a member of Houston’s LGBTQ community and vice president of communications for the Greater Houston Partnership, A.J. Mistretta deeply values Montrose’s history, but is committed to guiding Houston toward a prosperous future.

“Montrose is changing, but the Castro in San Francisco, Boystown in Chicago, and the Village in New York are not the same, either. All this gnashing of teeth over ‘changing Montrose’ is out of touch,” Mistretta says.

“Montrose is a couple of miles from downtown, and we cannot be a world-class city if we hold on to what we used to be. We can either move into the higher-density required for a major city, or we can hang on to a past that is already gone. I know it’s a hard pill to swallow, but it is the truth,” he continues.

For some, a changing Montrose means having more exciting options. Bill Baldwin, one of Houston’s leading residential real-estate professionals, is the owner of Boulevard Realty and an LGBTQ community member who is devoted to the Houston Heights.

“Montrose is undergoing an evolution. LGBTQ real-estate buyers have been steadily moving out to other neighborhoods because ‘the neighborhood feel’ has been lost, and that can now be found in other communities such as the Heights. And being gay is an asset here in the Heights—almost like you are the ‘cool’ one!” Baldwin says with pride.

“Much of [the reason for the LGBTQ migration out of Montrose] has to do with being priced out, and the fact that townhouses and large-scale developments changed the feel and function of ‘the gayborhood.’ The Montrose of yesteryear is gone, never to return,” Baldwin concludes.