Houston’s 2020 Pride celebration has been postponed due to COVID-19.

Pride Houston, the organization that puts together Space City’s LGBTQ festival and parade each summer, announced this and several other updates during a digital Pride kickoff party on April 30.

“Given the impact of this pandemic, we have come to the unanimous conclusion that the only viable decision is to postpone Houston’s 2020 Pride Celebration with a target of fall 2020,” Pride Houston’s president Lo Roberts said.

Even though this year’s late-June event—which is themed “Houston Is Divercity”—has been delayed, Roberts noted that they would continue hosting smaller events that follow social-distancing guidelines throughout Pride month.

“We are still working out the details for what our 2020 celebration will look like, so more details are to come,” Roberts said. “However, understand that we will still have smaller pop-up events throughout June until the fall, as the City allows it, to celebrate life, love, culture, the arts, and this beautiful divercity.”

During the April 30 kickoff, Pride Houston also announced its 2020 grand marshals. Individuals and organizations nominated as Pride grand marshals have made significant achievements and considerable contributions to the LGBTQ community at large, according to Pride Houston’s website. 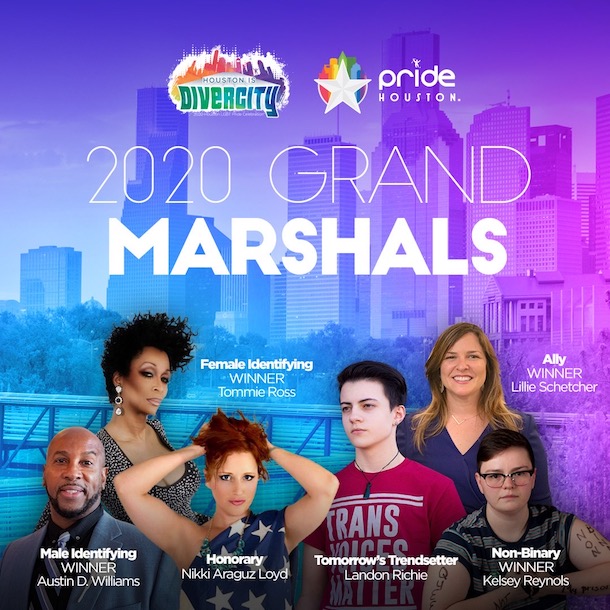 Despite the change in plans, Roberts reminds Houston’s LGBTQ community that “Pride is around us at all times.

“Always remember, after every storm there is a rainbow,” Roberts said, “and for us, that rainbow is Pride Houston 2020!”

Tune in to a message by Pride Houston president Lo Roberts here: