According to the sage advice of Maria von Trapp, sewing is just a needle pulling thread. What she leaves out is that the thread can weave together wacky stories and ideas to create art. Enter Dennis Nance—an artist-turned-sewing-maven who has used the craft to rejuvenate his creative side.

When Nance is not busy showcasing the work of other Texas artists as a curator at the Galveston Arts Center, he creates his own masterpieces—mostly shirts and costumes—at his Houston abode in Glenbrook Valley, located near Hobby Airport.

Cacti. Pineapples. Pick out any object, and he’ll sew it. Nance’s craftsmanship extends so deep that he boasts he doesn’t own a shirt he hasn’t created. If he finds a print he’s attracted to, he’ll create something out of it. It’s something he’s done ever since getting his first sewing machine in his early teens. As an art enthusiast, he finds sewing tugs at his heart strings.

“I’ve been doing art my whole life, but I’ve played around a lot with sewing in the last 10 years. I try not to take it so seriously. I find when I try to make ‘Art’ with a capital A, it doesn’t go there. But when you’re having fun with it, it can be enjoyable and go down that road a lot easier,” he says.

Nance’s fashions are just as picturesque as they are fun. His take on Thanksgiving? It’s a ham. And his impression of a Christmas feast is roast-worthy.

The artist’s shirt-making skills took off when he met his partner, James Hays, seven years ago.

“Early in our relationship, I was new at sewing and making things, and he had ‘Friday’ shirts,” Nance recalls, describing Hays’ tattered shirts reserved for the last day of the workweek. “I made him shirts as a gift, and I’ve been making them ever since. We call it Weird Wear by Dennis and James. It’s a way for us to have our name on something together.”

From there, Nance’s artistic talent kept growing, resulting in costumes, impromptu photo shoots, and participation in the occasional parade. Recently, he created Cast of Characters, a calendar featuring a different costume for each month. His work has been shown at the Contemporary Arts Museum Houston, BOX 13 ArtSpace, and the Menil Collection Bookstore. 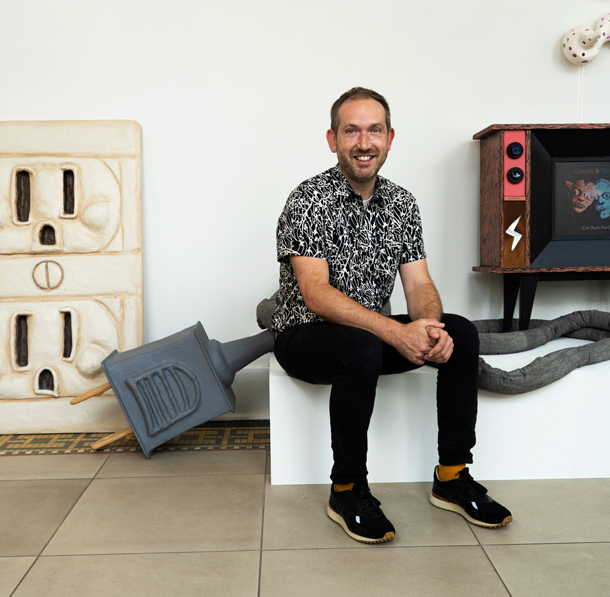 It’s all part and parcel of what the artist says is expression and fun, which he extends into his job at the Galveston Arts Center—a fitting playground for his unique style.

“My job is working with artists throughout the state. There’s constantly a creative dialogue happening. I work with contemporary artists in Texas who push the concept of traditional media. It’s not traditional, it’s usually pushing the boundaries.”

Nance’s work at the Center is a way for him to bring art into a community he feels is sometimes overlooked by the art world. Houston is bustling with galleries and exhibit space, but he enjoys bringing some of that same experience to the island.

“It’s a different landscape. There’s a different rhythm. I get to go all over the state and bring artists to Galveston. It’s an interesting environment to play in. You can get into serious topics, or get into humor,” he says.

After spending so much time traveling the state in search of new artists, Nance says he enjoys getting to slow down and take in the island experience.

“It’s a really nice place. I like looking at the horizon [over the water] and seeing a different landscape,” he admits. “They’ve preserved their history, including the building I work in. They’re really committed to preserving the architecture, which is nice to see.”

Cat Butt Parfait: Chuck & George Explore the Ecosystem of Domestic Feline Digestion is on display through August 16. The Galveston Arts Center is open 11 a.m.–5 p.m. Tuesdays through Saturdays, and 12–5 p.m. Sundays at 2127 Strand in Galveston. For information, visit galvestonartscenter.org or call 409-763-2403. Admission is free.