Anthony “Tony” Gray and Keith Liles met 10 years ago through the ManKind Project, a men’s self-development organization. “We had mutual friends in the group, and our paths crossed at different trainings and service projects over the years,” says Liles, who serves as clinical director and program manager for Harris County’s STAR Drug Court Program.

It was during a social dinner in October 2007 that they first recognized a deeper attraction that would lead to the type of connection neither had expected.

When Gray, an accountant in the oil industry, finally worked up the courage to ask Liles out, he learned that Liles’ heart belonged to another—Baylor University. To this day, Liles jokes that Gray is first in his life “behind Baylor.”

The two were as different as two men could be. “Keith is a proactive planner who will have every detail scheduled weeks or even months in advance,” Gray says. “I, on the other hand, can plan ahead but typically do not. In the early days, his intense focus on planning and my carefree spontaneity resulted in much friction.”

It was while sheltering in Gray’s high-rise condo with two dogs and a cat during Hurricane Ike that they decided to heed Cupid’s call and make a life and home together.

When it came time for Gray to pop the question, he knew only one location would do: anywhere the musical Wicked was being performed.

“The reason Wicked is so appealing to me is that it’s a story about the power and perseverance of underdogs,” Liles says. “As gay men, especially at our age, who grew up during a time when being closeted was the norm, verbal and physical abuse was common. In Wicked, Elphaba and Fiyero have to fight against society’s persecution so that they could be true to themselves. In doing so, they find love—just as we did.”

Gray planned a New York City trip in July 2015 so they could see Wicked at the Gershwin Theatre, and secretly arranged for a backstage tour after the show. While Liles was inspecting the props and special effects, Gray patiently waited at center stage. When Liles joined him, Gray dropped to one knee, and with the cast of Wicked present, Gray popped the question.

Liles and Gray wed on Saturday, October 29, 2016, in the rooftop garden of the historic National Cash Register Building in down-
town Houston, which now serves as the residence and offices of their friends, attorneys Deborah Keyser and James Stafford.

The private event for 45 family members and close friends was officiated by judge Denise Bradley of Harris County’s 262nd Criminal District Court, one of Liles’ colleagues at the county’s STAR drug program .

The vows they exchanged were taken from notes written eight years prior, two months into their relationship, when they discussed their future together. “I told Keith that my intention was to hold on to him, this great guy I was learning to love,” Gray says. “I couldn’t believe how lucky I was that he was interested in me. I saw a future with him that was—and is—full of possibilities. If he could see [himself] through my eyes, he would see a father to the lost, a steadfast son, a protector of animals, and an amazing, loving, giving, and patient partner. We waited so long to find the right one. We are beautiful together and deserve the gifts we bring to each other.”

Gray recalls the exact words he said to Liles on their wedding day: “I take you today as my husband, and see this as enhancing what we have shared for nine years. You complete me.”

In his vows, Liles called their relationship “the most beautiful connection of two souls I’ve known.”

“My intention around this relationship is to live for the day, not to dwell in the past or to dream too long about the future, and most of all, to not in any way sabotage out of fear what God so graciously gave us,” Liles says. “I want to know this love every day and every minute, and celebrate it and rejoice in it, for we deserve it.”

After their rooftop garden ceremony, the wedding party was transported to The Grove restaurant at Discovery Green for a buffet-style luncheon. The reception was held that evening at the Parador in the Houston Museum District.

The theme of the reception was Wicked, of course. More than 200 friends came in costume for a one-of-a-kind cocktail and dining experience complete with life-sized puppets, a Cirque du Soleil acrobat who performed while suspended overhead, a live performance of “Defying Gravity” sung by the lead characters of Wicked, and a costume contest with prizes of Wicked memorabilia. Finally, inter-nationally renowned female impersonator Tasha Kohl, who is a friend of the grooms, tore off the roof with her comedic rendition of “It Shoulda Been Me”—complete with a wedding gown and veil.

Kelly, a member the National Association for Catering and Events, won the group’s Wedding of the Year award for the creativity of the event. “So much planning went into this,” Kelly says. “It took months to secure all the talent, and two days to build the sets and stage. Every drop of sweat was worth it when I saw the smile on Keith and Anthony’s faces.”

For their honeymoon, Gray and Liles went on a cruise from Galveston with four other couples. “We couldn’t think of a better way to celebrate our nuptials than with some of our dearest and most supportive and loving friends,” Gray says.

Watch a video from their wedding and reception below. 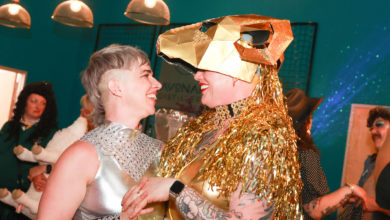 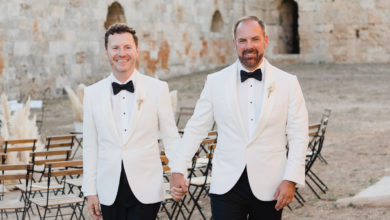 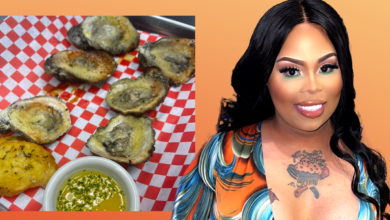 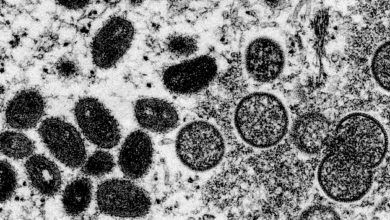