Brian Duong has always had a passion for food. But he only started cooking after his mother refused to buy him fried macaroni and cheese bites at a Burger King drive-thru when he was 11 years old. “I got so mad, because I really wanted those,” he recalls. “So I decided, ‘You know what? Lemme start cooking for myself.’”

While spite kick-started his culinary career, his sweet tooth inspired him to open a bakery, and his love for the word bitchin’ pushed him to name his business Brian’s Bitchin’ Bakery.

Just in time for the holidays, he is expanding his offerings by collaborating with other local bakers. “I hope to collaborate with other small businesses, continue to pop up at markets and local events in Houston (and possibly Austin and Dallas), and begin to ship my goods nationwide!”

Baking is important to Duong for many reasons. Not only does it fulfill his creative instincts, but it has also helped him get through difficult times in his life. As a freshman at the University of Houston in 2014, Duong was depressed because he wasn’t sure what he wanted to do with his life.

“I was surrounded by driven, independent individuals who already knew what they wanted to be. I just told people I wanted to be an optometrist to get [them] off my back, but internally it was killing me,” he admits.

He was also dealing with anxiety related to his sexuality. Although he was ready to come out to his family as bisexual, he feared they would reject him. “I know they love me, but I just hear stories of people coming out, and it doesn’t always turn out for the best.”

So Duong turned to baking as a way to relieve stress. “Just having that moment to myself where there’s nothing in the world going on but me and my stand mixer, it’s just really relaxing and peaceful.”

Everything worked out in the end for Duong. When he came out, his family accepted him and apologized for making him feel like he had to live in fear, because they only wished for his happiness. He also found some career direction after a veterinarian saved his dog, a tiny Bichon Frise named Kipper, when it was attacked by a massive Dalmatian in 2014. After Kipper came home from the successful surgery, Duong remembers looking his dog in the eye and saying, “I wanna do what she did for you and for me.” 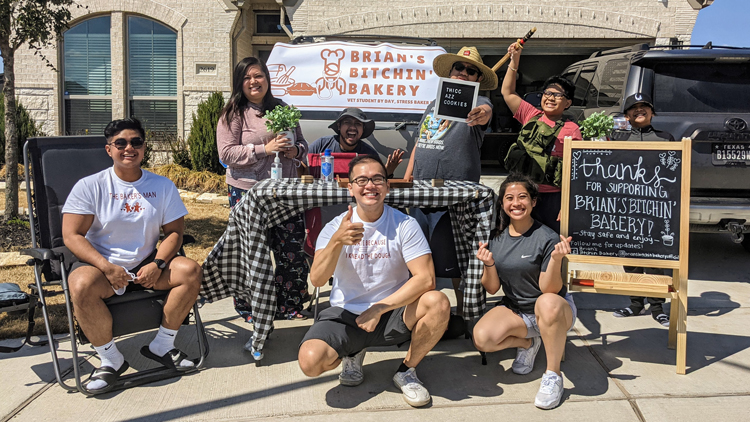 Duong joined the UH Pre-Vet Student Association in 2016 and became the organization’s president in 2017. He later got a job as a vet technician and was accepted into the Ross University School of Veterinary Medicine on his first try in January 2020.

Adding to his list of achievements, Duong opened his bakery in November 2020 after his friends and coworkers told him how delicious his homemade cookies were.

“My family always said, ‘Oh my God, whenever you open the café, I’ll be the first customer!’ It wasn’t until my friends and co-workers tried it and liked it that I considered opening a bakery.”

Brian’s Bitchin’ Bakery also became a way for Duong to give back to the community. In addition to the proceeds he’s donated to The Trevor Project, he’s also funded The Beacon, a nonprofit in downtown Houston that helps homeless people. When hate crimes against the AAPI community skyrocketed after the Atlanta spa shooting, he donated 10 percent of his proceeds to relief funds for the victims’ families. “Having the opportunity to create and share my passion for baking was such a privilege that it was only right for me to give back,” he shared in an Instagram post.

Duong says managing a small business has been stressful but invigorating. He and his mother once stayed up till 5 a.m. to package over 100 cookies for his first pop-up sale at Plant Market Sunday, which opened that morning at 9 a.m. “It was definitely a rough beginning, but exciting enough to continue. It’s interesting to look back and see how much has changed and how much I’ve learned since then,” Duong says.

Indeed, much has changed since he opened Brian’s Bitchin’ Bakery. Before he left for vet school in late May, Duong sold over 2,500 cookies across four markets, two events, a wedding, and a pop-up. A returning customer once adjusted their work schedule to get a cookie, another came in early to buy one of everything, and one patron came back a few minutes after purchasing cookies to buy more because she ate the ones she meant to share.

His desserts have impressed many people, including other local confectioners. “Brian definitely takes the time to create flavors that are unique,” says Karen DeGuzman, the owner of Butter Baby Bakery. “Try his desserts, and I’m sure you’ll find a favorite!”

Duong left the vet school he was attending because it failed to support him educationally and mentally. He hopes a program in Texas will accept him and provide him better academic opportunities.

When he’s not working as a full-time vet technician at VCA Lexington Boulevard Animal Hospital, he is preparing to sell at markets by going to several grocery stores in search of ingredients. He’s already planning his 2022 menu.

People can support Duong by sharing his social-media posts, buying his desserts, and offering feedback after they’ve tried his cookies.

Vivian Tran, a long-time friend of Duong, encourages people to support him for many reasons. “You’re buying from the real deal—he’s part of what makes Houston so great, and he’s a succinct example of our city’s raw talent and indomitable spirit.”