No matter what comes his way, comedian Bob Morrissey has always tried to find the humor in life.

“I have always loved laughing,” he says. “It draws me out of my shell. I think my favorite quality in someone is a sense of humor.”

Morrissey, who moved to Houston from Chicago in 2004 after being discharged from the Army, has had a knack for comedy for as long as he can remember.

“Comedy is something I have always had a passion for. I always wanted to be a comedian, but I did not start until I was 32. For the last nine years, I have been trying to make up for lost time by putting myself out there as much as possible.”

“I believe the funniest jokes come from the darkest places,” he says regarding his Comedy Bath House appearances. “The things you cry about or are afraid of make you laugh the most. I regularly make jokes about being deployed in the Army, my sexual experiences—stuff like that.”

While Morrissey frequently mentions his sexuality, he does not classify his humor as gay-centric.

“Yes, being gay is very central to my act. It is something I always talk about. However, I do not think I [target] gay audiences or just do gay comedy. I try to create comedy that anyone can laugh at.”

Morrissey has also started producing a regular podcast titled The Healing Club, where listeners can get to know a different side of the comic.

“On the podcast, it is not always comedy-related,” he explains. “I talk about my real-life experiences. The podcast is sort of a way to bring attention to the entertainment and art community in Houston—all of my friends that I have met.” 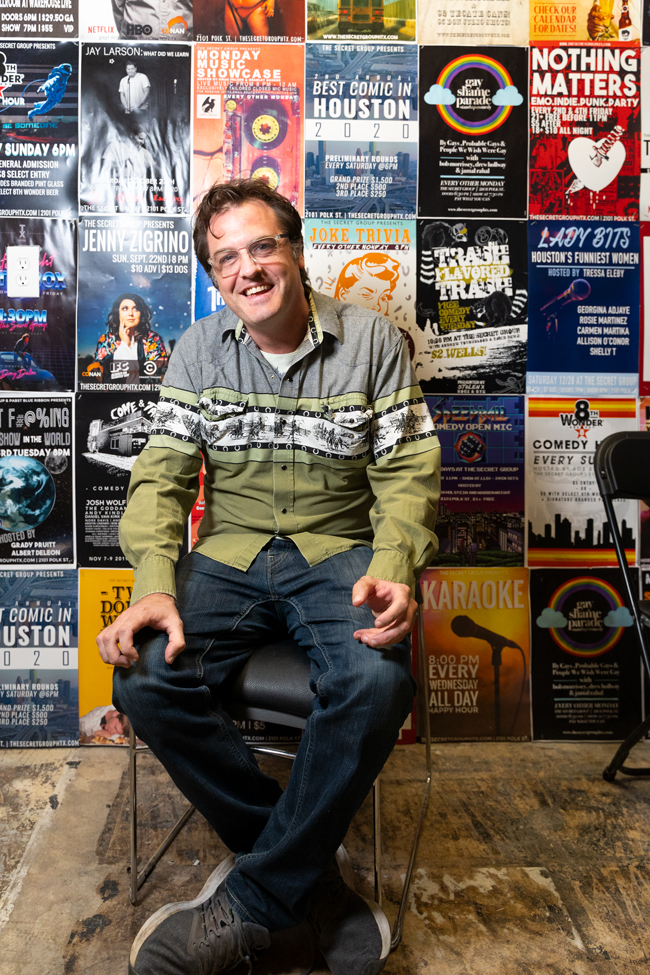 The podcast is also a way for Morrissey to share his writings, diary entries, and life experiences. “I think that is one thing that separates it from other podcasts. Some episodes are improv-based comedy. But it is a lot of things. I talk about books that I am reading, and just life overall.

When asked about his career ambitions, Morrissey is quick to point out that he is not trying to get famous with his comedy performances or his podcast.

“The goal is just to have fun, whether I am doing standup or podcasting,” he says. “I am not too focused on getting famous. That ambition is important to me, but if I was too focused on that, I would not have any fun on a day-to-day basis.”

In Morrissey’s eyes, the Houston comedy scene is special. Several comedians from the area have made it big—most notably SNL’s Andrew Dismukes, Comedy Central’s Matthew Broussard and The Daily Show’s Ashton Womack, all of whom Morrissey used to hang out and perform with.

As Morrissey describes it, Houstonians have a sardonic sense of humor, full of roasting and edginess.

“Houston is a great place to start your comedy career, but you have to have tough skin to make it. There is a brutal honesty to the comic scene here that separates Houston from other cities across the country.”

Morrissey truly appreciates performing in Houston, mostly due to the distinct melting-pot nature of the population.

“There are no barriers between Latino comics, lady comics, gay comics,” he notes. “We all work together, and that is what makes Houston unique.”

Now, more than ever, people need comedy in their lives. Because of the pandemic, people want to be engaged and get out of the house to be entertained.

“People have always enjoyed comedy. It is available in such vast quantities these days. I think comedy is exploding right now because it is so easy to put together and produce. I cannot imagine a world without comedy and people having fun together.”

Listen to Bob Morrissey’s The Healing Club podcast on Spotify and Apple Music, and get tickets to his Comedy Bath House shows at tinyurl.com/5s4x2csv.