Why? Because we had just said to a couple of men passing by us on the narrow sidewalk on our block, “Wear a mask!”

In less than a minute, my husband was hit in the face and the back of his head with some kind of weapon and laid unconscious on the sidewalk.

The NYPD and a NYFD ambulance arrived quickly. Francisco—still unable to talk—was taken to the ER at the old St. Vincent’s Hospital (so many also horrible memories). I drove around with police officers to “canvass” the neighborhood and see if I could ID the perpetrator. Frankly, I was too hysterical to be of any use to them. Nonetheless, I will never forget the kindness the officers showed me.

Like most crime victims, I immediately blamed us. Why did we say anything? We deserved it.

Bullshit! If we had a president with one shred of decency, wearing a mask would have been established months ago as a moral norm, a way to show care for others. And, if that wasn’t enough, not wearing a mask would be a federal offense carrying a hefty fine. It would not be up to hapless store clerks, flight attendants, and average residents to enforce the law. 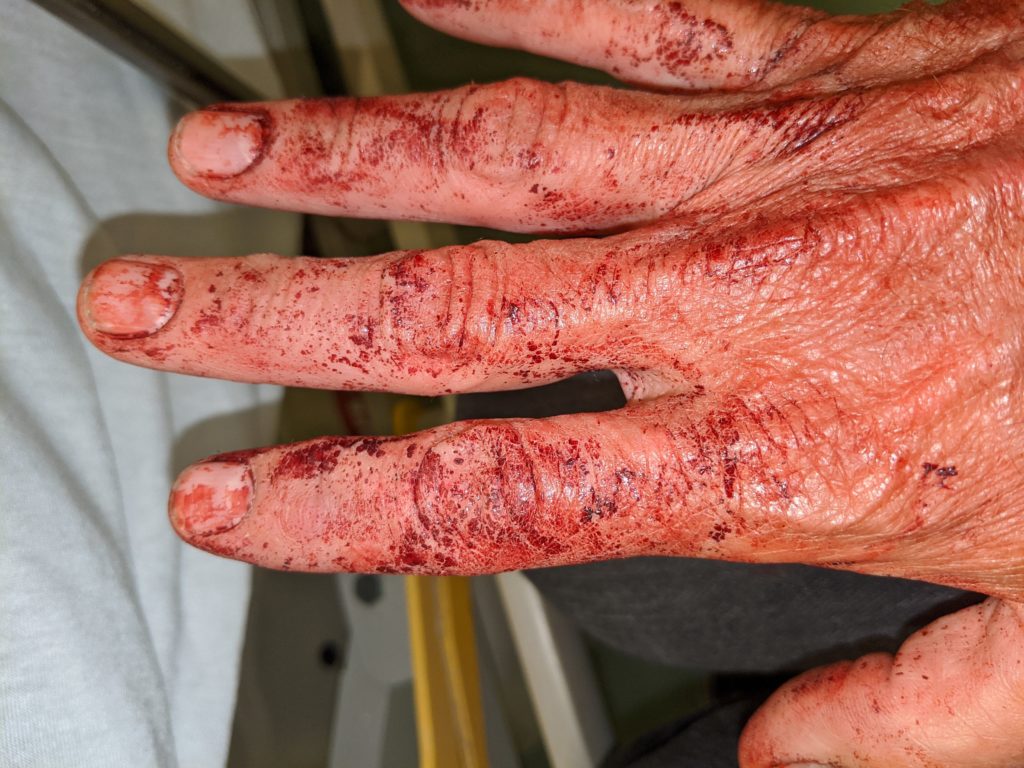 But no.  The issue of wearing a mask has been weaponized quite literally, as witnessed by the blood stains on our sidewalk and all the other mask-related violent encounters we read about every single day.

Meanwhile, an entire sector of “Christian” leaders has not only stood silent, they have actively encouraged mass gathering without masks. As my mother would say, Dear Jesus!

I simply cannot believe how far down our nation has fallen in just a few years or that there is even a question about the need for profound and systemic change. In November, let’s start at the top.

Epilogue—Francisco is doing well—staples are out of his head (lovely scar), no teeth lost, and the symptoms of his severe concussion seem to be fading each day. The NYPD say that while they have been able to obtain a clear video of the incident, they haven’t been able to ID the attacker. If they can, it should be a felony charge—good! The ambulance and emergency room bills were just over $12,000. Because we are among the few Americans who have good insurance, our out-of-pocket will be under $1,000.