Gay actor says 50-year-old ‘Hair’ is as relevant as ever.

Beads, flowers, and joy make the actors’ clothes fall off in Hair, the “American tribal love-rock musical” that comes to the Island Etc. theater in Galveston March 9–April 7.

“I absolutely love this musical,” says director Kim Mytelka, who is staging the show for the third time in the 15 seasons of Island Etc., also known as the East End Theatre Company.

“It is a very historical play, set in 1968 during the Vietnam War and the civil-rights movement,” she explains. “We hadn’t even dealt with gay rights; we didn’t even have women’s lib. The birth-control pill had just been introduced, along with free love. The universal theme was accepting one another and loving one another.” 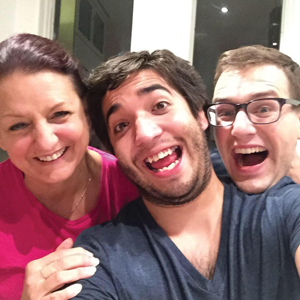 “The original did the nude scene at the end of Act One, supposedly celebrating the body and freedom,” Mytelka says. “There was a big parachute-like piece of fabric with holes in it that the cast disrobed under, then stood up full-frontal. It became more of a financial sell and fairly exploitive. I want the scene to flow more naturally, as people ‘couple up’ at that point. No one has to remove clothing, but those who are comfortable will. However, our stage is really close to the audience, so I don’t encourage full-frontal.”

Among those still debating last month about whether to “take it all off” was Justin Gonzalez, an openly gay actor who plays Woof and leads the “tribe” in performing the song “Sodomy.”

“I am not opposed to getting naked onstage; I am very open to it, but not just for the sake of being naked,” Gonzalez explains. “The way we’ve approached it in rehearsal is very organic, so when we get to that part, it should be very fluid.”

Whatever Gonzalez decides, his fiancé, Cameron Dunbar, will be watching from just a few feet away, as the production’s stage manager. “Cameron is a brilliant actor and director as well,” Mytelka says.

The couple met in 2014 when Dunbar played Brad in The Rocky Horror Show at Etc. “I was just a phantom,” says Gonzalez, who next played Jesus in Godspell, with Dunbar portraying the character who sings “We Beseech Thee.”

Gonzalez, who will turn 27 during the run of Hair, is a Galveston native who graduated from Ball High School in 2009. “I was definitely an actor all four years,” he says. “My junior year, I was Joseph in Joseph and the Amazing Technicolor Dreamcoat. My senior year, I was voted ‘Hollywood-bound.’ Hollywood isn’t necessarily my idea of becoming an actor, but everyone thought of me as ‘that guy.’”

Mytelka, now 60, also graduated from Ball High. “If you’re my age, you know the music from Hair,” she says. “Several numbers became very popular radio songs: ‘Hair,’ ‘Good Morning Starshine,’ ‘Aquarius,’ and ‘Let the Sunshine In.’” A favorite ballad from the show is “Easy to Be Hard.”

The original Broadway production of Hair, with book and lyrics by Gerome Ragni and James Rado, and music by Galt MacDermot, was nominated for two Tony Awards (Best Musical and Best Direction of a Musical), and its best-selling album won the 1969 Grammy Award for Best Score from an Original Cast Show Album.

A 2009 Broadway revival was nominated for eight Tonys, including Best Performance by a Leading Actor in a Musical for openly gay Gavin Creel as the tragic, conflicted Claude, who is drafted to serve in the Vietnam War. (The show’s militant black tribe member, Hud, calls the conscription “white people sending black people to make war on the yellow people to defend that land they stole from the red people.”) The production won the Tony for Best Revival of a Musical.

Creel returned to last year’s Tonys, winning Best Featured Actor in a Musical as Cornelius Hackl opposite Bette Midler in the still-running revival of Hello, Dolly! (a much more conventional Broadway musical comedy from the ’60s).

Gonzalez, who was featured in a number of productions at Southwestern University in Georgetown, where he graduated with a bachelor’s degree in musical theater, says his favorite thing about Hair is performing in a true ensemble show.

“It is exhilarating to create this family of people who fight for the right to be who they are,” he says. “Sometimes, it feels like we are fighting for the same rights today because the social climate of the ’60s is so relatable again. These are people who say, ‘We are not going to be silenced by the government.’”