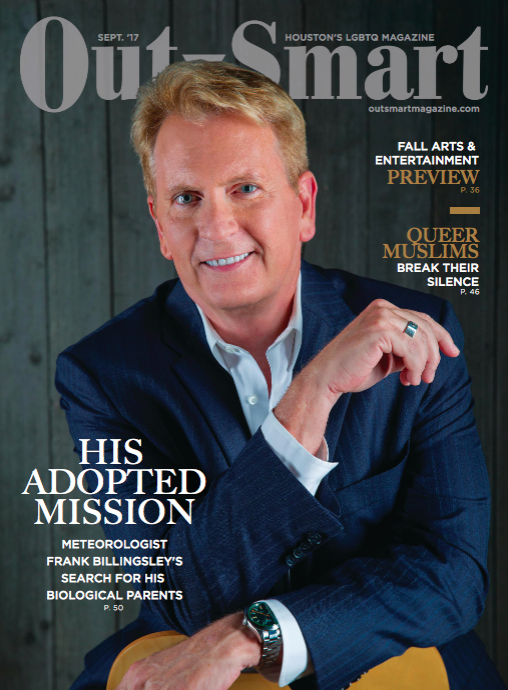 No words can describe the devastation experienced by countless residents throughout Greater Houston in late August. However, it’s our hope that OutSmart’s September issue, which you can read online now, will provide readers with a few reminders about what continues to make this city so special.

For starters, take our remarkable theater scene. This is our annual Arts & Entertainment edition, and D.L. Groover has a lively rundown of highlights from the upcoming fall season.

The theater district was hit hard by Tropical Storm Harvey, so you’ll want to double-check dates and showtimes. But it’s more important than ever to patronize these productions and support the casts, companies, and venues that make them possible.

Speaking of Harvey, what a coincidence that this issue also includes Kim Hogstrom’s cover story about a new book by Frank Billingsley, chief meteorologist at KPRC-TV. Billingsley, who once again helped many of us weather the storm, joins OutSmart for a book-signing at Urban Eats on September 28.

Indeed, the Bayou City is blessed with a ton of LGBTQ talent. For example, check out writer Ryan Leach’s profile of Jim Sikorski, the longtime gay activist who’s been singing the national anthem at Astros games for 37 years. And don’t miss Andrew Edmonson’s piece on Malcolm Daniel, the former ACT UP member and world-renowned scholar who now curates the photography collection at the Museum of Fine Arts, Houston.

Of course, another quality that sets H-Town apart is our tremendous diversity, and writer Josh Inocéncio takes a look at the Iftikhar Community of Texas, a new local group for LGBTQ Muslims. Meanwhile, Andrew Edmonson examines the work of Mickalene Thomas, the “superstar” black lesbian artist who’s bringing an empowering exhibit to Rice University’s Moody Center for the Arts.

Finally, although our September issue was already in production when Harvey hit, OutSmart will devote its October issue to flood-related stories of LGBTQ heroes and survivors. For that reason, we’re postponing our Gayest & Greatest Readers’ Choice Awards until November. If you know of an LGBTQ-related Harvey story you’d like to see featured in October, email [email protected]tMagazine.com.