One hundred years ago, the Hyde Park community in Montrose was on the edge of Houston. That’s where Rev. John T. Gillison developed Grace Lutheran Church in 1922. Church members met for the first two decades on the corner of Westheimer and Waugh—most recently the site of Hay Market restaurant (whose building was formerly the longtime home of the lesbian bar Chances).

In 2016, Grace went through a reorganization and name change, and it’s now known as Kindred. It remains a congregation of the Evangelical Lutheran Church in America (ELCA) and proudly counts those first 94 years in Montrose as an important part of its history.

Now located at the corner of Waugh and Missouri Street, just blocks from their original site, the stone building that Kindred now occupies was built in 1949 when Rev. Nathaniel Kern pastored the growing Lutheran congregation. Church members persevered through the changes that many mainline congregations saw in the last century, having their heyday in the 1950s and 1960s and then regrouping as people moved to the suburbs. Along with those changes at Grace was the transformation of Montrose into the “gayborhood” of Houston.

As religious queer folk started attending Grace, attitudes about homosexuality changed among the membership. Rev. Kris Franke Hill (Grace’s pastor from 1991 to 2000) believes that transformation began when Rev. Harold Deal became the pastor in the late 1970s. He arrived at Grace with typically stereotyped beliefs about queer folk, but his eyes were opened when several members started coming out to him. As his understanding changed, he became more supportive of LGBTQ issues. Every pastor since that time has been a reliable advocate of Houston’s queer community.

Rev. Ashley Dellagiacoma, pastor of Kindred since the name change, tells the story of a woman who visited them a few years ago. She introduced herself as the daughter of Rev. Kern from the 1950s. Rev. Dellagiacoma told her about the LGBTQ outreach work that Kindred was doing in the neighborhood, particularly their work with homeless youth and queer-rights advocacy. “She said her dad would be so happy to hear about the vibrant justice-oriented things we are doing,” Rev. Dellagiacoma recalls. “As organizations grow, you always wonder if who you are is who your elders and ancestors imagined you would become. To hear that affirmation was a beautiful moment.”

American church denominations all have their “code words” to identify their LGBTQ-affirming congregations. ELCA Lutherans refer to “Reconciling in Christ” (or RIC) congregations, which are supported by the national Reconciling Works organization. That program offers resources and guidance to any ELCA congregation that commits to extending a public welcome to the queer community.

Grace became an RIC congregation while Rev. Franke Hill was the pastor, but she is quick to note that the work started with the two pastors who preceded her. When she arrived, there were already several LGBTQ members who were out in the congregation, even though it wasn’t much discussed. It was Karen O’Maila, the music director at the time, who first suggested that Grace should become an RIC congregation, and Rev. Franke Hill agreed it was a good idea. After they carefully approached different groups in the congregation to explain what the RIC designation would mean, voting to approve the designation was not a terribly controversial decision. “Becoming ‘Reconciling in Christ’ was just putting a name on who Grace already was,” Rev. Franke Hill notes. 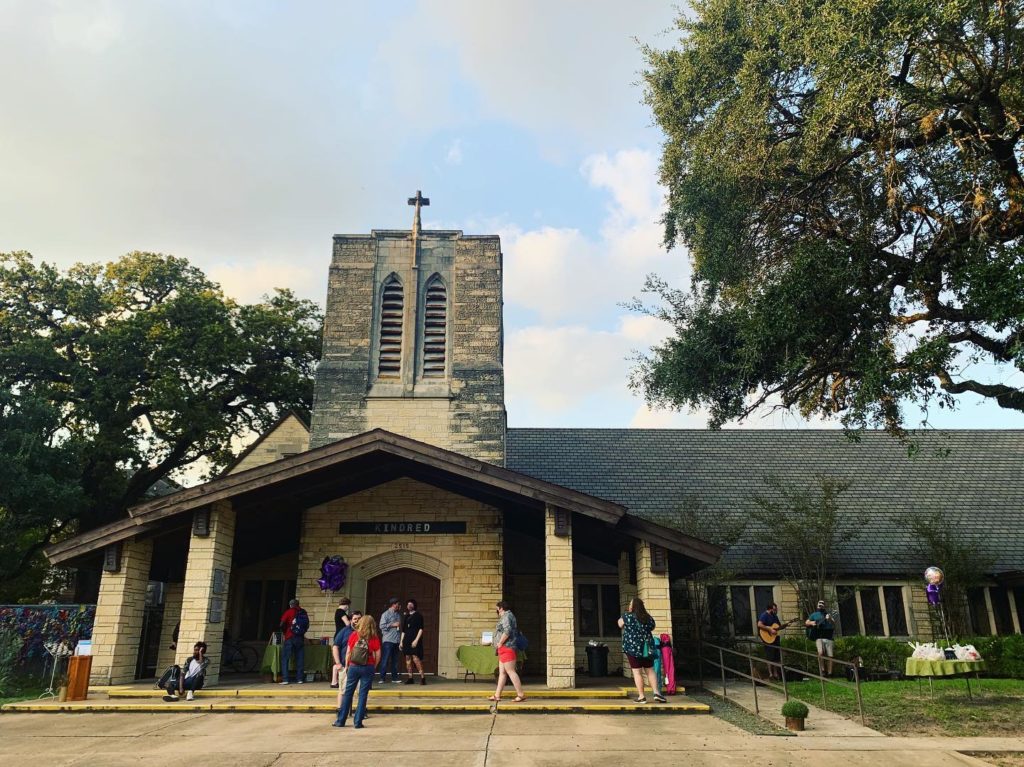 Also under Rev. Franke Hill, Grace held its first same-sex union blessing in the days before same-sex marriages were legal. After a member couple requested it, church leaders again talked to different groups in the congregation to build a consensus that it was the right thing to do. It was also done under the radar of the bishop’s office. “I thought it was better to ask for forgiveness than for permission,” Rev. Franke Hill admits. A month after the wedding, the bishop found out about it and had questions, but he ultimately did not bring any disciplinary action against the congregation.

That spirit of “ecclesiastical disobedience” came to the forefront again when in 2008 Grace called Rev. Lura Groen, who identified as queer. At the time, the ELCA did not allow for the ordination of openly queer pastors, and Grace was in danger of losing its affiliation with the denomination. (The ELCA eventually allowed for the ordination of queer pastors following decisions made at their 2009 Churchwide Assembly.) Rev. Groen remembers that particular moment in this way: “Grace was so bold and so clear that if rules were unjust, they didn’t have to follow them. If the right pastor for them was not a pastor that was acceptable to the ELCA for the particular reason of queerness, then they were still going to call the right pastor.”

Before calling Rev. Groen, the congregation had already started talking about developing a focused ministry that would lead to more direct engagement with their Montrose neighborhood. Barbara Carroll was on the Mission Discernment Team at the time, and the conversation kept circling around the homeless. She felt a particular connection to that outreach work since she had been homeless as a 16-year-old, and had spent time as a resident of Covenant House.

This was the first step in establishing Montrose Grace Place (MGP), an independent nonprofit organization that is still housed at Kindred.

With the arrival of Rev. Groen, the work continued with intentional conversations with community leaders as they tried to bring a tighter focus to their ministry. Both Rev. Groen and Carroll cite a meeting with Eva Thibaudeau, who at the time was with the Coalition for the Homeless. “We asked her if there was a group of people who were falling through the cracks,” Carroll remembers. “She said, ‘As a matter of fact, there is a group; it’s homeless LGBT youth.’”

After finding their focus, however, there was still work to be done. “Then there was a feeling that was so strong that they were ready to throw open the doors and order pizza the next week,” Rev. Groen recalls. “And I was the one who said, Whoa, if we’re going to do this, let’s do it right. Churches do this wrong all the time.” They took another year of study and conversations with neighborhood and community leaders. “I think that has a lot to do with the success of Montrose Grace Place,” Rev. Groen continues. “It meant the neighborhood really felt like we were taking things seriously and we had responded to what we had heard [from them], and they were invited into the process of creating it.”

Kinnon Falk is a current member of Kindred and serves on the MGP board. He talks excitedly about new projects under the MGP banner. In the next few months, they will begin a culinary training program for the youth. “We had a connection to food. Kindred is a dinner church. Grace Place has a connection with the family meals they serve. Montrose is a restaurant-dense neighborhood, so it seems like a good fit,” Falk says.

This program will focus on training with and for higher-end restaurants. The hope is that the work would be seen by the youth as a possible career, and not just a fast-food gig. They will also launch a food trailer and café within Kindred. MGP has received a grant to help fund this new social enterprise. Money will be available for a part-time case manager who will serve the youth by linking them to such things as housing, child care, and health care.

It’s not just youth whose lives are changed by MGP. Carroll says the establishment of MGP redirected her own life. She was working in the banking industry and not feeling it was right for her. One night, after an evening with the MGP kids, she felt a different fulfillment. She eventually quit her job, went back to school, and is now a licensed clinical social worker specializing in work with adolescents and their families.

A Place of Welcome

When Grace became Kindred, it was more than a name change. They restructured their worship by meeting on Sunday evenings rather than in the mornings. They removed all the pews from the nave, and they now gather around tables for dinner as part of their liturgy.

The thing that has remained, however, is the effort to provide a radical welcome to all people.

Falk and his wife came to Grace just before its transition to Kindred, after having been in Houston for a year without finding a church that felt right to them. They loved the social-justice emphasis, especially among the local queer community that they had always felt strongly about. He says, “It’s an incredibly unique community that, to me, feels warm and loving and inviting.”

Carroll echoes the sentiment. “It’s a holy place, it’s a healing place,” she says. “It’s a place that just absolutely enveloped me during a time in my life when I needed it.”

A neighbor to Kindred, known to the congregation as Kris Hyde Park, participates in programs and has sometimes led them. “I love that the homeless are so welcome,” he says. “For the church to just welcome them in is amazing. They get arrested and fined if they take a leak on the street, but no one will open their door so they can use the restroom.”

When asked about the church’s current demographics, Rev. Dellagiacoma says “We’ve got young professionals and folks who just got their housing vouchers and folks who are retired and folks who are drag queens at the local bar.” She laughs and concludes, “It is a great smorgasbord of humanity.”

Kindred will host an online celebration of its 100th anniversary on April 24 at 4:00 p.m. For registration and a link for sharing memories, visit the Facebook event page.

Another in-person neighborhood celebration will take place in the fall.