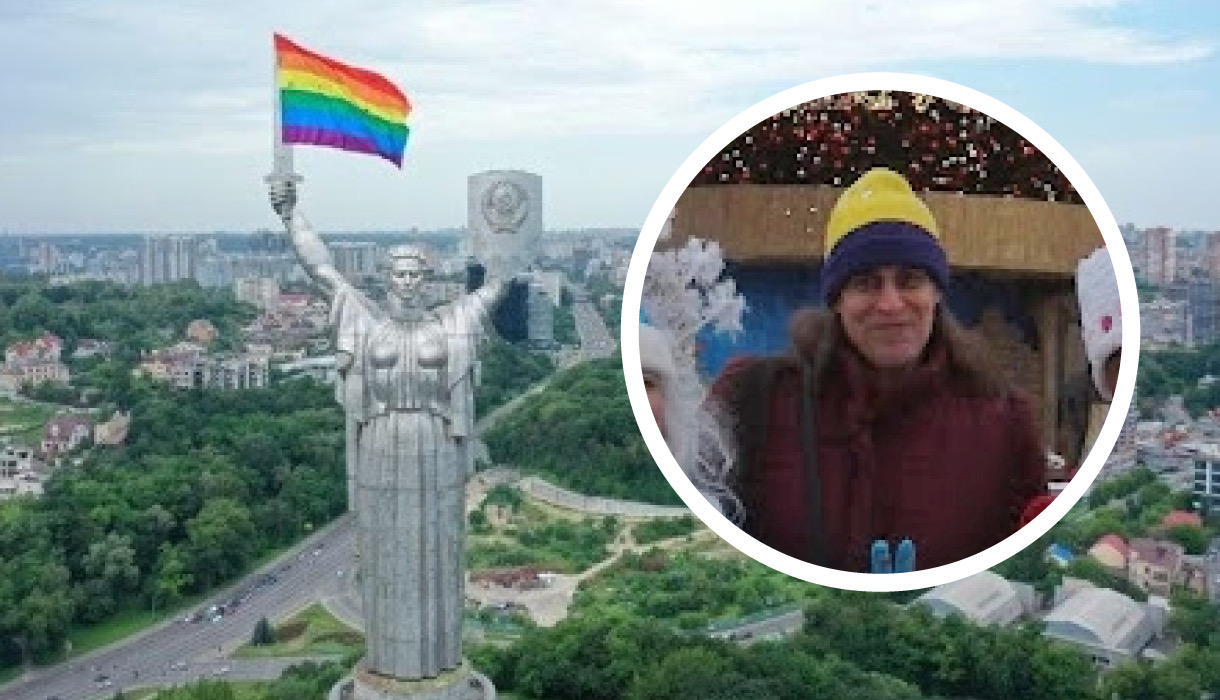 The world is on edge as we collectively watch the brutal Russian invasion of Ukraine intensify by the day. And for Houstonian Hana Pinard, this senseless war is personal.

Pinard has deep roots in Ukraine, and these days she awaits updates from her Ukrainian friend Miroslava, who is a trans woman fighting for her homeland and her freedom on the front lines of the resistance.

Pinard, an out lesbian trans woman who is not Ukrainian, found the country’s culture fascinating from the get-go. “I went down to the Ukrainian church with my mom, when she was still alive, on Easter Sunday around 2010,” she recalls. “They advertised a dinner after Easter Mass, and we tried some Ukrainian food. They were so welcoming, and I thought ‘We gotta come back—you guys are a lot of fun!’”

That brief encounter formed the foundation of Pinard’s love affair with the embattled country. Starting in 2010, Pinard made a number of trips back and forth to Ukraine, typically staying with host families. “I most recently got back from Ukraine on December 26 after being in Odessa and Kyiv. I’m so glad I went, because who knows when I’ll be able to go back.”

Pinard explains that she and Miroslava connected via social media. “We met on Facebook. I moderate a group called ‘LGBT Ukrainians in North America. She joined that group and we found each other. There are about 900 members in the group, and there are no other Facebook groups, to my knowledge, that are like ours.”

Miroslava, who was born in the city of Zaporizhzhia, offers her followers firsthand Facebook updates of the Russian invasion. “It’s as bad as you see on TV. There are daily bombings, and it seems to be happening more now because the Russian infantry has bogged down in Ukraine,” Pinard summarizes from Miroslava’s Facebook conversations. “Ukrainians have been fighting fiercely for their land and cities. The Russians are doing airstrikes and bombing towns to cause misery and demoralize the people. There is footage of old grannies that are out there with their AK-47s defending their apartments against the Russian tanks and making Molotov cocktails.”

Pinard adds that Miroslava is no stranger to combat, having served in the Ukrainian military before. “The last I saw, they got her an AK-47 so she’s armed now. She’s going through training again, but I don’t know where exactly she is posted. [They] probably keep it vague so her whereabouts aren’t known.”

Pinard worries for her friend’s safety and well-being as a trans woman in a predominantly male military. But Miroslava has assured her that the camaraderie in the barracks couldn’t be stronger. “I was worried that she would be harassed because she just completed her [gender affirming] surgery about three or four months ago,” Pinard says.

“The men have been very nice to her,” Pinard continues. “They’re housed in barracks and they all sleep together in the same room in bunks. There’s a guy’s bathroom, and when they realized they didn’t have a female bathroom the male soldiers put a sign up on one of the additional men’s restrooms and made it a women’s bathroom that she has all to herself. Twenty guys have to share a bathroom, and she gets her own. It was so cool to hear about the camaraderie. They’re keeping one another out of harm’s way, and they’re really looking after her.”

Pinard continues to anticipate updates from her friend while going about her day working as a licensed health agent. “There’s no real way to cope correctly, and you have to set your own personal boundaries. I go from being OK to bawling and sobbing,” Pinard admits. “On the first day of the invasion, I took my work lunch hour early because I was told about the evacuation. I saw on TV what the roads to Poland looked like—a wait of 72 hours for many people. They were sitting ducks on the road. It’s so stressful for me. Work keeps my mind off of the war, and I avoid watching the news all day and only check it at night.”

Pinard’s deep connection to Ukraine, its people, and her deep knowledge of their history is what gives her hope and optimism that the country will continue to put up the strongest fight against the Russian invaders. “Throughout their history, Ukrainians have fought for their independence in one way or another,” Pinard says. “Ukraine is changing things in the U.S. and across the world. I’m hopeful [that our deeply divided] red and blue states will continue to come together on more things that we see eye-to-eye on, and identify ourselves with the Ukrainian community. Ukraine is in a big mess right now, but the world is taking note of their courage. They are fierce.”