One of five children, Lee-Sexton was raised in a two-parent home. Her father was a construction worker, and her mother was a nurse. Growing up, she attended church gatherings and sang in the church choir.

She had been living a drug-free life until she ran into what she describes as “the wrong crowd.” They drove fancy cars, wore nice clothes, and freely waved around cash, so she wanted to be a part of their world. “It sounds crazy, but I was nosy. There is no other way to put it,” Lee-Sexton admits.

Before long, she was introduced to and became addicted to cocaine around age 20. She snorted and smoked the drug for the next 11 years until she escaped to Houston and moved in with her sister, a nurse who worked in a methadone clinic. Her sister immediately took Lee-Sexton to that clinic and forced her to take a drug test. After she dropped to the floor, kicking and protesting loudly, her sister shot her a disappointed look—one their mother gave them growing up. “Mama’s not here, and I’m supposed to take care of you. So, get your butt up, we’re going to treatment,” she demanded.

Her sister’s sobering words forced Lee-Sexton back onto her feet, and she began treatment on June 16, 1993. As a reminder of the last day she ever used cocaine, she tattooed the date on her arm—between the words God and Dante, who is her son. “Without God, I cannot stay clean, and without staying clean, I cannot have my family,” she explains.

“In the gym, when you get confidence in one area, it spills over to the other areas, and you become the person you should have been all the time.”

Now a recovering addict of nearly 30 years, Lee-Sexton will be turning 60 in February. “My journey had its highs and lows,” she says. “It’s not what we’ve been through, it’s where we are today. We are not responsible for our disease—our addiction—but we are responsible for our recovery.”

As a fitness trainer, Lee-Sexton shares this lesson with her clients. She accepts them as they are and works to create individual fitness plans that address their physical, mental, and spiritual needs.

“Because I combine my recovery with fitness, my disease of addiction has allowed me to accept people just the way they are, no matter what they’ve been through or where they are at the moment. Some of us are ‘real raggedy,’ as Mom calls it, and it’s OK to not be perfect, to have been through some things, and to still be going through some things,” Lee-Sexton says with a laugh.

She enjoys the power and control that comes with working out. “Exercise became my refuge—my safe place—and it allowed me to really get in tune with my body,” she says.

She decided to get her trainer’s certification around age 45 and created the Women’s Health and Fitness Center in 2013 to help other women experience that same power. The Center offers personal training, group training, boxing, step class, an exercise program for children called Kid Fit, Bible study, a psychotherapist, a massage therapist, a lash bar, and other services tailored to a female clientele.

She also wanted to give women a safe place to exercise, because coed gyms can be dangerous for women. “No offense to larger co-ed gyms, but women don’t get an opportunity to relax [on their own], without spouses or children,” she explains. “It was important that I had this place for us.”

Lee-Sexton had once trained a victim of domestic violence who gained weight in order to cope with the abuse she suffered at home. The gym gave her the opportunity to work through her trauma and get to where she wanted to be, mentally and physically.

An LGBTQ ally, Lee-Sexton has also been empowering clients at Legacy Community Health for the last decade as head of the clinic’s fitness program. 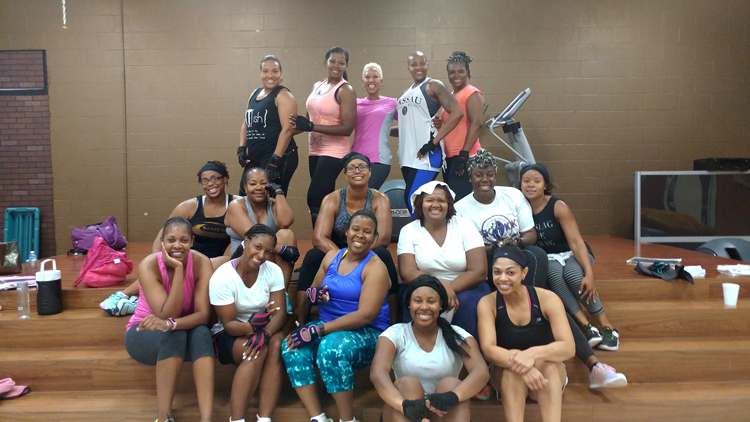 “I’m so overprotective of my clients and the people I come across, and I think that’s because when you really look at the disease of addiction and look at the LGBTQ community, we can be discriminated against,” she says. “You can’t help but come together in one accord.”

At Legacy, Lee-Sexton once trained a 300-pound patient who had suffered from strokes and other health challenges. Lee-Sexton tailored a fitness program for the patient that included weight-lifting exercises like curls, triceps, and back workouts. With the Legacy dietician’s help, the patient was able to lose around 110 pounds.

Throughout the years, Lee-Sexton has had countless moving moments with her Legacy clients. “Legacy allows me to be who I am without explanation, definition, or apology, and that allows me to have an amazing relationship with my patients,” she says. “A patient will say, ‘I’m here for another appointment, but I stopped in to see you.’ You can’t put a price on that.”

Lee-Sexton has big plans for the new year. The Women’s Health and Fitness Center will be opening its second location in 2022, and she predicts continued growth in the years ahead.

She’s also excited about next month’s release of her second book, Sixty, Sexy, & Sane—Face It with Fe Fe’s 30 Day Feism. It’s based on the words of encouragement she shares with clients, including “Get your butt off my floor!” (which means people should quit dragging through life, take initiative, and stop letting other people weigh them down) and “Next level, next level!”

“I always believe everybody has a ‘next level’—if you’re willing to get out of the box long enough to get to that next level.”

Lee-Sexton has a few tips for people looking to be healthier and fitter in 2022. She encourages people to be honest about what they’re willing to do, because having unrealistic goals will stop them from making progress. People should also focus on their training. “I tell people all the time: don’t look to the left, don’t look to the right, don’t compare your body to anybody else,” she says. “That’s the best way to get messed up.”

She invites people to join her at the Women’s Health and Fitness Center or at Legacy if they need a supportive trainer and want to improve all areas of their life. “In the gym, when you get confidence in one area, it spills over to the other areas, and you become the person you should have been all the time.”