Coming out as LGBTQ can be a stressful and lonely experience for young people who can’t lean on family members for support. Brandon Montano, a 25-year-old physical-education teacher who coaches elementary students in Houston, discovered that he could be his authentic gay self, loudly and proudly, thanks in large part to his grandmother, Ruth Steinfeld. She is a Holocaust survivor, public speaker, author, and retired hairdresser whose life experiences set her on a path of practicing forgiveness and encouraging others—like Montano—to do the same.

“She is the strongest woman I know. I admire her for always pushing me to do more than I’m doing now, and seeing my full potential.”

The close bond between this grandson-grandmother duo perfectly demonstrates the power of unconditional love and acceptance.

Montano’s voice is steady and fearless as he recalls his coming-out journey. “When I was little, I always knew that I felt different than other boys. I remember having a crush on a friend in preschool, but I didn’t know what that meant at the time. But by the age of 16, I realized that I was emotionally and physically attracted to men. I’ve never been a person to hide or not express myself. I’m creative and artistic, and I’m not afraid to be who I am. I’m super-proud to be openly gay and a member of the LGBT community.”

Steinfeld, who Montano affectionately refers to as “Mimi,” had a much different upbringing—a narrative pulled straight from the history books. “My life has been one of different experiences that people in America are lucky to not know,” she explains. Steinfeld was a seven-year-old when her family was taken by the Nazis to Gurs, a French internment camp. “I lost my whole family in World War II. My life was about never talking about the past. I never told my children about my life in the concentration camp, and then being hidden so I could survive.” 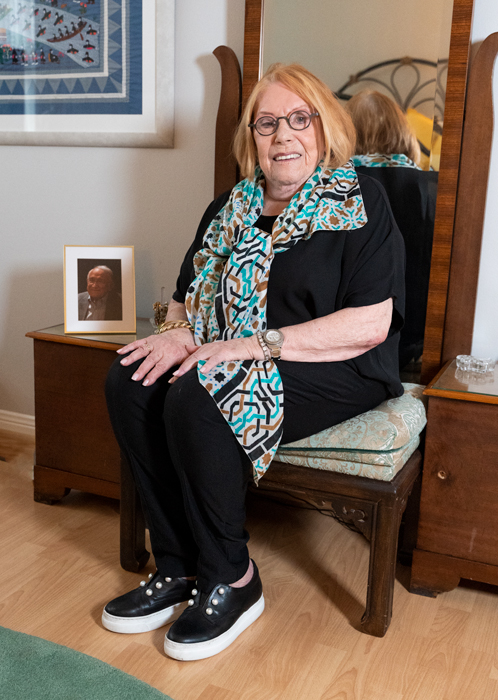 Steinfeld jokes that at her age (she’s sharp and witty at 87 years young), memories are hazier than they once were. Nevertheless, she vividly recalls the moment she was rescued from the camp as a child, and how her mother’s selfless choice to save her and her sister’s lives has always resonated with her. “A French Jewish humanitarian organization told my mother that if she would let them [take my sister and me], we would have a greater chance to survive. [They promised] to do everything they could to make sure we did,” she recalls. “My mother must have been some kind of woman to do that. I remember getting on a bus and waving goodbye to her. I had been screaming and crying, saying that I would be good and do whatever she wanted me to do, but she insisted I get on the bus. That’s the last time I saw my mother. We went into orphanages and foster homes, and eventually went to live with a French family.”

In 1981, Steinfeld learned more information about her parents and their ultimate fates in the French internment camps. “I looked at how lucky I was to have a mother who gave us away so that we could live. Because of that, I’ve been very open about talking about my past,” she explains. “When I saw that so many millions of children had been murdered [during the Holocaust], I made a solemn commitment to start speaking about my experience, and speaking for those millions that didn’t have a chance. I was very shy, but I had that commitment so I started doing that.” Steinfeld worked as a public speaker, traveling the country and internationally to share her story. She also penned a memoir titled Forgive But Never Forget, which was released earlier this year.

Steinfeld’s career as a hairdresser allowed her to better connect with her grandson. “She was a hairdresser for many years, so she’s always been surrounded by members of the LGBT community,” Montano explains.

Her strong relationships with members of the gay community gave Steinfeld a clear outlook on LGBTQ rights. “My best friends are gay,” she explains. “I always tell Brandon about one particular couple that has been together for 40 years. I told Brandon it’s possible that we can all have good relationships. How many heterosexual people get divorces, you know?”

On the topic of love, Steinfeld shares, “My husband and I were married for 60 years, and there were always issues we had to work through. I told Brandon that being gay is difficult, especially when you first come out. I told him, ‘I was engaged three times before I got married, so don’t worry about it,’” she admits with gut-busting laughter.

Montano knows he is lucky to have a grandma who is so open and loving. “When I told her I was gay, she was really happy for me. I was in a relationship, and she was super-supportive and always wanted to know my friends and to get to know more about me. She’s always been a huge support,” he says of his Mimi. “I’ve always felt comfortable telling her things. We’ve had such a great relationship. She’s taught me so much about forgiveness, especially being that she is a Holocaust survivor. I thank her from the bottom of my heart for teaching me about so many aspects of life, like acceptance, being who you are, and expressing your individuality.”

The life lessons that have trickled down from Steinfeld’s experiences during World War II are taking root through her family members. As Brandon puts it, those lessons have made him who he is today. “Because of my grandma, I’ve learned how to not judge others. She taught me not to judge others based on skin color, body type, or religion. I’m half Mexican and Jewish, and I’m super-proud to tell others I’m Mexican, Jewish, Caucasian, and gay. It’s who I am today, and it’s part of me.” 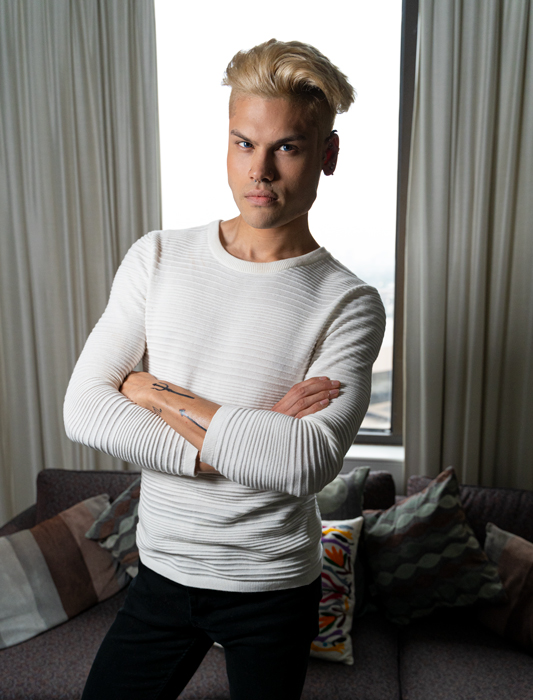 Steinfeld concurs as she brags about her grandson. “He’s a beautiful young man. He is so dedicated to what he does. His sexuality was none of my concern, and if he is happy being who he is, then I’m happy, too,” she explains. “He’s a wonderful young man, he really is. I admire him.”

Montano and Steinfeld’s bond is one rooted in love, acceptance, and mutual admiration. “She is the strongest woman I know today,” Montano says. “She had to work her ass off to get to where she is today. Learning English, building a home, raising a family, the experience of losing her husband—she has overcome so many battles. A lot of my problems now seem pretty minor. I admire her for always pushing me to do more than I’m doing now, and seeing my full potential.”

Steinfeld gets the last word when she describes Montano as “genuinely, truly good.” It’s no wonder Montano is as brave, courageous, strong, gentle, and driven as he is. His Mimi is a force in his life, and a force of nature in the lives of many people she has touched. After so much reflecting on her life, she concludes with a chuckle: “I’m an old lady, and I have no idea how I’ve survived all of this. Brandon has always been there for me. When I travel to give my talks all over the world, he’s always supported me. After I wrote my book, I asked him if he had read it yet. He said, ‘Mimi, I know your story!’”