Memorial services for the late transgender journalist and activist Monica Roberts will take place in person and virtually this weekend. The image below shares the dates and times of these services: 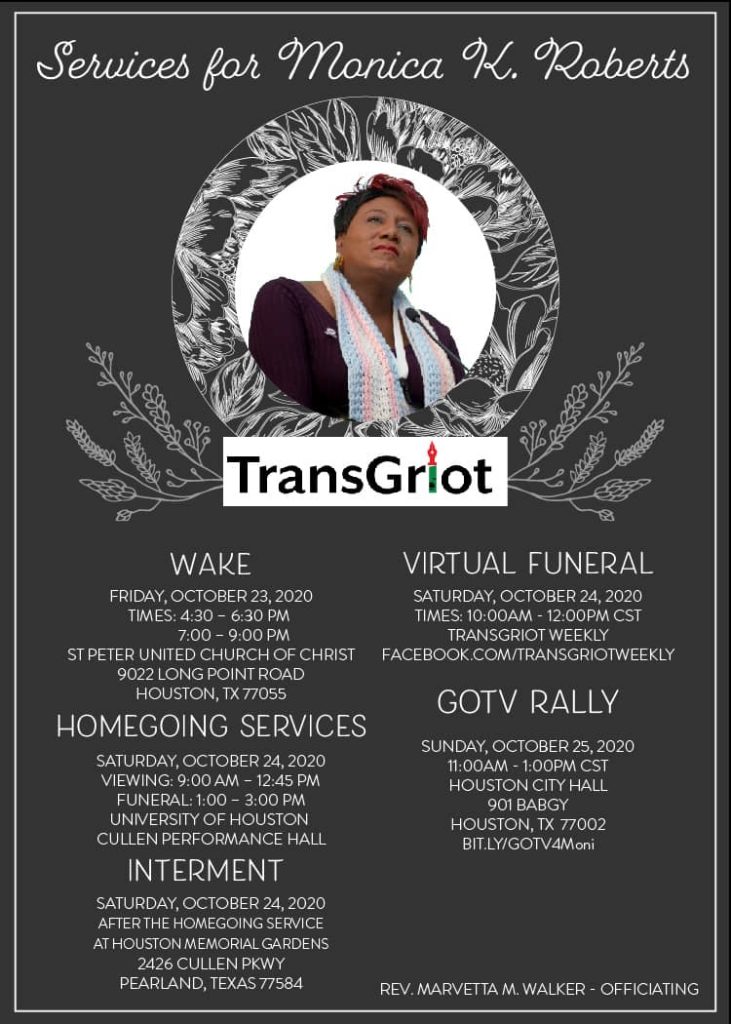 Watters shared the news via Facebook after several local news outlets, including ABC13, the Houston Chronicle, and Click 2 Houston, reported that Roberts was the victim of an October 5 hit and run incident. OutSmart accidentally shared one of these news stories on social media.

“For clarity, Monica Roberts died of natural causes on Tuesday morning,” Watters posted on Facebook. “I’ll go live soon, but please for now just love on yourselves and each other! Again, she was not a hit and run victim #TransGriot.”

Witnesses found Roberts lying in a Southwest Houston apartment complex parking lot, Houston Police Department (HPD) reported. There were no obvious signs of trauma to Roberts, however, at the time, evidence at the scene indicated she may have been struck by a vehicle.

Further investigation and an autopsy conducted by the Harris County Institute of Forensic Sciences determined Roberts suffered a medical emergency and was not the victim of a hit and run crash.

Although the media correctly identified Roberts as a woman, sharing inaccurate information, including the misgendering of victims, is common by law enforcement and local media outlets who report on the deaths of trans people, according to GLAAD.

The false narrative of Roberts’ death by violence was started by ABC13, whose reporters relied on vague information provided by HPD rather than a firsthand account from someone close to Roberts. Ironically, Roberts and Watters had been using Roberts’ award-winning blog Transgriot to provide accurate information about transgender victims of fatal violence.

In another Facebook post, Watters said that she was unable to share the cause of Roberts’ death sooner because it had not been determined by the autopsy until the morning of October 9. Watters also said she wanted Roberts’ mother to be the first person to know.

Watters said she is working on Roberts’ memorial arrangements. Folks can donate to these arrangements through the Black Transwomen Inc. at tinyurl.com/y35378sz.

Roberts, 58, was the founder and editor of the GLAAD award-winning blog Transgriot, a Houston-based website launched in 2008 to report local and national transgender news. She had also been an OutSmart columnist for the past two years.

Roberts’ best friend and fellow trans activist, Dee Dee Watters, shared the news of her passing on Facebook. “Monica Roberts was called home to glory on Monday,” Watters wrote. “I’ll provide details soon! Just please check on each other and please don’t ask me what happened!”

Many LGBTQ Texas leaders are mourning Roberts’ passing by using social media to share their admiration for the activist.

“I’m completely shattered to hear the news that Monica Roberts is no longer with us. I do not even have the words to say how much of an inspiration she has been to me with her passion, knowledge, and fierceness in our struggle,” wrote trans model and volunteer Jessica Zyrie. “I am so grateful to have had you in my life these past few years.”

Emmett Schelling, the executive director of the Transgender Education Network of Texas, posted: “I cannot find the words right now. The mark Monica Roberts has left on this world will live on in her legacy. Take care of one another because this is all so temporary. Rest in Power.”

“It’s impossible to even voice what a loss every LGBTQ+ person has suffered with the passing of our friend Monica Roberts,” wrote Transform Houston’s Brad Pritchett. “I can’t even process how we fight the fights ahead without her strength and her voice and her unshakable drive to lift up and speak out for the people who were voiceless.”

Roberts’ legacy is also being recognized by both local and national LGBTQ organizations.

“[We’re] devastated to learn of the death of the trailblazing transgender activist Monica Roberts,” Equality Texas CEO Ricardo Martinez said in a statement. “Monica was a part of our family, our dear friend, and we have fought side by side at the Texas Capitol for two decades. Our hearts break tonight at her loss.”

“For decades, Monica has been a fierce leader bringing light to the injustice transgender people face, especially Black transgender women. She leaves behind a strong and vital legacy—one that every LGBTQ person and ally should work to honor and advance. Rest in power, Monica, and thank you,” the Human Rights Campaign wrote.

OutSmart will post more information on Monica Roberts’ death when it becomes available. A full story on her life will appear in the November 2020 issue of OutSmart.