Even in the best of times, a community food bank is an important part of big-city life. And during a crisis such as the COVID-19 pandemic, it has become a lifeline for thousands of additional people who are suddenly without an income.  The Houston Food Bank (HFB) was established in 1982, and in the past three decades has grown to become the largest food bank in the country, based on distribution. In 2011, HFB moved into its current home, a large warehouse facility located east of downtown on I-10.

The food that HFB distributes throughout the region comes from various sources: surplus crops grown by farmers and procured through the U.S. Department of Agriculture, grocery stores and wholesalers that give away thousands of pounds of surplus food, and staples purchased with funds donated by corporate sponsors through the HFB purchasing department, which strives to get the best value possible.

In addition to non-perishable canned goods, HFB puts a high priority on distributing nutritious food such as fresh produce, dairy products, meats, frozen products, canned fruits and vegetables, and fruit juice. Last year, more than 800,000 people were fed through the efforts of HFB.

The HFB warehouse usually has 300 employees working to receive truckloads full of food and assemble boxes for distribution. Although the Food Bank is limiting the warehouse staff to 100 people during the pandemic, they have been able to increase their normal output by 50 percent to meet the unprecedented demand.

Eligibility for HFB food assistance is typically determined by the city’s individual food pantries, but during this crisis they are distributing food without the usual data-collection process. HFB has also stepped in to help with the distribution of food to families with children in school. While school lunches are part of a national program, HFB feels that during the pandemic, families with children at home also need grocery supplies.

The biggest change at HFB during the pandemic is their new direct-delivery distribution method. Using a drive-through model to limit exposure, all HFB staff members wear face masks as they ask drivers to pop open their car trunks so they can place food boxes inside without additional handling.

To meet the growing demand, HFB now stages drive-through food pickups at two satellite distribution centers on Wednesdays and Saturdays. They can serve up to 5,000 vehicles per day at each center.

For people who are homebound without cars, an HFB delivery system is now in place. Volunteer drivers leave food boxes at clients’ doorsteps and then call to let clients know that the food is waiting for them outside.

Houston’s LGBTQ community and its allies are providing vital support to the HFB as it mobilizes to serve those in need. Some of these folks chatted with OutSmart about their work and the toll of the pandemic. 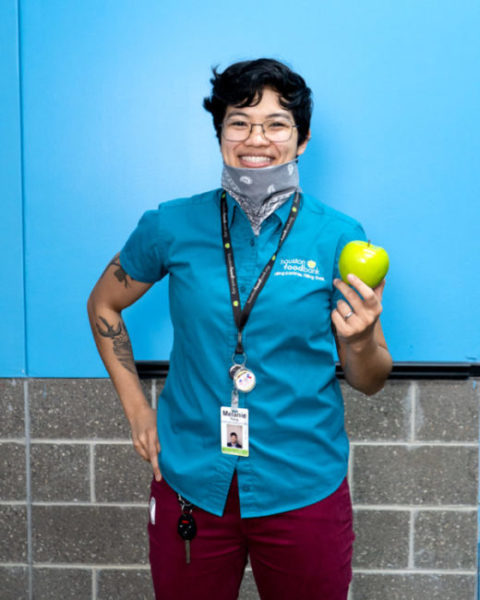 Melanie Pang, a queer Asian-American woman who lives in Third Ward, has been with HFB since 2018. Her job is to help educate elected officials about the needs of the Food Bank’s clients. City Council members and Harris County commissioners work with Pang to help eliminate the roadblocks to providing food assistance for those in need throughout the region. She also helps build coalitions with other community organizations.

Pang says that the COVID-19 crisis has generated a much greater demand for food, largely because so many people have lost their jobs. “The pandemic is just making it more obvious where the social problems lie, and how many people exist in a vulnerable spot,” she notes, adding that the average person in Harris County has no more than $400 in savings. Looking ahead to better times, Pang hopes that people will remember the large number of communities throughout the region that we now realize are very fragile. 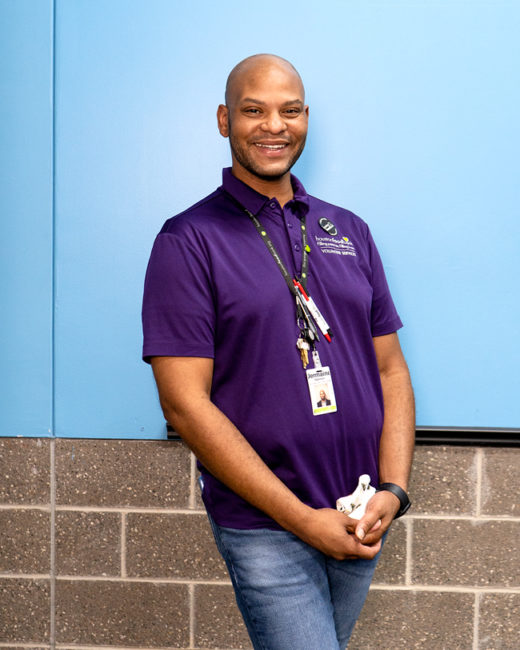 Jermaine Harmon, an African-American gay man from Jersey Village, has been with the HFB since the fall of 2019. Harmon has the huge task of coordinating the tens of thousands of volunteers who work at the central warehouse. He is responsible for recruiting, training, and engaging the volunteers, as well as ensuring safe working conditions for everyone during the pandemic. Although volunteer involvement dipped at the outset of the crisis, Harmon says that was only temporary. “Our response to the virus has made people feel safe, and more people are volunteering now.”

Harmon, who is engaged to be married, says he wanted to work at HFB because he is a giver by nature. “I told my fiancé what I wanted to do, and he agreed that this was very much aligned with my desire to be a good global citizen.”

Lisa Middlebrook has been with HFB for nearly five years, and her wife, Melinda Middlebrook, has been an HFB volunteer for 12 years, working to pack food items into the thousands of boxes that go to clients. Melinda is also the manager for Curvii Addiction, a plus-size women’s clothing and accessories line. For the past seven years, other women from Curvii Addiction have volunteered as a group to work in the warehouse with the African-American lesbian couple.

Lisa works with quality assurance, making sure that the food donated to HFB is not spoiled or moldy. She also checks the temperature of refrigerated donations on the loading docks. Because the number of employees working in the warehouse must now be limited, she is only working part-time. “I’m still being paid my regular salary, so I feel very blessed and grateful,” she says. Lisa was attracted to HFB because they provide food for LGBTQ seniors and kids—two groups that are especially important to her. “It’s all about helping people. My wife and I are both people-oriented.”

Melinda says that she is not currently working at the warehouse during the pandemic, but she does pick up donations from her 12 employees and drive them to the warehouse. Her employees help HFB by buying extra food items when they shop for groceries. Melinda likes volunteering with HFB because she has often encountered customers whose children do not have enough to eat, and she has helped them get signed up to receive food boxes. Helping others makes her feel “on top of the world,” she says. “If I’m blessed every day, let me bless someone else.” 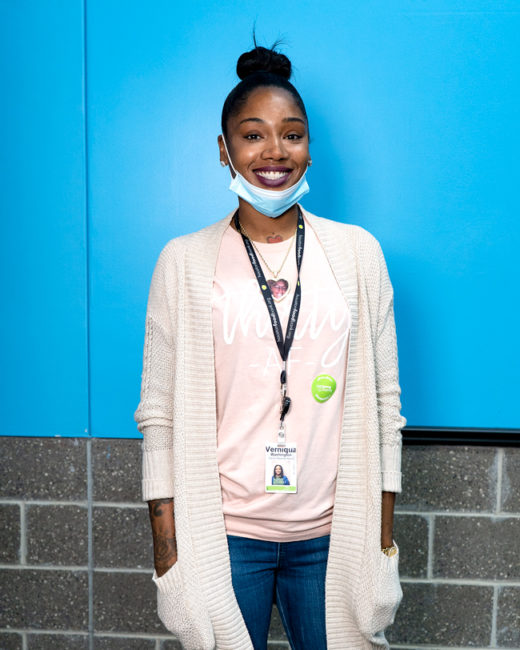 Verniqua Washington, an African-American lesbian woman who lives in Fifth Ward, began volunteering at HFB two years ago, and then became a full-time staff member. She has been working in the Food Bank’s on-site food pantry where clients are invited to shop once a month for 20 minutes. Although the pantry is currently closed to the public during the pandemic, the space is now being utilized to prepare bags and boxes of groceries for delivery to those who are homebound.

Washington says she enjoys working at HFB because of the team environment, and because she has seen the impact it has on the greater community. “People are incredibly grateful—especially our veterans. They tell us that they don’t know how they would survive without us.” 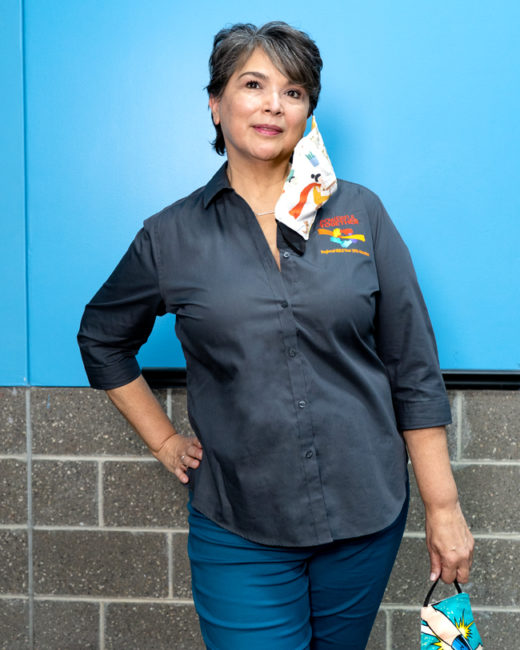 Marie Arcos, a longtime LGBTQ ally, says that the YMCA of Greater Houston has been distributing food from HFB to some of the city’s most vulnerable communities, even while Houston’s YMCA facilities are closed due to the COVID-19 crisis.

The CEOs of both organizations brainstormed about how they could work together to meet the growing need for food in Houston. Twenty-five YMCA facilities are now used as food-distribution locations, and furloughed YMCA employees have been brought in to staff the effort.

Every morning at 8 a.m., Monday through Saturday, HFB trucks roll up to the YMCA parking lots with 10 to 20 pallets of produce. Each pallet has about 1,000 pounds of fruits and vegetables that the staff sorts and bags. Distribution begins at 11 a.m., but cars begin to line up as early as 6 a.m. The staff conducts a minimal registration of each car, and a tag showing the number of people in the family is put on the dashboard. Drivers pop their trunks at the food distribution area, and bags are placed directly in them.

Houston police officers and Harris County sheriffs monitor the lines of cars, keeping intersections from getting congested and keeping the flow moving. In some areas, the food is delivered to nearby school-district stadium parking lots where traffic can be more easily controlled. Every day, 5,000 people are helped.

Arcos praises the furloughed YMCA employees who are now distributing food. “These people are working in temporary jobs, doing things that they do not usually do, but they’ve learned how to do this as their new daily work. It’s hard to see families [in need], but it keeps us moving forward.”

Additionally, the YMCA has been able to provide skilled staff to the Food Bank, saving them from the normal vetting process. “I’m grateful to be in a position where we can leverage strong partner relationships to serve others,” Arcos says. 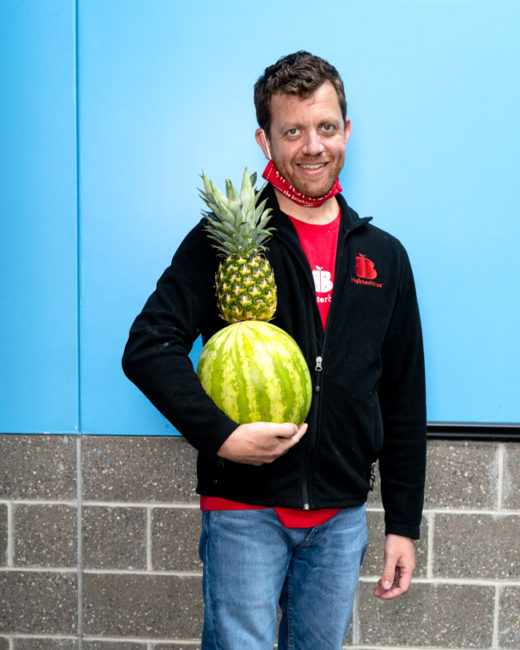 Mike Pomeroy, a gay man who lives on Houston’s near-north side, has been with Brighter Bites since its inception in 2012, when HFB became a partner. “We provide produce for families in lower-income school districts,” Pomeroy says. “The Houston Food Bank brings in a lot of the produce [that we distribute].”

Before the pandemic, HFB produce pallets were delivered to specific local schools. Brighter Bites then coordinated the volunteer efforts of parents to bag and distribute the food. At various times throughout the school year, parents who picked up their children after school would receive 20 pounds of the bagged produce.

The Food Bank produce pallets are currently being delivered to nine YMCA sites, each of which can provide bagged produce for 800 families twice a week. Brighter Bites staff members are working with furloughed YMCA employees to handle those neighborhood distributions. Brighter Bites clients who would normally be served through their local schools that have closed can now receive their produce at a YMCA site.

Brighter Bites has also partnered with H-E-B grocery stores to mail $25 H-E-B vouchers to Brighter Bites clients. The vouchers can be used to purchase produce at any H-E-B location.

“It’s extremely gratifying to be able to help with the current need,” Pomeroy says, “and yet it’s heartbreaking to witness that need.”

For more information about the Houston Food Bank, visit houstonfoodbank.org.