UPDATE NO. 4: The Houston GLBT Political Caucus issued a statement Saturday, July 21 responding to the controversy. Read the statement here.

UPDATE NO. 2: The Houston Area Pastor Council issued a second anti-LGBTQ email in as many days on Friday afternoon, July 20, this time attacking Mayor Sylvester Turner for appearing at Pride.

Although the Pastor Council has always been vocal, the group appears to be emboldened by an anti-LGBTQ political climate fostered by President Donald Trump. The attack on Turner could also be viewed as an early salvo in 2019 municipal elections, with the mayor expected to seek a second term.

“Houston Mayor Turner is quietly following the steps of his predecessor and radical LGBTQ activist Annise Parker by personally promoting the agenda to tear down historic Judeo-Christian based (SIC) sexual morality, marriage and male-female distinctions, per his enthusiastic participation in the 2018 Houston LGBTQ Pride Parade,” the Pastor Council wrote.

Turner was on a trade mission to South America, and couldn’t immediately be reached for comment.

“Unfortunately, Houston Police Chief Art Aceveda [SIC], brought to Houston from Austin and a California product, is now doing the same via decorating an HPD cruiser in rainbow as he did in Austin, followed by uniformed HPD officers carrying a banner proclaiming, ‘Houston’s Finest – Out and Proud,'”  the Pastor Council wrote. “While HPD officers and vehicles have been in previous parades, the sheer number was more than prior years.”

The group added that the Pride parade was “overflowing with the gender-confused,” and that “sexual deviancy is of course the central theme of the LGBTQ movement.”

Chief Acevedo responded to the Pastor Council’s email with a message for the group’s executive director Dave Welch.

“You need to study history, and not show your ignorance by not understanding the history of the Pride movement and why it’s the Pride movement, which was the actions of NYPD toward that community and the riots that resulted—the police misconduct that gave rise to the Stonewall riots,” Acevedo told OutSmart. “Our Police Department is proud to serve in the most diverse city, and to be a Police Department that actually believes in inclusion and believes in creating a safe space for everyone.”

Based on the Pastor Council’s description of the Pride parade, as well as photos included in the group’s email, it appeared that a member of the group had attended the event.

Hotze, the founder of Conservative Republicans of Texas (CRT), called on his supporters to contact Houston City Council members and demand that they put an end to Drag Queen Storytime. CRT has been identified as an anti-LGBTQ hate group by the Southern Poverty Law Center.

“I believe that we need to teach our children strong, Biblical moral values. Wouldn’t you agree?” Hotze wrote in an online petition. “This program has been developed by the LGBTQ political movement with the intention of indoctrinating children into their perverted lifestyle. The drag queen said that he wanted to ‘break the stigma of drag and queer culture with kids.’

“The purpose is, of course, to normalize this perverted behavior, so that these children can be more easily recruited into the LGBTQ lifestyle,” Hotze added. “Exposing children to this bizarre sexual behavior is a form of pedophilia.”

Blackberri, who started Drag Queen Storytime last year, and hosted the event at the Houston Public Library in the Heights last week, said he’s not worried what others think about the event.

“I do it for me and the kids, not for attention,” said Blackberri, aka Darius Vallier. “I strive for a better tomorrow where hate and ignorance is overshadowed by love and acceptance. I didn’t even know the news was going to be there, so I am happy that accepting people now know about the programs. If anyone thinks that a drag queen taking the time out of their day to read to children and make them smile is a problem, they are more than welcome to volunteer their time like I did and read to children themselves.” 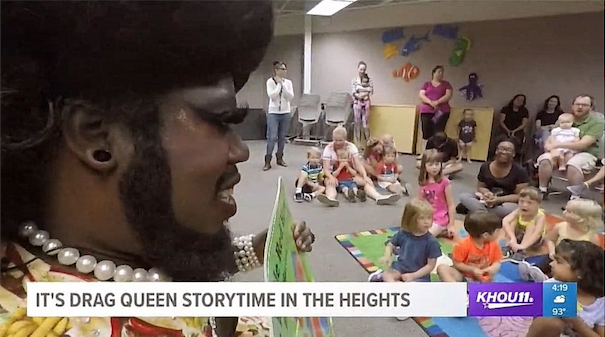 The Pastor Council email calls attention to a KHOU-TV story about a July 9 installment of Drag Queen Storytime at the Heights Branch of the Houston Public Library.

“TXPC NOTE: Pastors and responsible parents, please make sure to click on the top image and watch the full news story – it is truly unbelievable,” the Pastor Council wrote above the KHOU story in its email.

The Pastor Council also underlined and highlighted in red this sentence from the KHOU story: “The story time was geared towards children between 18 months old and 10 years old. (emphasis added).”

The Pastor Council, led by Dave Welch, played a major role in the 2015 campaign to repeal the Houston Equal Rights Ordinance (HERO), which prohibited discrimination against LGBTQ people. The anti-HERO campaign was built around the fear-mongering lie that transgender nondiscrimination protections would lead to men preying on young girls in public restrooms.