“When I began taking photos in 1989, I never expected my photos to become such a valuable community [history archive]. I just loved taking photos, and that love and passion sort of took over my life,” DeHart admits. “I have never taken photos for myself; it has always been for others. It is the people that motivate me to do what I do. My greatest desire is that people see in the photos the passion with which I take them.”

Sara Fernandez, along with Houston historian JD Doyle and graphic designer Kirk Baxter, form the team that’s responsible for curating The Banner Project. DeHart is also a contributor, in addition to now becoming a banner subject. Together, this tireless team provides Houston’s LGBTQ community with something unique as well as educational. Houston has some of the richest (and probably most underrated) queer history in the country. At the start of the modern-day LGBTQ civil-rights movement, Houston was considered one of the nation’s few hubs of LGBTQ life. It continues to trailblaze, and The Banner Project captures that.

“I saw a couple of exhibits in New York and was impressed with the visual displays,” Fernandez explains. “I wanted to have something like that for Houston. When the Creating Change Conference announced it would be in Houston [in 2014] I saw the perfect opportunity to create a display of Houston LGBT history. I was inspired by [a Rice University history archive called] the Houston Area Rainbow Collective History, and the passion for history that several members of that project had. Many people participated in creating the initial display. It was a massive project for our graphic designer, Kirk Baxter, and done in six weeks’ time.”

“Houston’s GLBT history is incredibly unique,” notes Baxter, “and the city was instrumental in helping the movement progress nationwide. There are other history projects throughout the country, but I don’t believe others use the banner concept. I felt an obligation to give back to the community and those who had blazed a trail before me.” 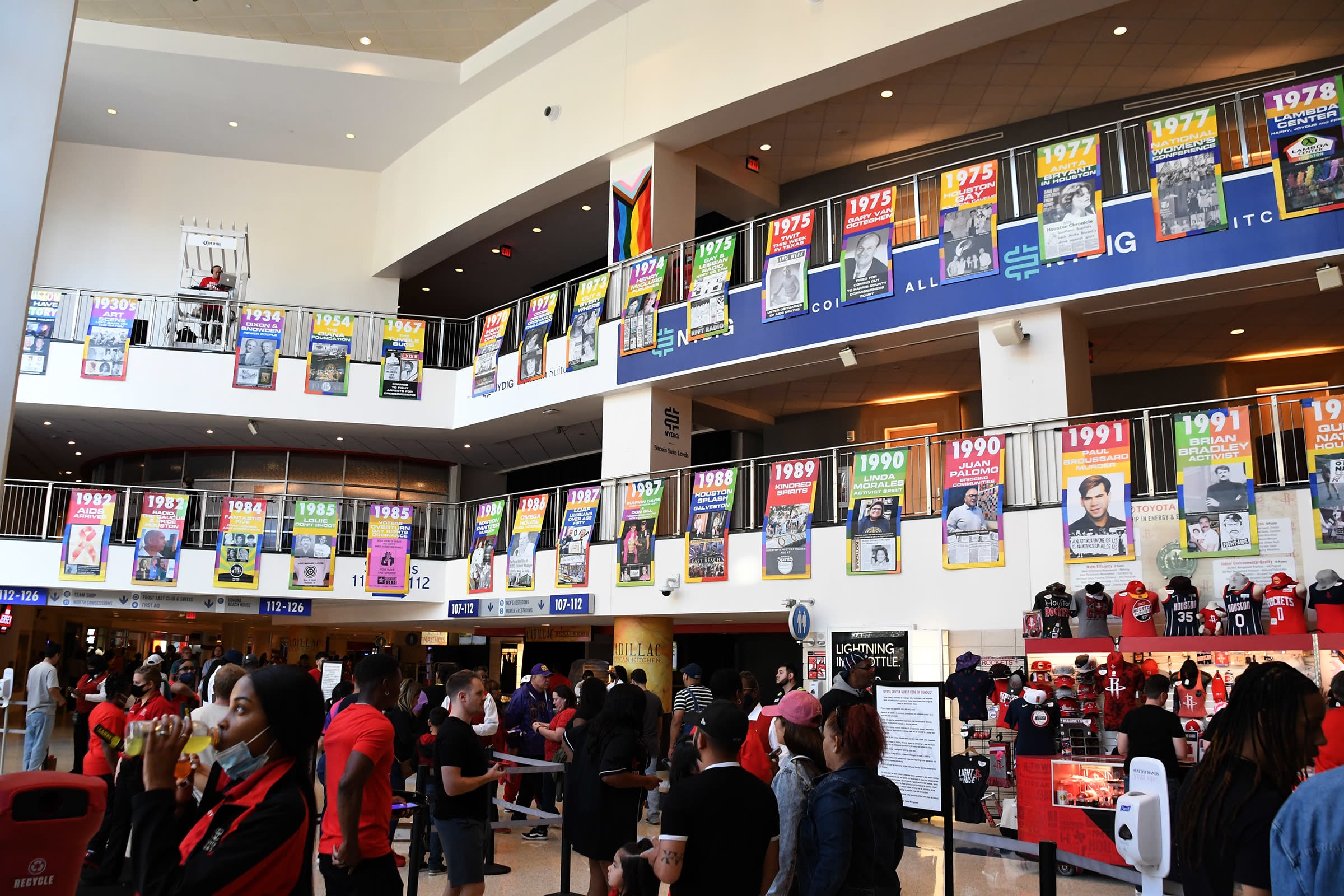 Deciding on the subject matter and design of a banner is typically not a quick process, according to Doyle. “Generally, Sara and I come up with the ideas and it may take a while for the final banner to come to be—often a couple of years. We discuss the worthiness of the subject and how it fits into the entire project, with an extra [emphasis on depicting Houston’s] diversity.”

DeHart and Bagneris are obvious choices for the new banners. Bageneris is responsible for organizing the first Houston Pride parade in the late ’70s. He now resides primarily in New Orleans, but returns to Houston annually for the June parades.

“I want to once again thank my adopted hometown of Houston for honoring my work 43 years ago—and in doing so, honoring the hundreds of volunteers who supported my vision for the Pride parade, Pride Week, and the Gay and Lesbian Political Caucus,” says Bagneris.

DeHart still lives near Greenway Plaza and is well known for always showing up wherever the LGBTQ action is. He started the Dalton DeHart Photographic Foundation with the goal of preserving Houston’s LGBTQ history in photographs for future generations.

“The Foundation was formed in 2015 to preserve LGBTQ history and provide people with the ability to see the photos and download them. Thanks to donations from individuals and foundations, the digitizing project is making it possible to view online more than 300,000 images that I captured on film before I began using digital cameras,” says DeHart.

Most of the Houston history banners can be viewed online at HoustonWeHaveHistory.com. but the LGBT Chamber event will provide a unique opportunity to see the entire series set up on display. And donations for the development of future banners are always welcome.

“It is a pop-up exhibit of LGBT history from the 1930s until 2010, showcasing our people, events, and organizations,” Doyle notes. “I do not know what other cities have. The Greater Houston LGBT Chamber has been a huge help in getting the word out this year, but donations are always welcome to allow for ongoing banner production and supplies.”