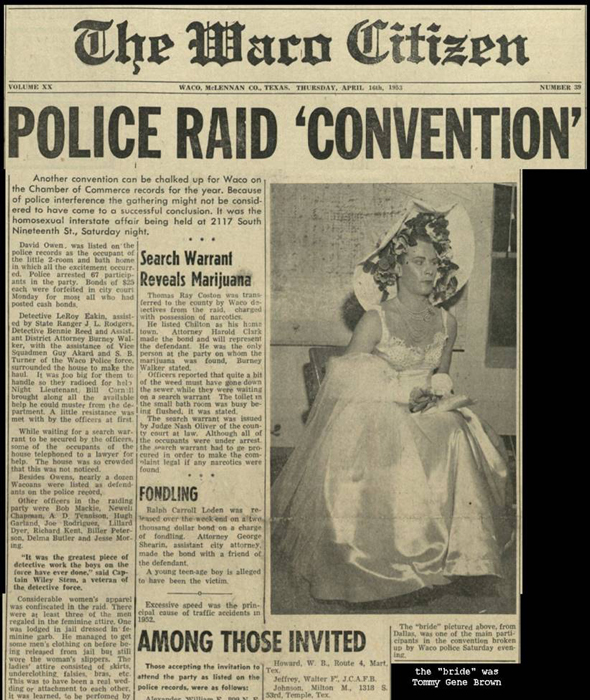 On Saturday, April 11, 1953, nearly 70 gay men packed into a small four-room house at 2117 South 19th Street in Waco, Texas, about 10 blocks from Baylor University. David Owen, a ministerial student at the Baptist school, had invited the men to attend the gathering, which was billed as an “interstate convention” that would culminate in a mock wedding ceremony for two men, one of whom would dress in drag as the bride.

The guests were watching a floor show while sipping on beer, wine, and champagne. The bride was dressed for the event, and an ordained minister waited to officiate. Suddenly, the doors opened, the windows were blocked, and Waco police officers, assisted by a state trooper, arrested everyone. The men were booked into the city jail for “vagrancy” violations, and each posted a $25 bond to be released. But the real damage was done during the coming week when the men’s names and addresses were printed on the front pages of Waco’s two newspapers.

This story had mostly been lost from LGBTQ history until 2015, when Houston LGBTQ historian JD Doyle discovered it in a 1988 issue of the gay magazine This Week in Texas. At the time, Doyle was putting together a collection of history articles written by the late Phil Johnson of Dallas (whose LGBTQ archives are now a part of the University of North Texas library). One of Johnson’s articles focused on the 35th anniversary of the Waco raid.

Doyle went on to find various bits of information about the raid in the Waco News-Tribune, the Waco Citizen, This Week in Texas, People Weekly, DARE magazine and the Berkeley Barb. Piecing together Doyle’s research, OutSmart can now present the sobering story of the raid’s aftermath for two of the Waco party guests whose resiliency helped them rebuild their lives.

Phil Johnson described the Waco gay life in 1953 as small groups of closeted gay men. The bathrooms at Waco’s two train stations and the bus depot were active cruising locations. The basement bar at the Raleigh Hotel was where “eager Air Force men came to be picked up.” Baylor students usually went to Dallas to cruise at the 1313 Club (later named Villa Fontana), hoping to avoid running into anyone they knew.

Johnson notes that big gay parties were rare in the early 1950s, so David Owen’s party invitation was eagerly accepted by gay men in Waco, across Texas, out of state, and in the military. On the day of the party, the men, who were mostly in their 20s, were having a wonderful time partying into the early evening.

Acting on a tip (which Johnson reveals likely came from military police at the local James Connally Air Force Base), nearly 20 members of law enforcement descended on the 1,000-square-foot residence. The officers on foot and in patrol cars struck so swiftly that some of the arrests were made in the automobiles of men who were just arriving at the party. Some of the guests resisted, but were soon restrained. 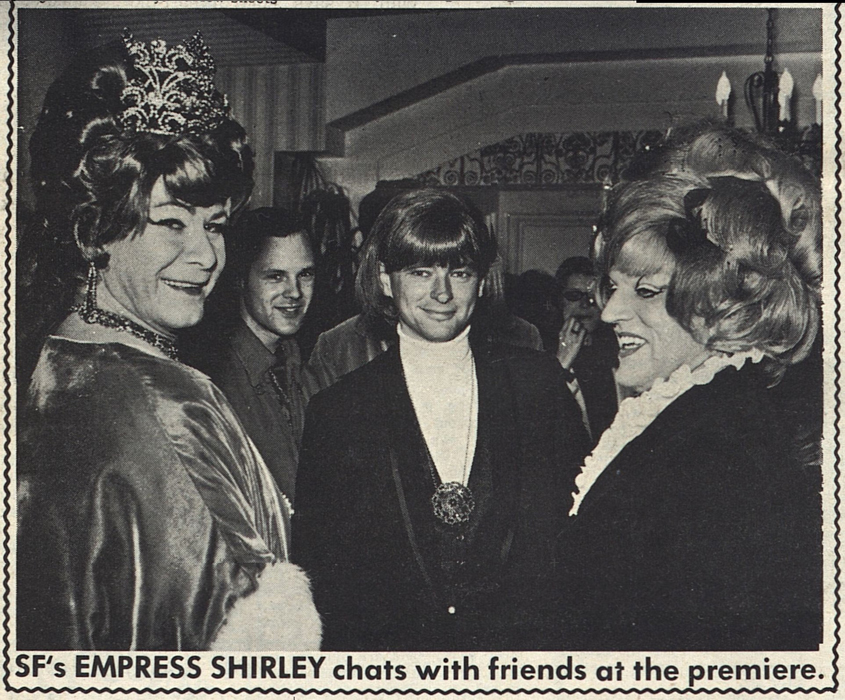 Several of the men hauled to the police station were wearing formal women’s apparel complete with spring hats and high-heel shoes. As the men posted bond on Sunday morning, a red wig, a blonde wig, several women’s dresses, and falsies were stacked on a table in the police detective’s office. Detective captain Wiley Stem had even found a love letter written by one man to another.

Police had no specific law under which to arrest the men, so they used the common excuse in those days: vagrancy. Johnson explains that vagrancy meant that a person did not have more than $25 in cash, and was considered to be “a person who wanders from place to place without a fixed home or livelihood and makes a living by begging or stealing; a tramp; a vagabond.” The men arrested did not fit this description, but none of them wished to fight the charge in court.

In a front-page story on April 13, 1953, Stem told the Waco News Tribune that it was “regrettable” more serious charges than vagrancy couldn’t be filed, but the city was now $1,500 richer from the bonds which all the men forfeited to avoid appearing in court. The story was later sent out over the Associated Press newswire and reported on by several tabloids.

The Waco News Tribune also reported that “law enforcement officers have known for some time that a small cell of homosexuals has been active in Waco,” but indicated the Saturday “convention” was the first of its kind ever held in the city. One veteran police officer said that in his 30 years of policing, he had “never seen anything like this.”

Included on the front page was a picture of Tommy Gene Brown of Dallas, a gay man in his early twenties, fully attired as the “bride.” The story garnered so much attention that a second front-page story was run in the Waco Citizen on April 16, 1953.

The newspapers, which published the names and addresses of the arrested men, noted that the men came from all walks of life, and that most of them had prominent jobs and college degrees. It also noted that many of the guests would now be looking for new employment.

In 1983, This Week in Texas published an article noting the 30th anniversary of the raid. One man, who asked to remain unnamed, then wrote a letter to the magazine, recounting how he had been one of those arrested at the party.

The man was at the time a ministerial student at Baylor in his final year, and due to graduate in August. He was in love with a medical student from Baylor Medical School in Houston who came to Waco for the party.

But the ministerial student was afraid to join the party, for fear of being outed. He did, however, agree to drive his boyfriend to the party and then pick him up at a specified time. When he arrived back at the house, the music was so loud that no one answered the doorbell, so he went inside. As he was leaving with his boyfriend, he opened the front door and came face-to-face with a Texas Ranger. “We were treated like the scum of the earth,” the man recalled. 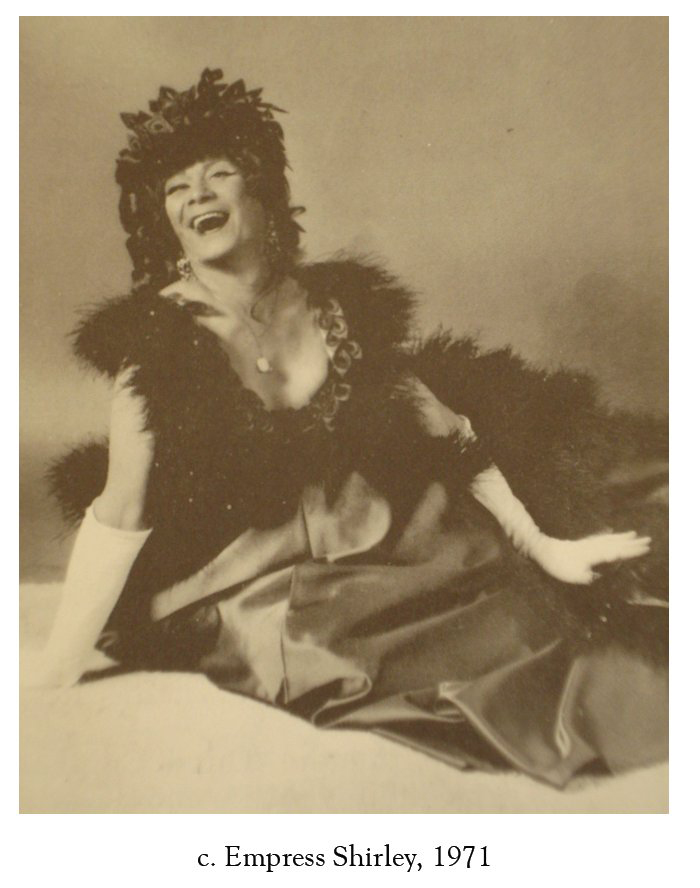 The young man was abandoned by his boyfriend, who did not even offer to pay his bail even though the boyfriend was from a rather wealthy family. So the student had to call a friend in his hometown who wired him the money. He never saw his boyfriend again.

When his name appeared in the Waco newspapers, the student was called into the dean’s office and asked to withdraw from Baylor. The same fate awaited the student who threw the party and a couple of other students who attended.

“This was one of the darkest days in my life, even to this day. I had to go home and tell my pastor and my mom that I was asked to withdraw from the university because I was in a homosexual raid at school.

“But somehow, God used that incident to give me the courage to go forward. Another Baptist school accepted me. I graduated, going on to a Baptist seminary to earn two degrees and receive an honorary degree.

“Today I am a pastor at a Metropolitan Community Church in Texas, and have been blessed with the work of the Lord that I am doing in the church—which I possibly would never have done if that Waco Police Department witch hunt had not occurred.”

In another 1988 Phil Johnson article in This Week in Texas, the story of Tommy Gene Brown, the hapless Waco bride, was told.

Brown was born in Salina, Texas, around 1930. As a young man, he had quite a reputation as a hairstylist and party person, but he achieved his greatest notoriety as the Waco bride.

In an August 1953 issue of the tabloid Dare, a picture of Brown with the arresting officer was used with this caption: “Shown here is one of the season’s unhappiest brides. A Dallas homosexual was about to be married when police broke in, hauled bride to Waco city jail along with 66 wedding guests. The bride, who looked ravishing in a faultless satin wedding ensemble pegged at $350, was about to pledge troth to an older degenerate. Real minister presided. The raid netted the largest number of self-admitted sex deviants in Texas history.” 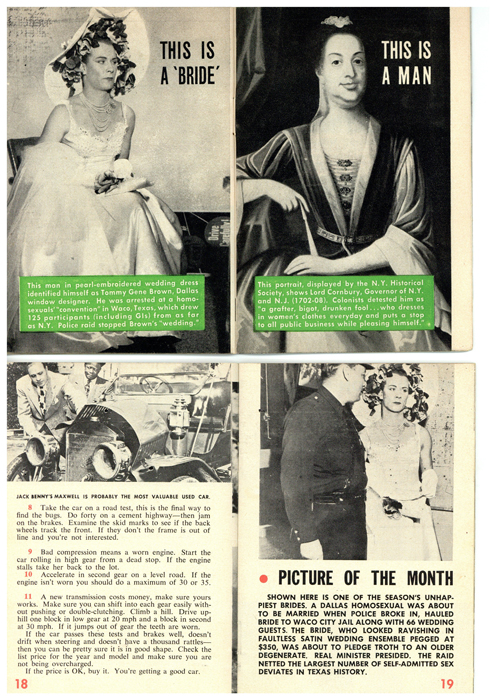 In a September 1953 issue of People Today, a different picture of the bride was published with this caption: “This man in a pearl-embroidered wedding dress identified himself as Tommy Gene Brown, a Dallas window designer. He was arrested at a homosexuals’ “convention” in Waco, Texas, which drew 125 participants (including GIs) from as far as N.Y. Police raid stopped Brown’s “wedding.”

After the raid, Brown returned to his home in Dallas and still held his head high, going on to live a productive and colorful life. In 1956, Brown met a man named Fred and fell in love. In 1959, they moved to the more gay-friendly San Francisco. Fred worked, and Brown kept up the home.

Brown became involved in one of America’s first gay organizations, the Society of Individual Rights (SIR), where he helped with the dances and costumes for gay productions of The Boy Friend, Pal Joey, Hello Dolly!, and The Wizard of Oz.

As a child, Brown fantasized about being like Shirley Temple, so his friends called him Shirley and the name stuck. In 1968, Brown won the title of Empress III Shirley of the Imperial Court of San Francisco. He was the first person to campaign for the title. That year, Shirley Temple Black, who had been a child actress, was running for Congress. Brown went to one of her campaign rallies and brought back buttons and matchbooks that read “Shirley” so he could use them in his empress campaign.