It sounds like the opening of a joke: What do you call two dentists in love? But there’s no punch line here. Just a super-sweet story of two guys who met in dental school, fell in love, and made it legal just before a pandemic swept the world.

When the couple was first introduced, Austin was just starting dental school and Sam was graduating. “We met through dental-school friends. Sam messaged me and asked me to go on a date, and the rest is history,” Austin says. Their first date was the day before Valentine’s Day in 2015.

But it was when Austin brought Sam to Louisiana for a family Thanksgiving in 2015 that he knew Sam was the one. “He meshed so well with the family, and we had a delightful trip. That was when I realized he could easily become a part of my family.” 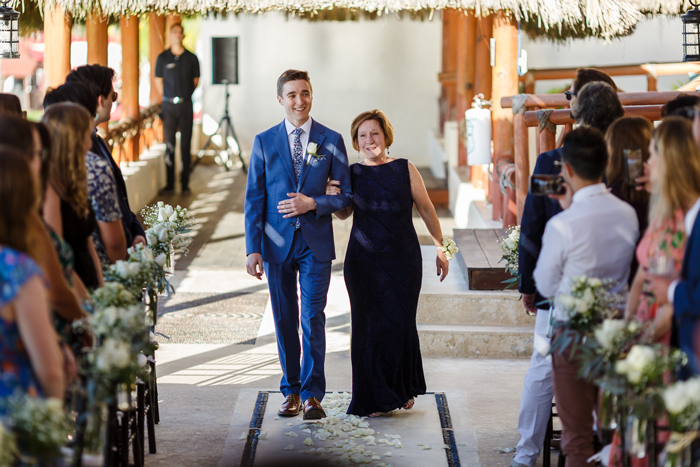 For Sam, it was more gradual. “There wasn’t one specific moment in time when I realized Austin was someone I could spend the rest of my life with. As we spent weeks and then months together, any doubts I had about a future together disappeared.”

Austin proposed to Sam on November 2, 2018, when they were in New York City on vacation. “I toyed with the idea of a grand proposal at one of New York’s famous landmarks, but opted for a more private proposal at a nice dinner. I think Sam appreciated an intimate proposal more than a public one.”

Sam was more than surprised, since he had begun planning how he would propose on that very same trip, but of course didn’t have the chance to carry out his plans. “He surprised me at a wonderful dinner at Dirty French in Manhattan, and I was ecstatic to say yes.”

The happy couple was married on January 4, 2020, at the Hotel Playa Fiesta in Puerto Vallarta, Mexico, with 45 guests in attendance. The couple had visited the resort multiple times in the past, so they decided that would be the perfect place to have their ceremony. Austin’s best friend from college, Selena Richey, officiated the wedding. “It was her wedding in Cancún the year before that prompted us to have a destination wedding. We had such a nice trip at her wedding, and we wanted to emulate it. The experience was absolutely perfect in every aspect,” Austin says.

Both Sam and Austin are incredibly grateful that their wedding was before the pandemic reached the Americas. “We are so happy to have the memories of our trip before this year went crazy. We were able to enjoy early 2020 with an awesome wedding before COVID changed everyone’s plans for the year,” Sam says.

The day was not without its bumps, though. On the day of their wedding in Puerto Vallarta, two of their guests injured themselves and had to be taken to the hospital. “Thankfully, the injuries were minor and both guests returned in time for the ceremony, so they were able to enjoy the reception festivities,” Austin says.

Their ceremony was a traditional one, but without any religious aspects. “By having a great friend officiate our wedding, the ceremony felt very personalized for us and our guests,” Austin explains. And using LGBTQ-friendly vendors was important to them. “Hotel Playa Fiesta took care of the wedding planning, and they are very open-minded and host many LGBT weddings each year,” Sam says. 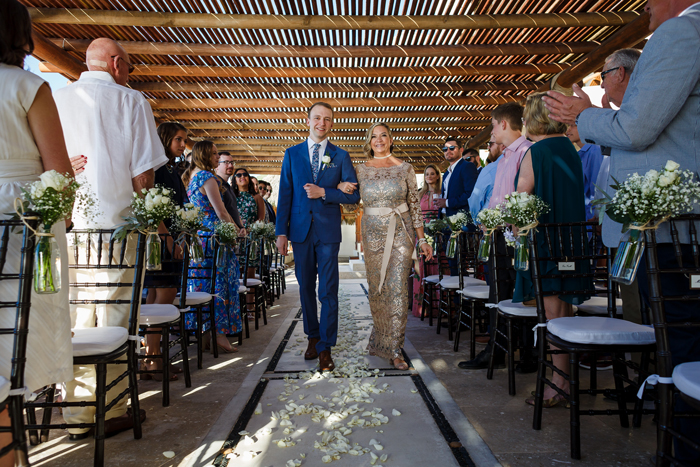 Hosting a destination wedding was not without its challenges, of course. It required a lot of coordination between guests and the hotel, Austin says. They ended up spending hours trying to ensure every guest was fully informed about all of the details. “Sam made a fabulous wedding website full of every detail you could imagine, but some people still missed the necessary details. Thankfully, everyone arrived safely at the hotel without any hiccups.”

Austin and Sam had planned to honeymoon Europe this fall, “But the pandemic has put that plan on hold. We hope that in 2021 it is safe for us to travel abroad to enjoy a much-desired honeymoon,” Sam says.

The pair is smitten with each other in so many ways. Austin loves that Sam loves to make Indian food and is a master of curries. Sam loves that Austin, always the comedian, knows how to make him smile when he’s feeling down.

One thing’s for sure: with such a clear and immediate connection, this is one relationship that literally has some teeth in it.