Landon Richie’s life has been an odyssey of authenticity. From his earliest memories he knew who he was, and since coming out as transgender at the age of ten, he has been an advocate of trans rights.

The brave 18-year-old’s personal journey, and his work as a political activist, are being recognized this year as he becomes Pride Houston’s first Tomorrow’s Trendsetter Grand Marshal. This new marshal category was created to honor local LGBTQ youth who are making a difference.

“It’s nothing I ever saw coming,” Richie says, adding that he is honored and pleased that LGBTQ youth are being highlighted. “Young people, and our experiences, are so often overlooked.”

Richie was born to Aaron and Erika Richie in Houston on October 31, 2002. He is a third-generation Texan who grew up in the Sugar Land area and graduated from Dulles High School in June.

After struggling to understand his gender identity in elementary school and using the Internet to learn more about what it meant to be trans, a 12-year-old Richie attended summer camp with another trans boy in 2014 and learned more about trans life. “That brought me total clarity,” he remembers.

When Richie was selected for his middle school’s honor band at the end of sixth grade, he knew he would be expected to wear a white dress for their concerts. Richie struggled with this issue, knowing that wearing feminine clothing would invalidate everything he knew about himself.

Shortly after camp, he came out to his parents, hoping they could help. “I sent my mother, who was just down the hall from me, an email telling her I was trans.” Richie says he then sat against a wall with his knees in his chest, shaking. “I had read about so much rejection of trans youth.” But after reading the email, Richie’s parents showed him unconditional love and a willingness to learn by attending PFLAG Houston meetings.

“LGBTQ people need to celebrate our personal journeys, and those of the people who ignited the movement.”

Before the start of his seventh-grade year, Richie’s mother talked to his school’s band director, who was extremely understanding about Richie’s gender identity and assured him he could dress in a tuxedo for concerts.

Richie had his name and gender marker legally changed before he entered the eighth grade, and he began to come out to close friends. That year went smoothly for Richie, aside from having to use the nurse’s bathroom to change clothes for gym and band. “It was still alienating,” Richie recalls. “I wasn’t accepted as a boy or a girl.”

A Young Activist Speaks Up
Also that year, Richie volunteered for block walking and campaigning for the Houston Equal Rights Ordinance (HERO), a City Council initiative that would have prohibited discrimination on the basis of gender identity and expression (in addition to more than a dozen other characteristics). The rhetoric of fear and ignorance that was aroused by this political fight pushed him to become more of an activist.

Heading into high school, Richie and his mother sat down with school officials in hopes of resolving the bathroom issue. When the assistant principal objected to Richie using the boys’ bathroom, his mother suggested they talk to an American Civil Liberties Union (ACLU) lawyer who had experience fighting for the rights of trans students. The assistant principal backed down and allowed Richie to use the boys’ bathroom. Band practices were Richie’s most affirming part of his school day, and they became his safe haven throughout his high-school years.

In 2017, Richie traveled to Austin to testify against Senate Bill 6 (SB6), which prohibited trans-friendly bathrooms. While waiting to testify, he heard some of the negative speakers that preceded him. “I had to leave the room several times, because I was shaking while listening to their testimonies.” The bill ultimately failed, and Richie returned to Austin in 2019 for a lobby day where he addressed a Capitol rally. 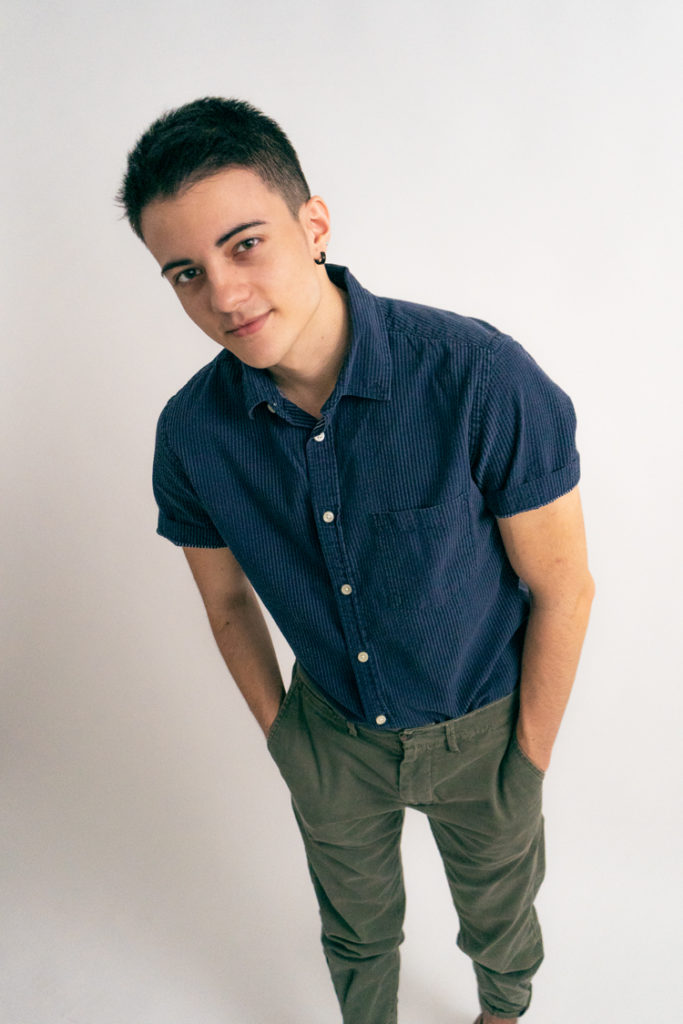 Protesting the anti-trans bill also inspired him to begin using his Instagram account to advocate for trans rights and share personal stories that conveyed an accurate trans experience. He now has over 28,000 followers from around the world, and they often ask him for advice on coming out, questioning one’s gender identity, and where to find trans resources. Richie says using his platform to share this information with trans youth is important, because there are little to no resources for transitioning as a minor.

Richie is now in his freshman year at The Honors College at the University of Houston, majoring in political science and minoring in sociology. Due to the pandemic, most of his classes will be virtual. After college, Richie plans to attend either the UH Graduate College of Social Work (in order to do political social work) or enroll in law school so he can become a civil-rights attorney.

The Pandemic, Pride, and Politics
The COVID-19 pandemic has had its impact on Richie’s life. “I left high school for spring break and never went back. The last two months of school were spent online. It’s been a lonely experience.”

And while the pandemic canceled all of Pride Houston’s in-person activities, Richie was  impressed that the organization integrated the Black Lives Matter movement into its online Pride 2020 lineup. “It’s a conversation that is long overdue,” he says, noting that he attended the first two protests held in Houston following George Floyd’s death “because of the way Black communities have been treated consistently throughout history. That’s not acceptable for a country that prides itself on justice and equality for all.”

Richie, who identifies as gay, says it is important to celebrate Pride so that we make sure we realize how far we have come, and how far we still must go. “[LGBTQ people] need to celebrate our personal journeys, and those of the people who ignited the movement.”

While Richie is encouraged by all the TV shows that include trans characters, he is disappointed that there are relatively few transmasculine roles. He intends to do something about that by becoming a role model and improving trans visibility through his participation in Gender Cool, an organization dedicated to promoting new and authentic images of trans Americans.

Richie has strived for years to be authentic. “I’ve learned, and re-learned, what authenticity is and how it applies to me, and how it affects those around me.”