Austin Dexter Williams is Pride Houston’s 2020 Male-Identifying Grand Marshal, an honor that he admits was not on his radar. Although he is excited about his win, he is also aware that “there is great responsibility behind it.” He is only the second Black man to be selected as a grand marshal in Pride Houston’s 42-year history.

Williams was born in 1960 at the historically segregated Black hospital in Lafayette, Georgia, where his mother had to be rushed after being ignored at the city’s main hospital while she was in labor. He was raised in Chattanooga, Tennessee, where he excelled in the arts at his predominately white high school as president of the drama club and a member of the school choir. Show business was Williams’ first love, and he also took dance lessons in hopes of becoming “the next Ben Vereen.” Over the years, he starred in school productions of Oliver, South Pacific, Pippin, Showboat, and Chicago.

At the age of 16, Williams came out after his mother found a love letter tucked under his mattress that a male classmate had addressed to him. His parents needed time to adjust to his sexuality, but they were supportive by the time Williams was 19 and dating a Marine who had been deployed to boot camp. Williams’ mother suggested that he write his friend a note “because he must be very lonely now.”

“I just want people in my community to feel loved.”

Williams chose the University of Tennessee at Chattanooga, where he majored in psychology with a minor in theater. By the time he graduated, pragmatism had won out over his dream of performing, and he moved to Atlanta to head up a visual-marketing team for Macy’s department stores.

After a twelve-year career at Macy’s, Williams went to work for The North Face, a company known for their activewear and outdoor sports gear. The perks that came with that job included a lot of fun trips to the ski slopes of Aspen, Colorado.

When North Face issued layoffs, Williams decided to move to Houston after seeing the city ranked number one on a list of top cities for Black men. He soon found a job as a regional design specialist with Retail Concepts, another sportswear firm.

From Designer to Activist

In 2017, Williams became the social-media marketing manager for Bee Busy, a local organization that offers free testing for HIV, syphilis, and hepatitis in addition to a wide array of safe-sex classes. He now serves as the organization’s quality assurance specialist. Williams has been featured in several public-service announcements related to HIV prevention, teen pregnancy, and safe sex. He also hosts various Bee Busy forums such as Trans 101, The MSM (Men who have Sex with Men) Power of Sex, and Know Your LGBTQ+ Rights.

In the summer of 2012, Williams met Dr. Keith Clarke, the love of his life whose passion for community matched his own. Their first date was at El Tiempo Cantina in Montrose, where they sat for hours and fell more and more in love as they talked. In 2017, the men married.

Shortly after moving to Houston, he began to involve himself in various LGBTQ organizations. The first community event he organized was a forum titled Under the Rainbow, a discussion platform aimed at “understanding the pressing concerns on who we are as gays, lesbians, trans, asexual, nonbinary people.” Later, he organized other events to increase awareness about race relations in the LGBTQ community.

In 2013, Williams created the Community BYOP (Bring Your Own Picnic) where LGBTQ folks played games, shared food, and reunited with old friends. At each picnic, he featured one nonprofit organization to help raise funds and awareness. 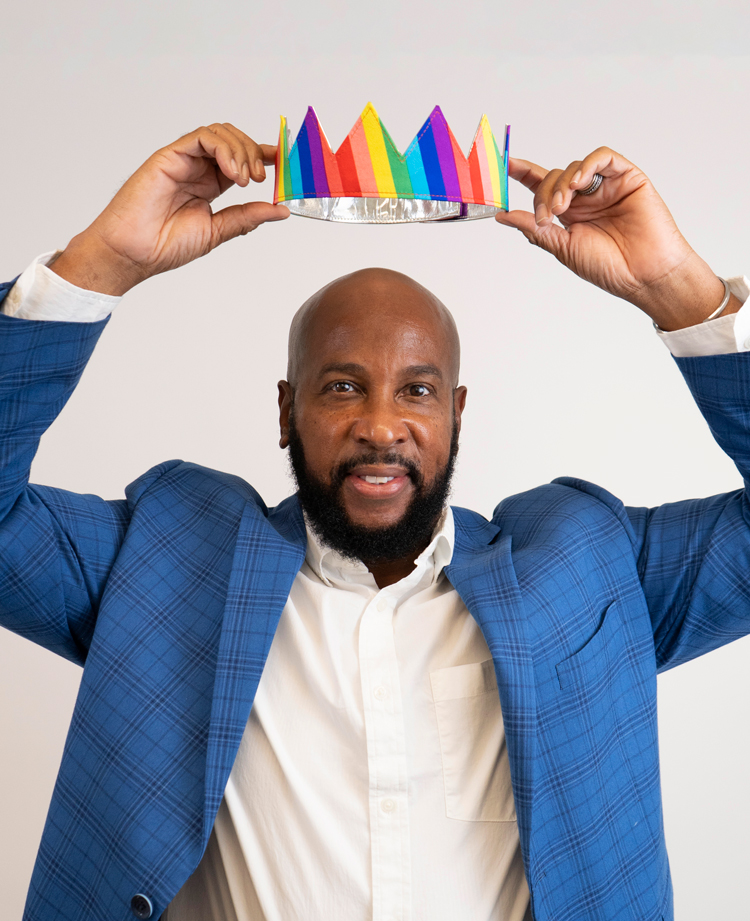 Williams’ motto is “I just want people in my community to feel loved.” He and his husband teamed up to show that love for their community by hosting monthly events they call Keith & Dexter Presents, where people of all ages gathered for lighthearted fun.

The COVID-19 pandemic has been difficult for Williams and his husband, because they are highly active people and have not been able to celebrate with others. He says they remain active online, trying to help raise money for their causes.

Williams notes that it’s important to celebrate Pride because “we should never let anyone tell us that we are not worthy, not responsible, and not allowed to do the things we do.” Reflecting on the death of George Floyd and the resulting wave of Black Lives Matter demonstrations, Williams emphasizes that “Black Lives Matter has put this country on notice. We are fully aware of mainstream America’s systematic efforts to silence and brutalize Black people by over-policing Black communities. We will not be silenced.”