Ash Hall has a particular knack for storytelling. Whether it’s translating complex legalese into accessible language that all communities can understand, testifying against anti-trans “bathroom bills,” or helping LGBTQ politicians win their elections, the 29-year-old nonbinary activist has used that gift to ensure that the voices of marginalized groups are not only heard, but protected.

“[After 10 years of participating in] legislative advocacy, I’ve learned that words matter quite a bit,” Hall says. “The fact that we have to have conversations about whether our communities deserve to have rights in 2020 is actually inherently violent. I want people to understand that our lives are not up for debate.”

“The fact that we’re having conversations about whether our communities deserve to have rights in 2020 is actually inherently violent. I want people to understand our lives are not up for debate”

Hall, who uses they/them/their pronouns, is a digital coordinator in Austin at the Texas Civil Rights Project (TCRP), a legal-advocacy organization that focuses on racial and economic injustice, criminal-justice reform, and voting rights. Hall’s work for the organization involves “teaching people online about the work we’re doing and how they can get involved.”

“A lot of [my job] is [telling stories], and I see that as the big connecting line in my career,” they explain. “To me, [TCRP’s focus includes] some of the most important issues that our state and our nation are facing. It involves some of the most vulnerable people losing their voices, being detained, being locked up, being treated horribly—I see all of those as being queer issues.”

Hall says that outside of their day job, they’re known in the LGBTQ community for speaking out against anti-LGBTQ bills in the Texas Legislature, a form of activism that often involves debates with right-wing lawmakers. “I seem to have a way of breaking through,” Hall says, “especially to the moderate Republicans.”

In March 2017, Hall joined hundreds of Texans at the Capitol to share their experiences and testify in opposition to Senate Bill 6 (SB6), a discriminatory “bathroom bill” designed to deny transgender, gender nonconforming, and nonbinary folks the right to use the restroom that corresponds with their gender identity.

Watch Ash Hall testify in opposition to SB6 below:

“Instead of saying that [trans people] are a part of the problem, I’d rather you bring us to the table and ask us what our ideas are for ending violence,” Hall told the Legislature. “It’s not going to be locking us out of the bathroom, it’s going to be talking about creative ideas that we can make in legislation to fix these problems.”

SB6 ultimately failed, dying in the House during a midsummer session that Governor Greg Abbott and Lieutenant Governor Dan Patrick called after the 85th Texas Legislative Session failed to pass the anti-trans measure.

Born and raised in Clear Lake, Hall says their fight against anti-LGBTQ discrimination began over a decade ago while attending Baylor University. That Baptist school in Waco denounces “homosexual behavior” as well as the students who participate in “advocacy groups which promote understandings of sexuality that are contrary to biblical teachings,” according to its website.

For the sake of Hall’s mental health and well-being, they transferred to the University of Texas in Austin a year later, got involved in a queer student-advocacy group, and eventually graduated with a bachelor’s degree in psychology and a minor in women’s and gender studies.

“While UT Austin wasn’t perfect, to go there from Baylor made me think about how dangerous certain places are in this state for our community. I’ve never forgotten about that,” Hall says, noting that they realized their nonbinary identity while in college. “For years, I had no idea there were options in gender variance. With time, I started to piece together that I wasn’t just uncomfortable with a lot of the gender norms pushed onto women. I was uncomfortable being seen as a woman.

“I could never be stuck with binary options ever again,” they continue. “I could see both the beauty and the harm that came with the binary [male/female option], and wanted pieces of each while rejecting them both. Nonbinary absolutely made the most sense. [Affirming my gender identity] deepened my activism in a lot of ways.”

After graduating, Hall began their journey into the world of politics, assisting the campaigns of pro-equality candidates and helping organizations secure rights for LGBTQ people.

Hall worked in Houston as a field-team intern for Annise Parker’s mayoral campaign in 2011, and later became a political manager for the LGBTQ Victory Fund in Washington, DC. Hall’s other political positions include serving as a field director for State Representative Celia Israel, a government-relations manager for Equality Texas, and a policy analyst for the Texas House of Representatives. 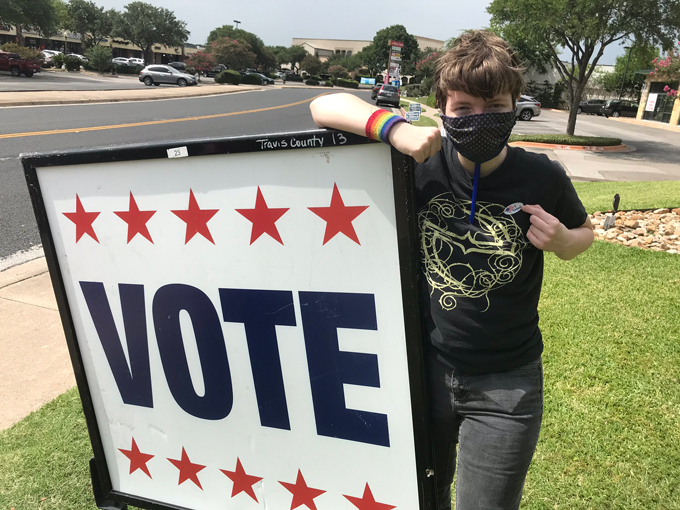 “Part of what drives me and the work I do is the understanding that every single time someone does something that affects LGBTQ people in a negative way, even [if it’s just] a tiny thing, it’s adding to our collective trauma,” Hall says. “Underneath everything—wanting to have the same rights as others, wanting equity, wanting the things we need for ourselves—I want a world where our youth want to see what’s next, and want to [live] without worrying about being killed. It really is a life-or-death wellness-level issue for me.”

Driven by their background in mental health, Hall’s role in the TCRP has focused on uplifting marginalized voices that aren’t traditionally heard by the average Texan.

“It’s not just [the LGBTQ] community, either,” Hall explains. “Anybody that’s facing mass amounts of oppression—whether that’s the Black community fighting against racial inequality, immigrant students fighting for their right to an education, or teachers fighting for equal and safe work environments—we’re all facing oppression in different, intersecting ways. It’s our responsibility to reimagine spending in this country, push back on [discriminatory laws], and take care of ourselves and one another.”

To de-stress, Hall enjoys playing piano, reading poetry, and playing Animal Crossing. “There’s no pandemic or transphobes there,” Hall laughs, adding that hugging is something they especially miss in these times of social distancing.

In the future, Hall hopes to continue advocating for queer Texans as a state representative. “After everything the trans community has faced from the State, there should be some representation [in the Texas Legislature] for someone who’s nonbinary and trans,” Hall emphasizes. “We deserve someone with lived experience to prevent things like bathroom bills from ever happening again. I want queer people across Texas to know I’m in their corner fighting for them.”

This article appears in the August issue of OutSmart magazine.