Not every local artist can say they’ve had a number one hit song on the iTunes charts. But Attxla isn’t your average Houston-based artist.

The openly gay singer-songwriter and producer went viral in Germany earlier this year after he wrote the words and sang on “Unity” with international artists Salkin and Finn Schaller. His song “Roots,” with the U.K. DJ duo Unknown Brain, also garnered two million streams on YouTube, and over one million listened on Spotify. These artists were eager to collaborate with Attxla after discovering his tracks with DJ MAVEN online, where he’s uploaded his music since 2013.

Originally from Port Arthur (home of legendary artists Janis Joplin and UGK), Attxla, also known as Attila Mosely, has been writing, recording, and generating tracks since he was 12 years old. Following four years of working as a professional music producer for other artists, Attxla, now 23, will release his own debut album, Ebb, on August 23.

“It’s been a long time coming,” Attxla says. “I’ve worked on my first record for about three years. In the process of making my own music, I was producing [other artists’] records, and some of the songs that were supposed to be on my debut album ended up on theirs.”

Attxla says that it’s been difficult to take off his producer hat to view his music through an artist’s lens during the creation of Ebb. While working on tracks, “I tend to think, ‘Who would this song sound good for, and what if I customized it to their voice?’” he admits. 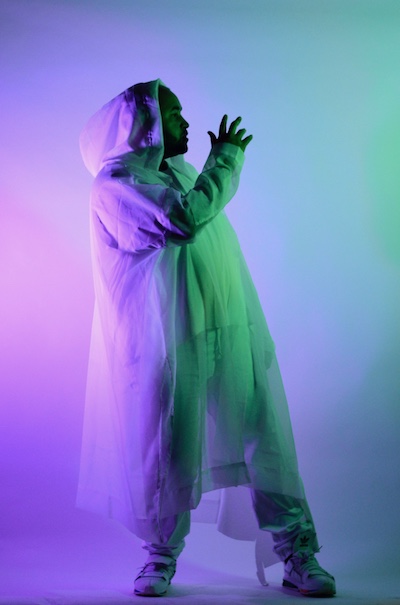 In addition to joining forces with Salkin, Schaller, MAVEN, and Unknown Brain, Attxla produced several albums for Houston-area artists at his in-home studio. Most recently, he worked on creating gender non-binary performer Wade in the Sonic Joy’s 2018 release Sexspells, and queer-femme artist Stoo’s
Supersuit, which dropped in July.

“I started producing out of necessity,” Attxla says. “I couldn’t find what I wanted to hear anywhere else. When other people found my stuff and liked it, I started working with them. But I always advise the artists I work with to take their work to someone for mixing and mastering, because I’m not a vocal engineer.”

“John has done for me what I’ve done for other artists,” Attxla says, adding that Stephens has been a real mentor to him. “He really expanded on all of the visions I’ve had for this record. Honestly, he’s been the most instrumental part of this process.”

Ebb is a 10-track pop album, and features song collaborations by Houston artists Lyta, Kenner Wells, and Nate Drop. The record has an aquatic theme (its title refers to the incoming and outgoing “ebb and flow” phases of a shore’s tide) and tells the story of Attxla’s life over the past two years.

Track one of the album is Attxla’s single “Choose Him,” a slow-burning jam that poetically describes not being your crush’s first choice. Other songs, like his latest release “Feel It,” reveal Attxla’s descent to the bottom of a figurative ocean, where nothing can be found but death and isolation. “I’m not going to lie, the album is a bit depressing,” Attxla laughs. “I’d describe it as ‘hurt, but hopeful.’”

Whether Attxla’s album is as melancholy as he suggests, it’s sure to be a smash hit. His dynamic beats and smooth vocals are perfect for sad bops to cry-dance to.

Following the August 23 release of Ebb, Attxla plans to host a release party later in the month. More info on the event will be available at outsmartmagazine.com.