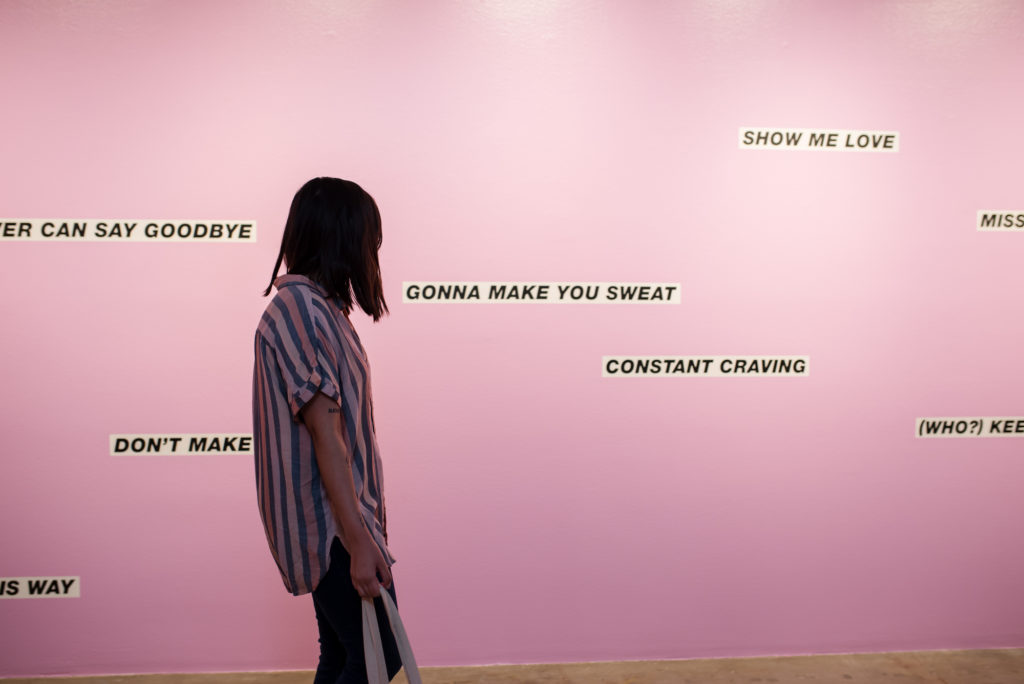 Fresh on the heels of the 50th anniversary of the Stonewall Riots, the Contemporary Arts Museum Houston (CAMH) continues displaying art inspired by the revolt widely considered to be the genesis of the modern-day queer-rights movement. Steven Evans: If I can’t dance, it’s not my revolution! is on display in the museum’s Nina and Michael Zilkha Gallery through Sunday, Oct. 13.

Evans, whose career spans more than three decades, creates pieces that explore connections between music, language, memory, identity, and collectivity. The CAMH exhibit offers two distinct sections that work in concert to reveal the ways popular song titles can be linked to moments of social and political change.

The first area consists of three lavender-colored walls, with one song from each year since the Stonewall uprising to create what Evans refers to as “concrete poetry.” Evans’ showpiece uses a bold typeface rendered using black latex and adhesive vinyl to grab the viewer’s attention.

A plaque inside the viewing space explains the reasoning behind a few of the song choices. Titles and lyrics from Diana Ross’ “I’m Coming Out,” The Weather Girls’ “It’s Raining Men,” k.d. lang’s “Constant Craving,” Lady Gaga’s “Born This Way,” and Sly and the Family Stone’s “Stand!” provide “evidence of the ways that recording artists support progressive sexual politics affecting queers, women, and other marginalized groups. Whether they are heard on the radio or on dance floors, these songs encourage hope, energy, and perseverance in turbulent times.”

The songs’ vertical positioning reflect the artist’s emotional response to the tunes. For example, Soft Cell’s “Tainted Love,” a reflection on the AIDS crisis, is placed near the floor while Christina Aguilera’s “Beautiful,” a song about inner beauty and self-love, nearly touches the ceiling.

Evans worked on the piece for nearly three years, using the Stonewall 50th anniversary as an organizing element after finding out that the show was scheduled for this summer. 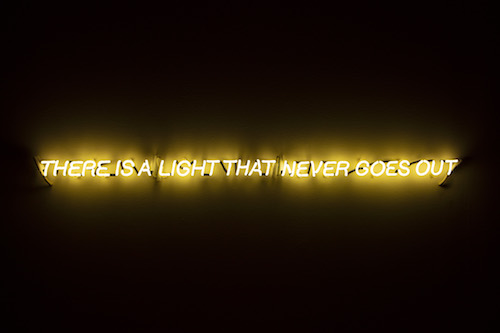 “The songs are part of the collective consciousness, but they also have personal meanings to the viewer or listener—associations that might remind them of a love affair, a bad breakup, or something personal,” Evans says. “It’s a balance of history and memory, collective and individual, public and private. Looking at Stonewall, and all the changes that have come through that movement over the years, I thought it was the perfect opportunity for me to respond in that way.”

The other half of the display is a dimly lit room with ten neon light fixtures similarly inspired by song titles. The lights shine in blue, red, white, yellow, and orange tones to make the colors pop.

“They stand alone, and the viewer experiences one at a time. It’s less of a history and more of a personal memory with these songs,” Evans explains. “They are iconic songs like ‘Don’t You Want Me,’ ‘Got to Be Real,’ ‘Relax,’ ‘There’s a Light that Never Goes Out,’ and ‘It’s Raining Men.’”

“For the neon works, I was thinking a lot about bars that might have neon signs or advertising displayed in some way. I was thinking about bringing this inner light to the song. The neon pieces are more sculptural and glow, and as a viewer you become drawn to them because of the light—almost like a moth to a flame,” he said.

While the song titles are familiar, the exhibit’s title requires a history refresher lesson to understand. Evans explains that the title is a derivation of a quote from Emma Goldman, an early 20th century political figure. Her statement “If I can’t dance, it’s not my revolution” touches upon the idea that revolutions are to make life better so that people can express joy.

“For me, that was resonant in terms of using dance music for subject matter, and also thinking about my own history growing up and being closeted as a young man and still feeling that my behavior needed to be policed because we were not allowed to express joy,” he says. “[That is not as much of a problem today], but if you grew up at a particular time, you internalized it because of fear. You didn’t express that joy, because being LGBTQ might bring bad consequences. I wanted a revolution so that we can all be who we are.” 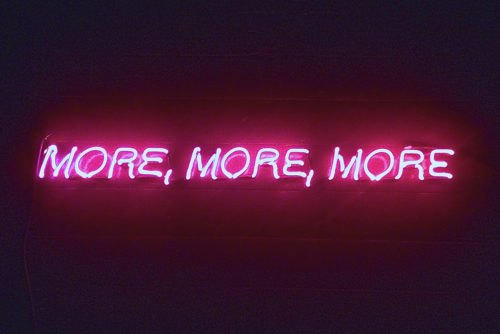 To see the museum’s entire lower floor filled with Evans’ work speaks to the importance of its meaning. It’s even more impressive considering that the art nearly didn’t happen.

“The ‘It’s Raining Men’ piece was my first one. I was never really satisfied with it. I took off from 2001 until 2012. I didn’t make anything. I only thought about work I might make someday,” he recalls. “When I began making art again, it was in response to a personal crisis, and trying to work my way out of that by accessing my creativity. That’s when I returned to the neon songs and they really began flowing.”

The exhibit’s pieces are tied together by the universal language of music, and they can be understood in a myriad of ways depending on the eye (and ear) of the beholder.

“[This art is] based around issues of identity and memories of history. I come at it from the experience of a gay man, but the work is made for everyone,” Evans says. “The song titles  [speak to everyone]. It tells a particular story in one reading, but it has an openness to it that works for everybody.”