Governor Greg Abbott held a ceremony Thursday night to sign the so-called “Save Chick-Fil-A” bill into a law.

SB 1978, a religious liberty bill, was filed by Sen. Bryan Hughes (R-Mineola) after San Antonio City Council banned Chick-Fil-A from its airport over its support of groups with anti-LGBTQ views. The bill, which passed May 20, bars government entities from taking “adverse action” over an individual or organization’s affiliation to a religious organization.

Though the bill became a law month, Abbott again signed SB 1978 during a public observance. The governor Tweeted a video of the signing, where he is shown surrounded by Chick-Fil-A cups and sandwiches.

“Today I signed the @ChickfilA law in Texas. And, had a great lunch. No business should be discriminated against simply because its owners donate to a church, the Salvation Army, or any other religious organization,” Abbott wrote on Twitter. 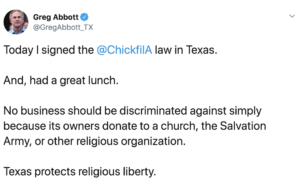 Because religious freedom is already protected, SB 1978 creates virtually no change in Texas law. Queer activists, including the political advocacy organization Equality Texas, believe “Save Chick-Fil-A” was an anti-LGBTQ effort.

“This bill is a ‘dog whistle’ to encourage discrimination against LGBTQ Texas, and advances messages that hurt the LGBTQ community,” Equality Texas said in a statement on May 20.

OutSmart reports that of the 20 discriminatory bills proposed during the 2019 Texas legislative session, SB 1978 was the only anti-LGBTQ bill to pass.