If you’re walking the downtown Pride parade route on June 22, look for the two big tents with banners reading “Ronje Family—Celebrating Diversity.” You’ll be more than welcomed, and you might even score some fried chicken.

Herman Ronje, 62, is a Texas native who moved to Houston in 1979. He’s a longtime swimming-pool guy who is a principal with Venture Pool Company, along with his ex-wife, Jane, and two of their sons. It’s very much a family affair—as is their tradition of spending the day at the Houston Pride festival and parade.

“It kinda started when the kids were small,” Ronje says, “and I would take our four and all of their neighborhood friends downtown to the Thanksgiving Day parade. We all had fun, but by the time they got to high school they didn’t want to go anymore. So I asked them about going to the Pride parade, and they thought that would be cool.”

Every year since 2002, Ronje has rounded up his kids (and now even some grandkids) and made a day of it.

“It started off with just a couple of lawn chairs,” he says. “But now we have tents and tables and food, and it’s family and lots of friends.” Sometimes as many as thirty people show up. And while it’s all fun and fellowship, their party is also a way to commemorate a sad chapter in Ronje’s family history.

“My brother Homer was gay,” Ronje says. “He committed suicide in 1980. I know it was very hard for him back then, being gay and Hispanic. But we didn’t talk about it. My mother always claimed he was engaged, and died in a car accident. I wish I’d known then what I know now about being gay. Things might have been different for him.

“I want my family and friends to know we’re all the same. That’s why we do this every year,” he says. “The last thing I want is for someone I love to be gay and afraid.”

In 2015, the nighttime Pride parade moved downtown from its original Montrose route on Westheimer Road. The new downtown route runs down Lamar Street to turn on Smith and then back on Walker. 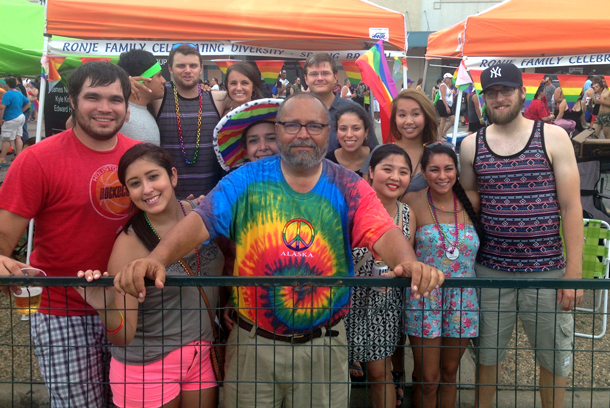 The move wasn’t without controversy. “I didn’t like it at first,” admits Ronje. “But it just makes so much sense. It’s not just a neighborhood event anymore, it’s a citywide event. Now, more people than ever can attend.” For the first few years, the family found a viewing spot near the Hyatt Regency, where they rented hotel rooms for breaks during the day. Now they have a shady spot farther down the route, closer to parking. They still like to rent a hotel room for indoor breaks.

“We get here about eight in the morning,” Ronje says. That’s the first piece of advice he gives parade viewers: get there early. Even though the parade doesn’t start until 8:00 p.m., if you want a good spot you need to show up early.

“And pace yourself,” he adds. “I’ve seen people wasted by 4:00 p.m., and they wind up missing the parade altogether.”

Plan for anything and everything, he emphasizes. Some people spend the day at the neighboring Pride festival in front of City Hall, but for Ronje’s group it’s about making their own festival and celebrating family and diversity.

“People we know always drop by,” he says. “We are happy to see them and share. We always have cold drinks, lots of fruit and sandwiches, and fried chicken from Disco Kroger,” he laughs. “That’s been a staple for years.”