Though queer characters now have more room to flirt and flourish and fall in love on TV screens, it’s still no easy journey for gay TV shows to get the green light. In early May, Houston-raised writer and actor AJ Knight launched the Kickstarter for his TV pilot Daisy Boy, a lush series about the secret fantasies of a closeted Southern teen. As Knight entered the final week of his $50,000 fundraising campaign, we spoke with him about his vision for Daisy Boy and how the Houston community supports his dreams. 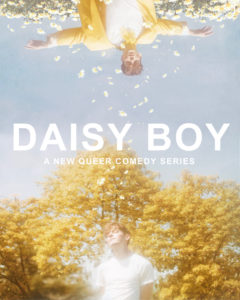 David Goldberg: Where are you in the process of the fundraiser?
AJ Knight: We are about [six] days from the end of the Kickstarter campaign for Daisy Boy. We’re raising money so that we can produce the pilot episode and show it to people and say, “Hey, this is our idea. Don’t you love it? Don’t you want us to make it and hopefully get it up on Netflix or Hulu?

What unexpected challenges are coming through?
Oh, my goodness—Kickstarter is no f–king joke. Going in to it, I knew that we’ve made this amazing video that I feel so, so proud of. We’ve worked so hard on it and we’re about to launch, and then the work is going to begin. I think I had no idea what was about to happen and what those next thirty days were going to demand of me to raise all of this money to make this show. It has pushed a boy to his limits, but it’s also been great. A lot of times I am afraid to ask for help, and I’ve literally been forced to do that. It’s been beautiful to see how people from back home and from all over the world are really banding together to get this made, because they believe in it—which is crazy to me, or not crazy at the same time.

When you’re making your dreams come true, you have to take a big risk. What advice do you have for people who are afraid to take a leap?
What I’ve kept telling myself is that I know that it’s going to work out. I just don’t know how. I’m trying to keep working hard and trusting that if this is supposed to happen, it will. I really believe that it’s supposed to happen, so I’m just trying to stay in that positive headspace, as spiritual as that sounds. You gotta stay open to whatever comes, and try to make it happen. But it is hard—it is so hard. You step out with, “I have this idea, and I think this idea is worth this much money.” I hope everybody else thinks so, too.

There is a proliferation of queer characters on TV right now, as opposed to ten years ago, but a show like this still doesn’t get an automatic green light on a network. What needs to change about the TV industry?
Yes, we have seen so many new queer projects. The fact that Pose exists is just incredible. It exists on real-life TV, with so many trans and queer characters. I think that even a few years ago we wouldn’t have believed that was possible. That’s really incredible. I don’t think any queer show—right now, or at any time—is going to be an automatic green light. I think there’s this weird questioning of whether it will be watched, or if people will relate to it, or if they’ll buy the T-shirts. With Daisy Boy, one of the things that is most in our favor is that at the core of it, it’s a show about identity. It’s not necessarily a show about a gay kid. It’s not just a show about coming out. It’s more a show about coming into your own identity. That’s something everyone can relate to. 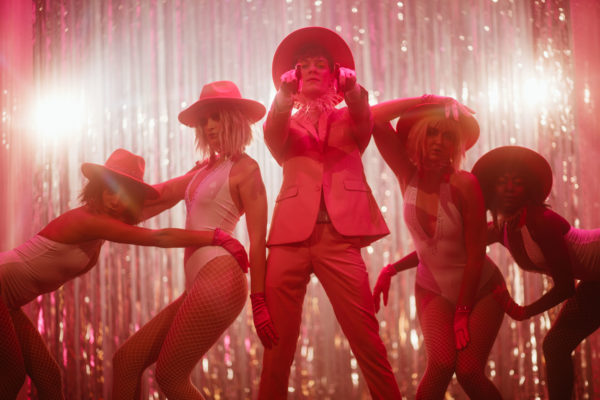 What are your influences for this project?
Wes Anderson is a huge influence to me. Everything he does is stunning. The show is going to look a lot like Napoleon Dynamite. I love things that are almost realistic, but they’re really stylized in a certain way. Even if it’s bland, it’s stylized bland. And heightened. I think that’s so gorgeous. Big Fish is a huge inspiration for it, and that dreamy fantasy stuff is gorgeous. As far as comedy, I was most recently watching PEN15. I had been working on writing this show for the last two years. This is the first thing I’ve ever written. I had to go through that process. It started out as me not knowing how to write out a scene. I sat down at Starbucks and tried to type out the conversation that I had with my parents when I came out, because I remember it so vividly. I’d been working on it for a long time, and then I saw PEN15 and I was just like, “Holy shit, we’re on the right track, this is what’s happening right now on TV, and this is the world that Daisy Boy exists in as well.”

Often, TV shows put gay characters on a pedestal. With PEN15, they can humiliate the characters with love. If I look back on my younger gay self, it’s not…
It’s not good.

When I see younger gays, I groan. You couldn’t pay me to go back. But you rarely get to show us making mistakes or being embarrassing, and I liked that about PEN15.
That’s exactly what we’re going for. Whenever I started, I wanted it to be funny. I wanted it to be a comedy and be light, but I wanted to have a very realistic aspect to it. Being a young queer person is not cute. It’s not always funny, it’s not always happy or exciting, and it’s not always sad. I really wanted to try to show the complexity of growing up as a queer person. Whenever I was watching PEN15, I was so excited by just how sad it would get sometimes. It’s funny, and then sometimes the reality of the situation sets in. I wanted to explore what it’s like being an awkward kid, making mistakes and saying stupid shit. There’s comedy in that, but you can show how dark it can be sometimes—how isolating and lonely it can be. You’re not really able to connect with anyone around you, and you’re going through the experience of coming to terms with yourself and your sexuality with no one to really talk to about it. In our case, he has a best friend who is a dog.

People assume that because I’m from Texas I experienced this extreme homophobia. That certainly exists, but it’s a bit of a clichéd misconception.
Sometimes I look back on it and go, “I’m from the South, I had such a terrible life growing up as a gay kid in the South.” But the more that I grow and the older I get, I don’t think that it was Houston that did that. I think that kids experience that everywhere, you know? I don’t want it to be this whole “Republicans are mean to gay people” thing. I want it to be broader than that. I want it to be more focused on how sometimes people are mean to people—you know? 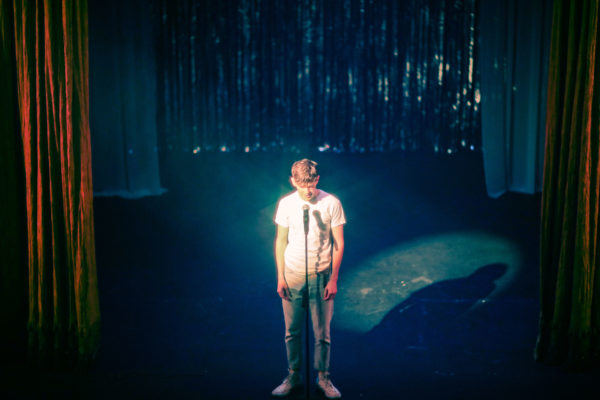 I think back and wonder if I was bullied—or was it that my straight girlfriends would make me a sidekick? Would I do that to them? It was more psychological, more about how my gayness played into relationship dynamics.
I wasn’t thrown into a dumpster, but I think going to school with the constant fear that someone is going to find out is kind of traumatizing. Having to live in that fear, just hoping no one finds out who you are, is kind of f–king horrible.

What’s it like going back into the closet for this character?
A lot easier now! [Laughs] After I started writing this, I learned that I’ve taken a lot more with me into adulthood than I originally thought. Some kids really are terribly treated growing up gay, wherever they are. When I was leaving high school, I think I was a little oblivious about what I was bringing with me into adulthood. I didn’t realize the effect of trying to hide who you are for so long, and trying to keep who you are a secret. I didn’t realize how much of that I would bring into my adulthood, and how much shame and insecurity would be wrapped up in growing up that way.

What has the response been from the Houston community?
To be honest, I have felt so supported by Houston, and it’s so crazy. I guess I look back and [realize that] I didn’t have a ton of friends in high school, so who knows who will reach out, or who will support the show. But I posted it on Facebook, and the outpouring of support from people from high school has been insanity. It’s been so crazy. They have stood up more for the show—it’s been so shocking and really beautiful to see how my community has stood up for this show, and really rallied behind me to make this show happen. It’s been really beautiful.

Knight’s Kickstarter for Daisy Boy ends Thursday, May 30. For more information on the show, or to donate go here.