Dayna Steele has been a pioneer in a lot of things. She’s been a rock-and-roll DJ, businesswoman, book author, nonprofit organizer, motivational speaker, and mother. Now, she wants to be a Democratic lawmaker from one of the reddest districts in Texas.

Steele is making history not only as the first woman to run for U.S. Congress in the 36th Congressional District of Texas, but also for having raised $500,000 so far—more than any previous Democratic candidate.

“And this is mostly small, individual donations,” Steele says. “We don’t take PAC or special-interest money.”

Steele’s campaign manager, Mitch Zaiman, one of 22 paid staffers, points to strong grassroots support. “And we plan to keep building on that,” he says.

Steele is running against first-term incumbent Republican Brian Babin, whose campaign did not respond to a request for an interview. In 2016, Republican Donald Trump captured more than 70 percent of the vote in District 36, which stretches from Seabrook to Jasper.

Babin has praised Trump and voted in line with the president’s position more than 95 percent of the time, according to FiveThirtyEight.com. Babin maintains the lowest possible score of zero on the Human Rights Campaign’s Congressional Scorecard, which measures support for LGBTQ rights.

During Babin’s failed congressional bid in 1998, his campaign manager, 21-year-old Jon-Marc McDonald, came out as gay and resigned. McDonald claimed Babin had made disparaging remarks about gay people, something the candidate denied.

Steele, who has a gay son, has been a longtime supporter of the LGBTQ community.

“I’m very proud of what my mom is doing,” says her son, Dack Justiz, joking that it’s probably the most important thing she’s ever done, except for raising him. “She is more than capable, and Texas 36 needs someone who will actually represent them, not just the richest people and corporate interests in Southeast Texas.”

Family support has been very important to Steele.

“We discussed this run as a family,” she says. “I would not have done it unless my husband and children were on board.” Steele, who starts her day at 5 a.m. by reading the news, says her husband and their younger son, Nick (who lives at home), cook dinner most nights after she’s spent the day on the campaign trail. She claims even the family’s dogs help out as the “kitchen cleanup crew.”

“Dayna has always had a passion and desire to help people, but her run for the U.S. Congress has intensified all of her considerable talent,” says her husband, Charles Justiz, a first-generation Cuban-American and retired NASA pilot. “There have been recent times when the concentration of her focus and fire have so reminded me of a nuclear furnace that I would have sworn I felt heat pulsing from her,” he adds.

Steele says there are no debates planned with Babin, and she hasn’t spoken to him. She spends her days traveling around the Southeast Texas district, holding meet-and-greets and knocking on doors. 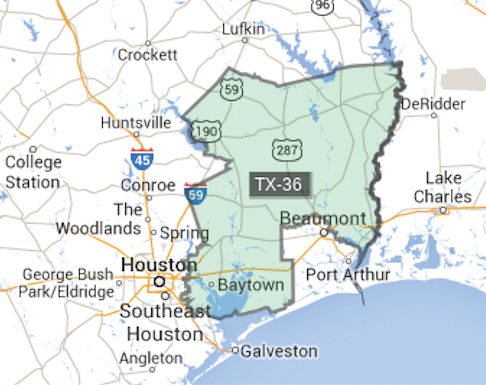 “I have met so many people in the district and heard so much about what they want in leadership,” she says. Steele, whose home in Seabrook took on 29 inches of water during Harvey, says she still sees people living in tents a year after the hurricane.

“I know this is a Republican district,” she says. “But we are getting more donations and more support. When I started this, I heard people say how brave I was, but that I couldn’t win. We are just now starting to get some national attention.”

Steele received a note of support from actor Alec Baldwin, and stars including David Crosby and Melissa Etheridge have hosted benefits for her campaign. She’s hoping that having Democratic Senate candidate Beto O’Rourke at the top of the ticket will have a down-ballot effect.

“Right now, it’s a ground war, and we are focusing on opening more district offices and recruiting more volunteers,” Steele says. “Eventually, we will do TV commercials.” Babin has already started airing commercials on Houston stations.

Long before she announced her run for Congress, Steele was a queen of social media, and that has been an important tool in her campaign chest. Although she still has ardent followers called “Steele Workers” from her radio DJ days, she has gained many more. But not all of them are supportive. If you follow her on Facebook, you’ll notice a lot of rabid Republicans posting some pretty mean things. And she fearlessly, but politely, engages them.

“If you give people an answer, they will come around,” she says. “Being on the radio was a good training ground. People always say nasty things, and I just don’t take the bait. I’m doing this because I want to represent all of the people. I want to hear everyone’s concerns. Yes, I even care about the trolls.”