Candyass is conquering the country, one state at a time. He began his adventure on the West Coast in January 2017, debuting Cary Leibowitz: The Museum Show in San Francisco at the Contemporary Jewish Museum. In February 2018, he barnstormed to the East Coast, setting up that comprehensive career survey and solo museum exhibition in Philadelphia at the Institute of Contemporary Art at the University of Pennsylvania. In March 2018, he unveiled his latest provocation, “I need to grow up and be taken seriously said the clown at the urinal,” in lower Manhattan at Invisible Exports.

In May, he launched his Lone Star offensive by bringing The Museum Show to the Contemporary Arts Museum, Houston (CAMH), where it is on view through August 26.

“I consider Cary Leibowitz to be one of the most influential conceptualists on the planet,” says CAMH director Bill Arning, who has closely followed the artist’s work for three decades. “Every time he shows his work, young artists are filled with the possibilities of new ways of making works.”

“Candyass is an urban legend in the art world,” says Anastasia James, the curator of The Museum Show. “Everyone in New York knows who Candyass and Cary Leibowitz is.” 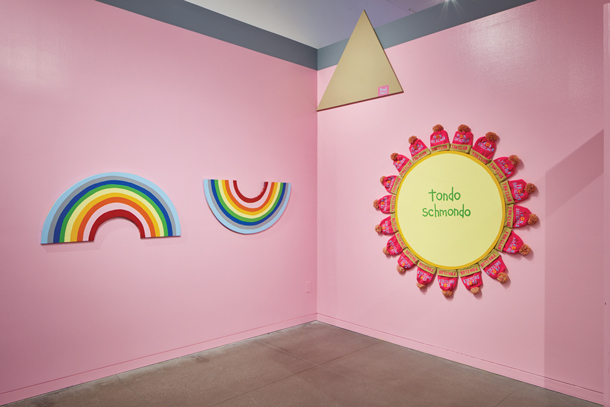 With Candy Land colors, wry camp humor, and a healthy dose of kitsch, the New York-based artist has explored his gay and Jewish identities in a series of text-based works for the last three decades. While his work seduces the viewer with its pop-art insouciance, it also plumbs the depths of darker emotions: the pain of growing up as a gay kid, bullied by others and targeted for being Jewish.

“Mr. Leibowitz plays sleight of hand with art, history, and identity, suggesting that you use whatever materials are at hand, from self-deprecation to cheap ceramics. He describes himself as a ‘loser’—and yet he’s a gallery-represented artist with a second career in managing art auction houses. In this context, marginality and power are complicated. In true borscht-belt fashion, Mr. Leibowitz wickedly turns the tables, advising that when current politics and the odds are stacked against you, you should make fun of the whole thing.” 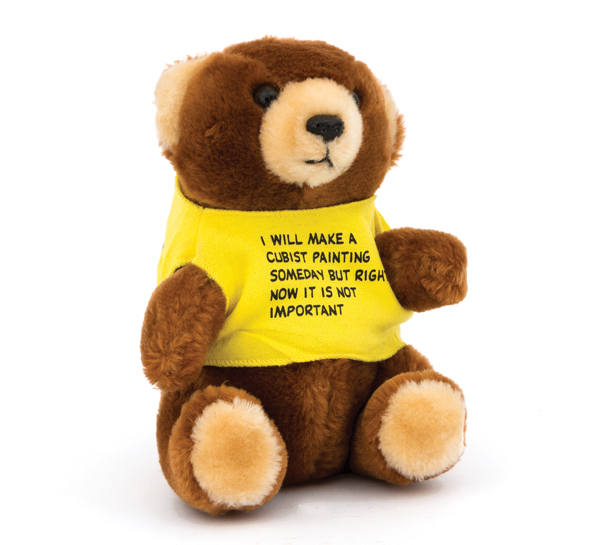 Leibowitz was born in New York City in 1963, and became fascinated by architecture at an early age. At 12, he wrote to stars he idolized, requesting headshots. He was blessed when Liberace, Angela Lansbury, and Judy Garland responded to his entreaties with autographed photos, which he treated like religious icons. (Forty years later, these same treasured photos made it into his retrospective at the CAMH.)

“There’s always been a self-consciousness about being a Jewish kid growing up in the Connecticut suburbs,” he remembers of his childhood.

One of his works on view at CAMH bluntly evokes the pain of that era:

“The miserableness of being 13 didn’t get purged until I was 40,” he recalled of that time.

In the early 1980s, he enrolled at the Pratt Institute in New York to study architecture, before changing focus and transferring to the Fashion Institute of Technology. Ultimately, he fled the big city for the University of Kansas at Lawrence, completing a bachelor’s degree in fine arts in 1987. “I had been a New Yorker all my life, and wanted to go someplace I hadn’t been before,” he told Artnet. “The Midwest seemed exotic.”

After college, he moved to Boston and secured a gig at a picture-framing shop. In the early 1990s, his star began to rise in the art world as he landed solo exhibitions in New York, Paris, and Germany. In 1992, he was even invited to decorate the windows at Barney’s on 17th Street in New York City.

“Generationally, when he came to the fore, it was a moment when identity politics were a new thing,” Arning recalls. “His incredible humor, with the creation of Candyass, is one of the most fecund aspects of the work of the last few decades.”

“The gay community at the time was upset with me for having this very narcissistic, depressive forum,” Leibowitz recalls. “There was much more of a focus on Gran Fury, [the AIDS activist artist collective that was a part of] ACT UP. I don’t think that I was part of the group. I’ve always been afraid of being part of a group.” 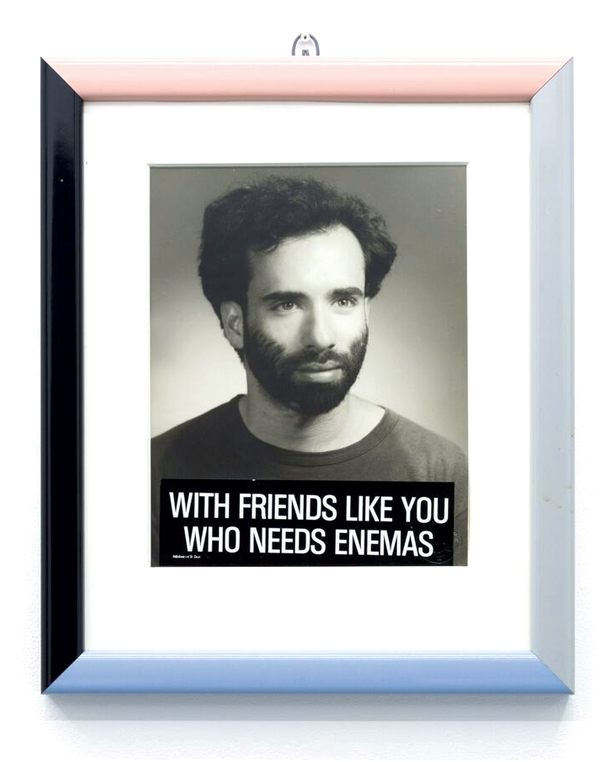 Along the way, he won fans in high places, including the actress Fran Drescher, who is featured in a lively interview with Leibowitz in the catalogue accompanying the CAMH exhibition.

“I do think some of my art embodies a certain kind of gay sensibility, even if it is the sensibility of an eight-year-old and hard to define,” he told Art in America in 1994. “Maybe it’s camp.”

He also embraces kitsch. In fact, it led to the creation of his Portrait of an 18th Century Lesbian Couple series.

“I always shop in dollar stores and flea markets,” he observed of the genesis of a series of ceramic figures that he came upon during a shopping spree.

“I suddenly realized that the figures were made by one person. They looked like same-sex couples rather than man and woman. I started writing on them as a series of 18th-century multiples.” He has produced other multiples: buttons, mugs, pennants, and even pink-and-blue Candyass-branded “sissy footballs,” available for purchase in the CAMH gift shop.

“I use color out of the [paint] can,” he observes. “I try not to mix it. I buy four or five colors a year. I don’t use too many dramatic colors at the same time. I don’t want to be suckered in. I will use red, but sometimes I feel that it’s a very seductive color.”

Two years ago, he married Simon Lince, his partner for eighteen years. In his day job, Leibowitz serves as worldwide co-head of editions at the British auction house Phillips, where he prices art for auction. “Because I have this respectable, well-paid career, I don’t need my art-making to support me,” he told Artnet.com in April. “It gives me the freedom to keep making art the way that I want to make it.”