Dario Mariani will do something extraordinary at the end of July. Mariani, a gay Houstonian from Venezuela, will run the equivalent of six marathons—or 155 miles—in seven days. And he will do so in temperatures ranging from 60 to 95 degrees, and at elevations of 3,000 to 6,000 feet, across the Gobi Desert in Mongolia.

Mariani says he has effectively been training for years to compete in this “self-sustained foot race” known as the Gobi March.

“I will carry my own gear, food, and water with me through the entire race,” Mariani says. “There are seven stages and approximately a marathon a day, except the last day where we’re doing a 10K. We camp at night until we cross the finish line. The only thing provided is water, campsites, and medical services.”

Mariani’s matter-of-fact tone might lead one to believe that the Gobi March, known as an ultra marathon, is an everyday occurrence. But even for an Ironman finisher like Mariani, this event is in a league of its own.

In fact, only 235 people from across the globe—from Afghanistan to Taiwan—will participate. Of those, only 21 come from the United States. Mariani will be the only Houstonian (and the only Venezuelan) in the race.

From Caracas to Lubbock

If you encountered the 30-year-old Mariani on the street, you might guess that he is an endurance athlete based on his lean physique, casual shoulder-length hair (usually twisted into a man-bun), and his penchant for wearing athletic gear. What the typical observer might not guess is that Mariani also holds a bachelor’s degree in petroleum engineering from Texas Tech University, which he earned in 2012. The journey that brought him to Texas (and now Mongolia) started in his homecountry of Venezuela.

“I chose to go to Texas Tech for a few reasons,” Mariani says. “I was accepted on a scholarship program where I was assigned an industry mentor. My mentor was a former petroleum engineer with Texaco. It was a great opportunity. Also, things with the Venezuelan government were growing increasingly tense and unstable.”

Beginning in 1999, Venezuelans have suffered under an authoritarian government led by former president Hugo Chávez, who died in 2013. Chávez was succeeded by the current president, Nicolás Maduro, who has governed in a similar manner.

It was during the Chávez presidency that Mariani grew up in the town of Puerto La Cruz. He graduated high school in 2005 before moving to Caracas, where he studied chemical engineering at the Universidad Simón Bolívar. His mother also studied chemical engineering, and his father is a pediatrician. Mariani was heavily involved in student government at the university, and it was there that he noticed things changing for the worse with Venezuelan politics.

“2007 was when many freedom-of-speech violations started happening,” he says. “Chávez shut down radio and television channels that criticized the government. Then he started to mess with the universities because students were supporting a more liberal agenda. When that happened, he tried to pass laws threatening the autonomy of the universities. Students took to the streets more and more. It became dangerous. Even peaceful protests would become violent, and cops would dissipate crowds using rubber bullets, expired tear gas, or even worse. There was a lot of anger and a lot of strife.”

On one occasion, Mariani was hit in the ankle with a rubber bullet. He was unable to walk without crutches for two weeks. It was around this time that he started applying for scholarships abroad at the urging of his parents and an American friend whose family was working in Venezuela. He was notified in June 2008 that Texas Tech wanted him to start in the fall. With his student visa in hand, Mariani left Caracas for Lubbock.

Mariani’s first meaningful connections in Texas included Houstonians Katherine Alvarado Schultz and Mark Cross. He met Cross through a mutual friend during a road trip to Houston, and Schultz soon thereafter. Mariani credits both friends with sparking his interest in running.

“I immediately loved Dario and decided to adopt him,” Schultz says. “Since then, he has become part of the family.”

After Mariani graduated from Texas Tech, he and Cross became roommates. “Mark would get up early in the morning religiously and go running,” Mariani says. “I could hear him. I didn’t understand how he did that. I was always a swimmer growing up, and had never really tried running. I had gained a lot of weight in college. I stopped swimming, but I didn’t stop eating like a swimmer, so I was looking for something to help me get back into shape.”

“When Dario first moved to Houston, he couldn’t run a mile,” Cross recalls. “He was an excellent swimmer. I knew he swam the Orinoco River in Venezuela, but he had never given running a chance. The first time he went running at Memorial Park, he walked the majority of the loop.”

Schultz also remembers that first run. “He showed up in Vans because he didn’t own actual running shoes,” she says. “He made it about a quarter of a mile, but I think he was hooked because less than a year later he was doing a triathlon. So, needless to say, he’s come an incredibly long way.” 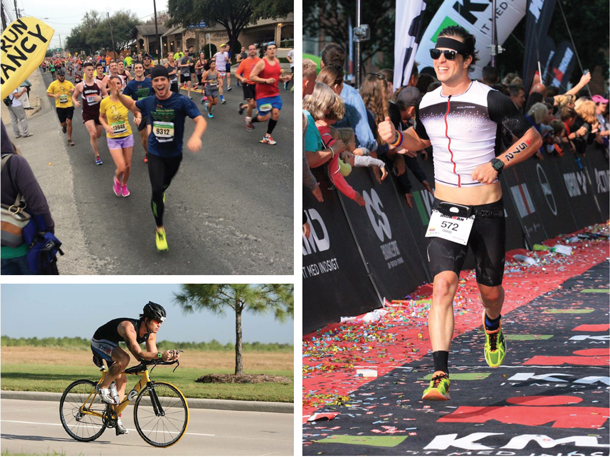 By 2013, Mariani was regularly completing sprint triathlons and looking at longer races. However, one thing still lingered in the background: he had not come out to his parents who remained in Venezuela. When they happened to be visiting during one of his races, he looked forward to having them in Houston to cheer him on.

“I introduced them to my boyfriend at the time as ‘my friend,’” he says. “I am not sure if they picked up on it, but they didn’t show up to see me race. I was really disappointed.”

In 2015, Mariani visited his family during a trip to Ecuador. He was dating someone new, and he finally revealed he was gay to his parents and brothers. His siblings showed him love and support right away. His parents’ reaction was not as ideal. Mariani leaned emotionally on his friends and brothers during that difficult time. He also looked to racing as a distraction.

In 2016, Mariani finished his first full Ironman competition in Copenhagen, Denmark. The race included a 2.4-mile swim, a 112-mile bike ride, and a 22.6-mile run. His close friends were there, cheering him across the finish line. 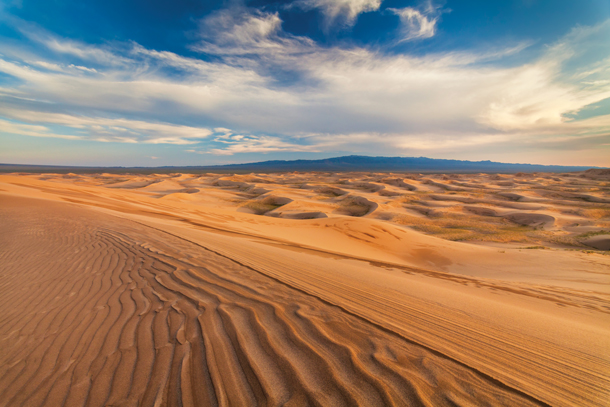 Training for an Ironman, a race completed in one day, can be a full-time job. Training for the Gobi March—approximately six marathons in seven days across the desert with a 20-pound backpack—requires even more commitment. Training increases gradually in intensity as the race draws closer. It requires a seven-day-a-week commitment at its height. Mariani alternates between long runs, weight training, and a lot of yoga. He is able to accomplish this through the help of his race sponsor, DEFINE—a gay owned, multi-disciplinary fitness studio that started in Houston.

“Athletes are busy people, with incredibly disciplined schedules,” says Henry Richardson, a friend of Mariani’s who is the founder and CEO of DEFINE. “The range of services that we offer would [normally] require going to multiple providers. Being able to complete all of your cross training under one roof saves time and money—something the competitive athlete can’t afford to waste.”

The two friends met when Mariani first moved to Houston. Richardson is a former collegiate diver who has expanded DEFINE to 20 locations across the country, and will soon become international.

“Dario is a phenomenal human being, and as a [gay man and former] athlete myself, I understand some of the stereotypes that can be put on us,” Richardson says. “I think this race is a beautiful metaphor for life and overcoming the challenges that we experience beyond just the physical. At DEFINE, we strive to continually be and become our absolute best for our team, our clients, and our community.”

Although there is much to be gained physically and spiritually for Mariani as he embarks on the race, there is also something else motivating his run. He is raising money to help the Charles Darwin Foundation’s work on the Galapagos Islands. In fact, it was Mariani’s support for the foundation’s work that inspired him to begin this journey. Friends of Mariani know him to be an avid fan of Shark Week on the Discovery Channel.

“Shark species are becoming increasingly endangered due to their fins being considered a delicacy in some cultures, and because they are misunderstood by others,” Mariani says. “The funds raised will go toward the foundation’s shark research and protection program in the Galapagos. When you’re doing something like this, you can’t just do a marathon. I wanted to do something with a bigger impact.”

You can follow Mariani’s journey on Instagram @mayhem_mariani. To donate, visit donate.icfdn.org/npo/dario-supporting-cdf-shark-research-and-protection. For more about DEFINE, visit DEFINEbody.com.