Concierge Travel was founded in 1997 by Kim Gustavsson and his partner, Charles Caliva, as a boutique, gay-owned travel agency and tour operator. In 2009, the agency began offering its own small-ship cruise charters, and today it bills itself as the largest RSVP-vacation agency in the world.

But it isn’t just the gay cruises to exotic locales that the LGBTQ community loves; it’s also all the good that Concierge Travel does by donating to equality-related causes. 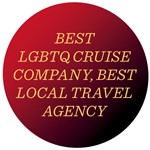 “We both have other careers,” says Gustavsson, who works as a leadership consultant. “So neither of us has drawn a salary from the travel agency for 10 years. We donate it all to charity. We give something to pretty much anyone who comes to our door, but our main focus right now is the Montrose Center. We donated $30,000 for the No Place Like Home gala that raised $325,000 for the planned LGBT-friendly seniors housing project. It’s not just about writing a check. It’s about the leverage a nonprofit can do with that donation.”

In the past, Concierge Travel has donated to the Houston Pride Band, the Human Rights Campaign, and Legacy Community Health. The agency has also contributed to national and international LGBTQ organizations, but Gustavsson says that in light of the Trump administration’s negative actions against the LGBTQ community, they have decided to focus on local efforts. They plan to make sponsoring the Montrose Center’s No Place Like Home event an annual effort.

Gustavsson is busy working on a Puerto Vallarta trip that the agency has set for February. “It’s going to be a relaxing and fun-filled week at a private villa,” he says. “It’s on a private beach, and the accommodations are beautiful—the Villa Verano and Puerto Vallarta Beach Club—and we’ll have private chefs and bartenders on site.” Tours for the rest of this year are sold out, but you can book the Puerto Vallarta week and other 2018 trips at conciergetravel.cc. “And we are really excited about some of the tours we’re planning now for 2019.”

As you would expect, the couple travels extensively, with Puerto Vallarta being a favorite spot. Gustavsson has been to 86 countries and has studied seven languages. One of his favorite destinations is Amsterdam, but he says you can’t beat Peru for the food.

Unfortunately, it hasn’t been all galas and gay cruises this year.

“We lost about 95 percent of everything—our house, our office—during Harvey,” Gustavsson says. “It just wiped us out. Luckily, we have a great staff, and within seven days, we were back up and running out of our manager’s house. As for our home in Bellaire, we had two-and-a-half feet of water inside. We’re just going to tear it down and rebuild. I had been wanting a redo anyway.” —Marene Gustin