Eighteen years ago, chef Lena Pyles and her former partner Victoria Newsome came to Galveston for a three-month stay to unwind and soak up the laid-back Island atmosphere. Today, while they are no longer a couple, the pair co-parents their teenage daughter Presley and runs EATcetera, an eclectic lunch-and-brunch spot specializing in fresh, seasonal ingredients and vegan, vegetarian, and gluten-free meals.

“We have always had vegan, vegetarian, and gluten-free options, but the volume of customers with these preferences discovering us for lunch and all-day brunch is increasing,” Pyles notes. “We have a growing number of customers who have food sensitivities or allergies. Our staff serves specialized-diet customers at probably 50 percent of our tables, and many customers are pleased that each diner can enjoy a meal they prefer—whether they are meat-eaters, plant-based, or have a sensitivity. All our desserts are vegan and gluten-free, with dessert sales doubling in the past year.”

Newsome, who comes from a long line of bakers, has been a vegetarian since 1984. Health issues made her experiment with allergen-free recipes. “I understand how important it is for EATcetera’s clients to enjoy tasty cuisine that is also safe to eat,” she says. “Particularly desserts, because everyone deserves to have a birthday cake.”

Pyles began cooking at 16, and after high school followed her big brother—Stephan Pyles, one of the founding fathers of Southwestern cuisine—to Dallas. She became an executive chef by age 25 and worked at restaurants in Dallas, Atlanta, Las Vegas, Austin, and Houston before settling in Galveston to run a private-chef business.

“I always liked EATcetera as a customer,” she says. “When the founding owner was thinking about retiring, she mentioned to some friends that she was looking for someone to take over. I heard about it, gave her a call, and within two weeks we had the completed paperwork signed. It never even made it to market.”

EATcetera reopened in 2018, and the following year they opened EATcetera at the Whistle Stop Café in the Galveston Railroad Museum.

“The Whistle Stop menu is a subset of the restaurant menu, including vegan options for sandwiches and burgers plus more traditional fair foods,” Pyles says. “Customers can eat at the café without purchasing museum admission, but they must remain in the café area.” 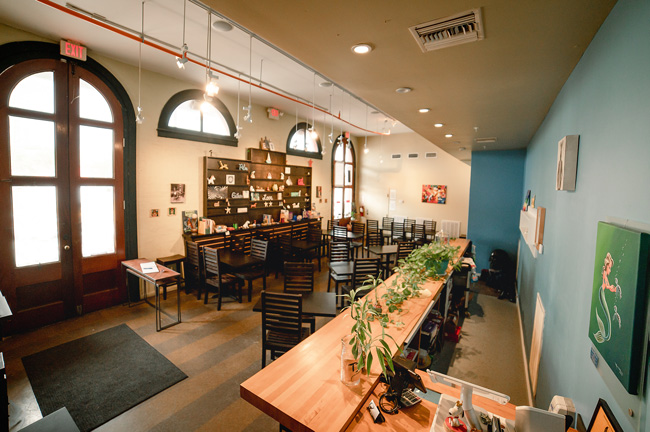 Besides offering great health food, Pyles also serves up community service for the Island’s youth. “One of the prouder moments for EATcetera is the Polar Express Recycling Program,” she says. “The first year we participated in Polar Express at the Galveston Railroad Museum, we saw over 5,000 cans and bottles going to landfills. The museum did not have the staff or budget to provide recycling, so with the permission of the Galveston Railroad Museum director, we started the Polar Express Recycling Program. EATcetera organizes the effort and provides supplies and identifying T-shirts to volunteers. The Ball High School Honor Society members volunteer to change the recycling liners nightly, and last year Republic Services provided the dumpster. Instead of 5,000 items going to landfill, EATcetera coordinated seven large dumpsters of bottles, cans, and cardboard that went to recycling.”

At both locations, you can also feast your eyes on some local artwork.

“EATcetera started the EATcetera Youth Arts Program in 2019,” Pyles notes. “This program provides free exhibit space to [local] youth during ArtWalk evenings, which occur on a semi-regular basis in Galveston. The artists’ works are available for sale, and they generally stay at the restaurant for a month after an exhibit. Many of the permanent pieces at the restaurant were provided by some of the young artists.

“While we were organizing exhibits for the Youth Arts Program, we found ourselves attracting the interest of youth groups that had a desire to have public exhibits that far exceeded our restaurant space. As we have [the café] at the Galveston Railroad Museum, we asked them if they would be willing to allow us to use their open-air patio space during ArtWalk evenings. They agreed, and this year we launched EATcetera Kids Zone at the Galveston Railroad Museum, where larger groups exhibit. This July 16, the Galveston and Harris County Boys & Girls Clubs will be exhibiting 50 to 75 works created by youth artists in the greater metro area. Unless otherwise noted on an individual piece, all of these pieces will be available for sale, with proceeds going to the individual artists.”

EATcetera’s strong community-service commitment to youth and education also led to theirparticipation in Eat Out for Education Day, as well as donating gift certificates to a variety of youth-related organizations.

Whether they’re carnivores, herbivores, or omnivores, everyone can find something delectable on the EATcetera menu—including some of Chef Pyle’s Asian fusion creations. “My favorite is the peanut ponzu soba noodles,” she says. And don’t forget to check out her chef’s specials and the soup of the week whenever you visit EATcetera.