Growing up Roman Catholic and being assigned female at birth, one won’t find many role models for becoming a clergyperson. The path towards a vocation in a pulpit can be, shall we say, not straight.

But that’s where the story of Mak Kneebone, pastor of Plymouth United Church in Spring, begins. Growing up in Michigan, first in Detroit and then in more rural areas, he knew he didn’t fit in, but didn’t have the language to explain it. In college, he used the label “lesbian” to describe himself for a while, and found a community, but he still felt out of step. There were few resources for dealing with what he was feeling. “Saying ‘I’m not actually a woman’ didn’t get met with great applause,” Kneebone admits.

Having a strong religious impulse and finding so little support for his queerness in the early 1980s, Kneebone switched religious traditions. “I went into the Pentecostal church, where I became ashamed of everything about myself and became an ‘ex-gay,’” he says. For ten years, he was involved in that tradition, teaching and leading small groups. It was not a sustainable situation. “I couldn’t manage it; I couldn’t pretend anymore,” he says. “I knew I needed to explore and discover how God actually made me.”

He came out again, and found himself shunned by the community he’d served all those years. He left with a new conviction. “I decided I knew two things. I knew I wasn’t heteronormative, and I knew that God loved me.” He just had to figure out how those things worked together.

Kneebone had a close friend in Chicago who he trusted, so he moved there to begin really addressing his gender identity. He found a therapist there who listened to him and agreed that he was not a woman and also that he had a calling to ministry. “That was really profoundly moving to me that somebody else could reflect back to me something that I knew about myself,” he says.

This is where he began his “intellectual and emotional transitioning.” He began thinking about how to move in the world as a man. He had reservations. “I began to look around me and see what it meant to be a man in terms of societal norms,” he recalls. “I didn’t like what I saw. The toxic masculinity was more off-putting than it ever had been before.”

One way Kneebone explored his new path was to start reading about the feminine divine, specifically noting the book When the Drummers Were Women by Layne Redmond. This, he notes ironically, helped him into his emerging masculine identity. “The more I read about the goddess and the more I fell in love with her, the more I realized I was a man,” he says with a smile.

He started his pastoral career in Indiana with an American Baptist congregation. But since he had attended a seminary affiliated with the United Church of Christ, Kneebone started looking for opportunities within that denomination. He saw an opening at Plymouth United Church in Spring, and he liked how they described themselves. He thought, “Well, that’s a great description of a church, but I don’t know if the church is really like that, especially in Texas. But I’m going to find out.” 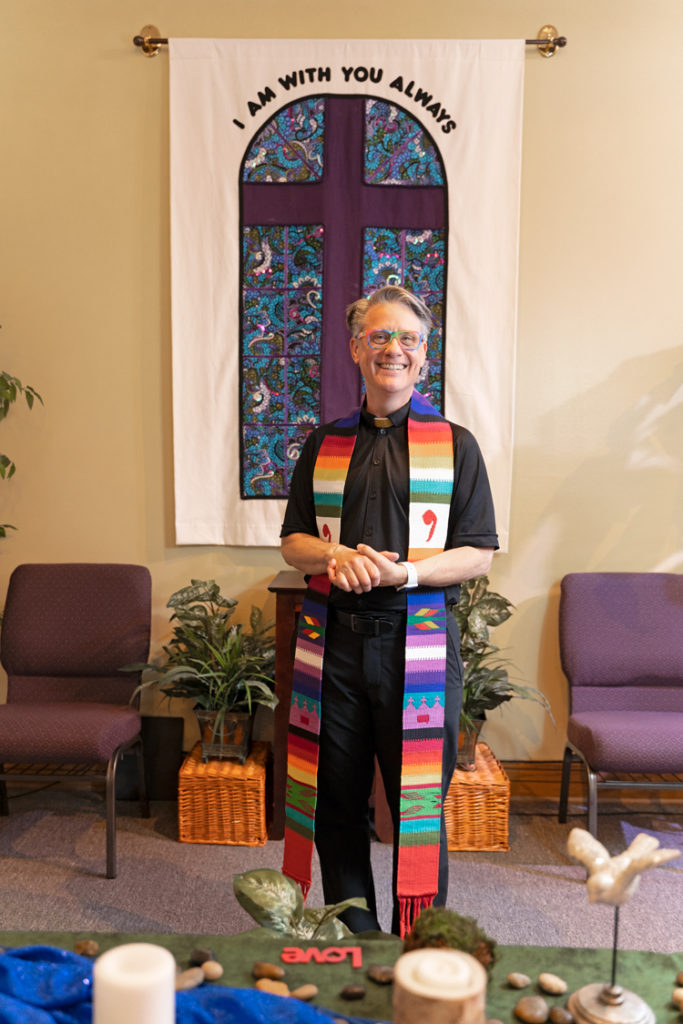 He put in his paperwork for their consideration, and they called him for an interview. “They ended up, every step of the way, being who they said they were,” he notes. Everyone agreed they belonged together as pastor and congregation.

It’s been over five years since Kneebone left the extreme cold of the Midwest for the extreme heat of southeast Texas, and his enthusiasm for serving this congregation is still evident. When he left Indiana, he had to temporarily stop his testosterone treatment and other plans for medical transition until he got established with new medical teams and insurance in Texas. When everything aligned for him to get top surgery, they were enthusiastically supportive, helping him with meals after surgery and being available to reach high shelves during his recovery.

For many queer Houstonians, venturing “outside the Loop” means entering unwelcoming communities, but Kneebone emphasizes that is not his experience in Spring. “We say who we are, and we are who we say,” he concludes. “That’s our goal. We’re not perfect, but it’s our goal to be open and affirming, to be inclusive of people with mental-health challenges and conditions, to be inclusive of people with disabilities. There are just so many variations in humans, and there’s no reason why we can’t all be together in one space and love each other.”