This June, I’m going to eat my feelings—but in a good way. Pride Month presents some unique (and most importantly, delicious) opportunities to show support for the LGBTQ community by partaking in the limited-edition treats offered at several local eateries.

Belly up to the bar for a good cause this month at Axelrad, which will be pouring patrons a Frozen Coconut Limeade with 20 percent of sales going to the Montrose Center. The frosty beverage is made with coconut rum, fresh lime juice, and cream of coconut. Two sizes are available: 9 ounces for $7.50 and 16 ounces for $12.50. 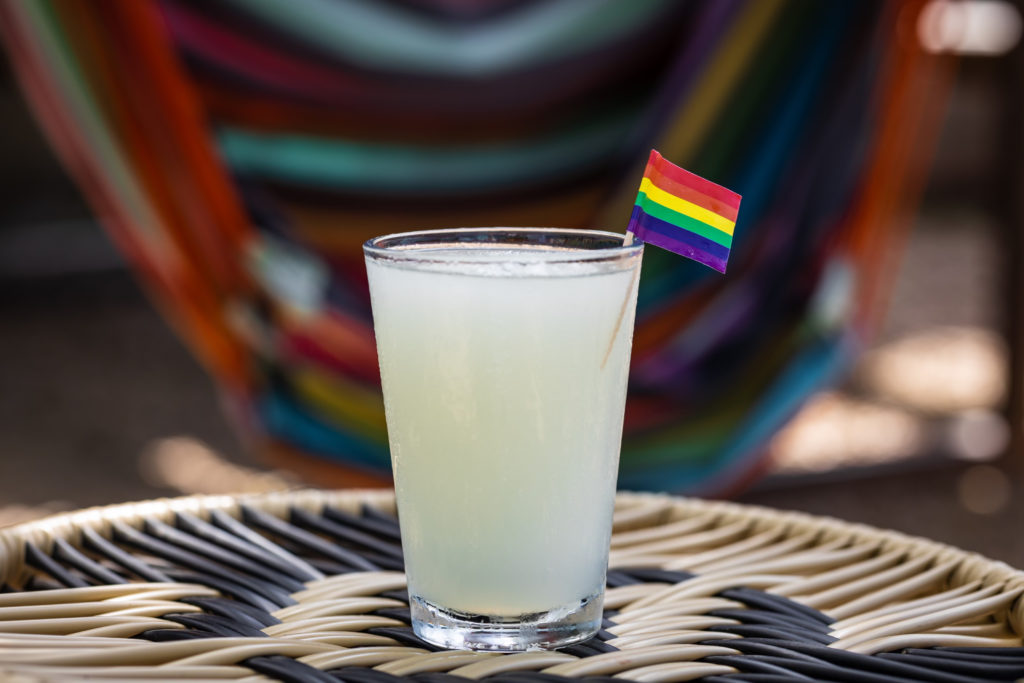 Wrap your taste buds in a warm, starchy embrace with one of Hugs and Donuts’ special Pride Donuts. For around $2.50 each, you get a fresh donut glazed in pearl-white frosting and adorned with playful rainbow streaks. Pick up a flirty dozen for your co-workers, but since these donuts are best enjoyed fresh from the fryer, be sure to “test” one or two before returning to the office. 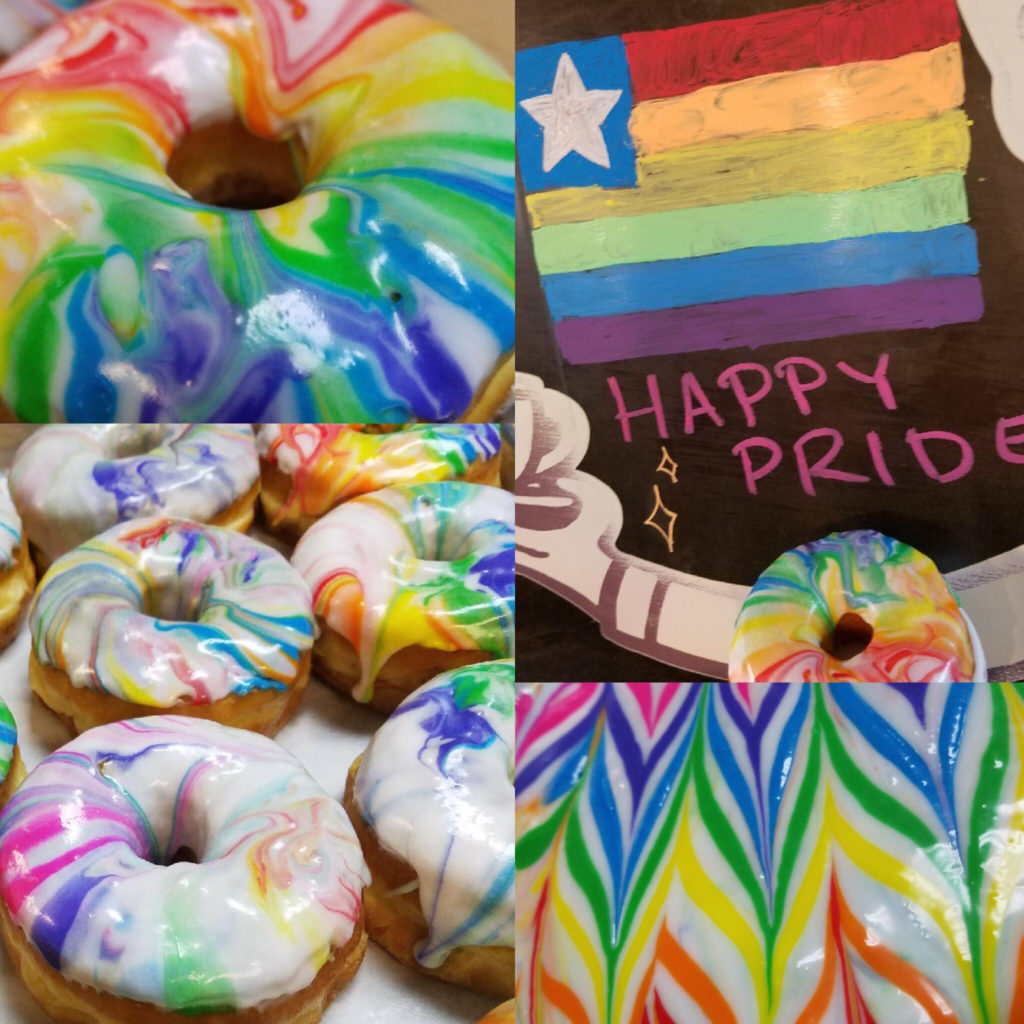 Get in the Pride spirit with some spirits from the Houston Cider Company, which recently debuted its Prider Cider. This piquant floral raspberry and lemon brew is the perfect addition to your gay-as-a-picnic basket. Six-packs can be purchased online for $12. 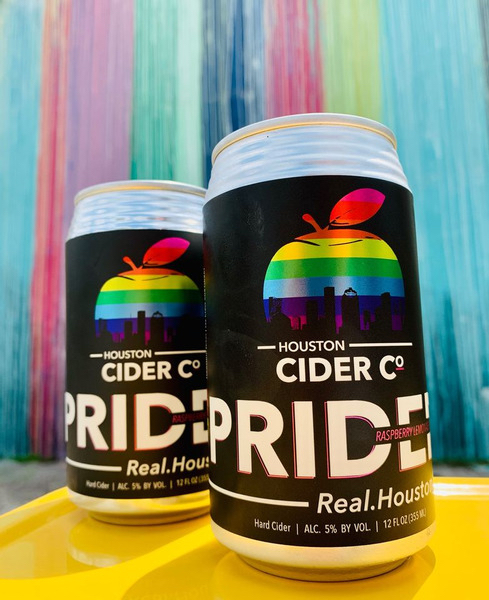 And speaking of picnics, local gourmet purveyor DR Delicacy has curated a Pride Picnic Basket bursting with everything you could desire for a sophisticated al fresco repast—Iberico chorizo, salami, octopus in olive oil, truffle potato chips, and more. The baller basket will be available until June 29 for $74.80, with 10 percent of sales going to the AIDS Foundation Houston.

The beloved engineers-turned-dumpling-masters Mike and Chih are offering tasty boxes of a dozen Rainbow-Colored Pride Dumplings for $25. They’re also hosting a series of classes where participants can make their own rainbow-colored dumplings. The Dudez are donating a portion of class proceeds to Hatch, which supports Houston’s LGBTQ teens. 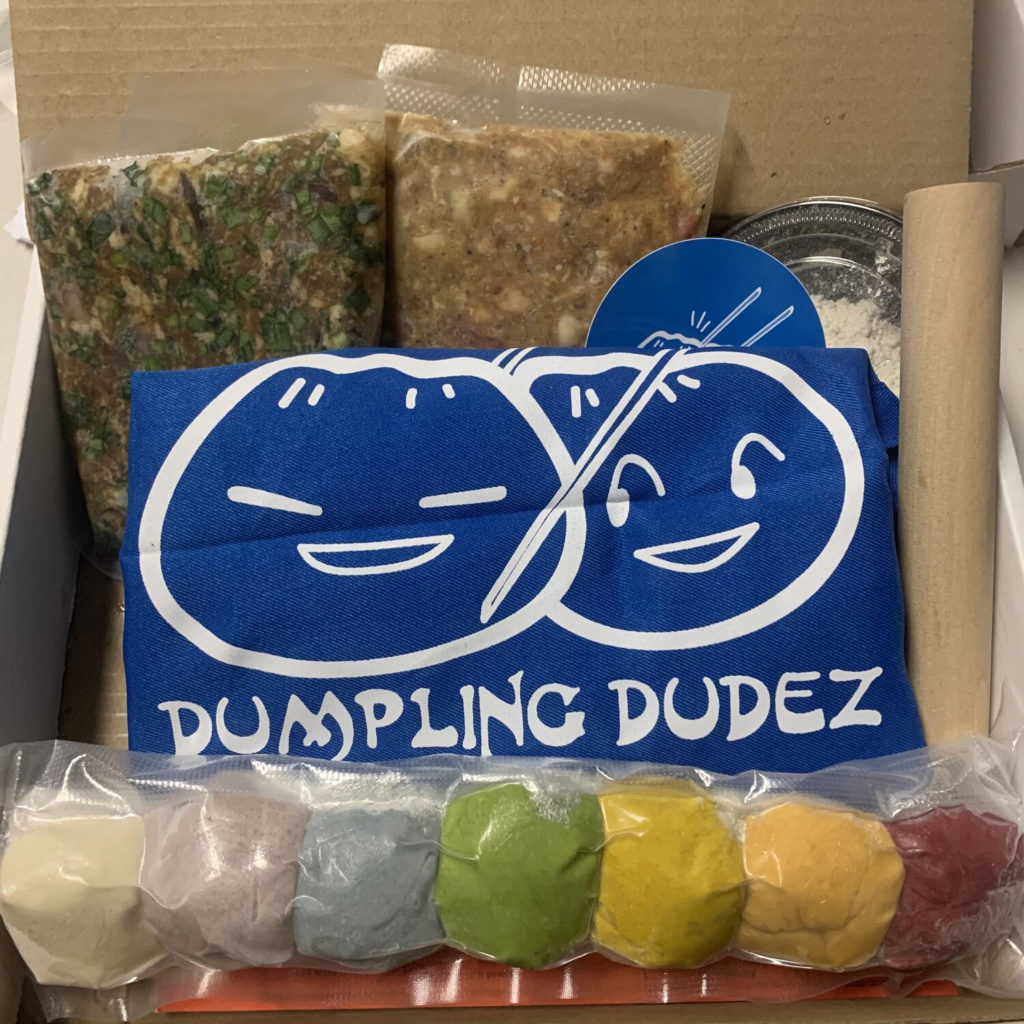 This West Houston eatery is offering an a-maize-ing adult beverage and entrée for Pride Month, with a portion of the proceeds going to the AIDS Foundation’s Help House. Whet your whistle with a Taste the Rainbow Cocktail ($16) before diving in to executive chef Fabian Saldana’s sumptuous plate of red snapper with purple shrimp broth, and garnished with rainbow pico de gallo ($30).

Dessert Gallery is improving on the usual rainbow-colored layer cake in the best way possible. Owner and baker extraordinaire Sara Brook has constructed a gorgeous dessert comprising alternating layers of French vanilla and confetti cake welded together with whimsical layers of rainbow buttercream. This Slice of Pride Cake is, as the name suggests, only available by the slice ($9.95) during the month of June. Sharing is encouraged, but by no means mandatory.

This cosmopolitan urban bistro is offering diners assorted specials as part of their June 24–26 Pride Brunch menu, served from 10 a.m. to2:30 p.m. Those recovering from the Pride festival and parade the night before could start with the $15 Loud & Proud Cocktail (vodka, coconut rum, lychee liqueur, prosecco, hibiscus syrup, lemon juice, strawberry) before gorging on the $17 Fruity Pebbles French Toast—egg-soaked slabs of golden Hawaiian bread crowned with Fruity Pebbles whipped cream and tropical fruit, then drizzled in raspberry syrup and dusted in powdered sugar. Those who like their French toast with a hint of savory should opt for the tropical fruit version ($15) made with ciabatta and vegan goat cheese, then piled high with strawberries, blueberries, kiwi, clementines, and mangoes.

During June, El Bollilo is throwing some shade on their Pan Dulce by decorating the signature fluffy sweet pastries (various sizes, $1 to $3) are decorated in Pride rainbow colors that are as pleasing to the eye as they are to the palate.

To celebrate Pride Month, Kickin’ Kombucha presents a probiotic (and philanthropic!) triple-whammy that will benefit the Montrose Center.  Option 1: A six-bottle  Kickin’ Pride Pack ($25), featuring a full spectrum of kombucha flavors from red Everyday Hibiscus to yellow Passionate Pineapple and violet Butterfly Lavender. $5 of each Pride Pack sale is donated to the Center. Option 2: Blue Raspberry Lemonade, a refreshing combination of fresh-pressed lemon juice, raspberry puree, and blue spirulina ($4, with all proceeds donated to the Center. Option 3: The Cochinita Rainbow Bowl ($12), assembled by KK’s sister food vendor Cochinita & Co., is a gorgeous and fragrant collaboration of pulled pork, Mexican rice, beans, slaw, guacamole, and queso fresco. $5 of each sale will be donated to the Center.

This gay-owned and -operated cookie emporium is once again baking up some festive Pride Sugar Cookies ($2 to $3). The artfully frosted shortbread confections (smiley faces! hearts!) are ideal fare for intimate tea parties, as well as lovely take-home favors at larger Pride gatherings. Michael’s will be donating 10% of all proceeds from the cookie sales to the Montrose Center Hatch Youth Program. 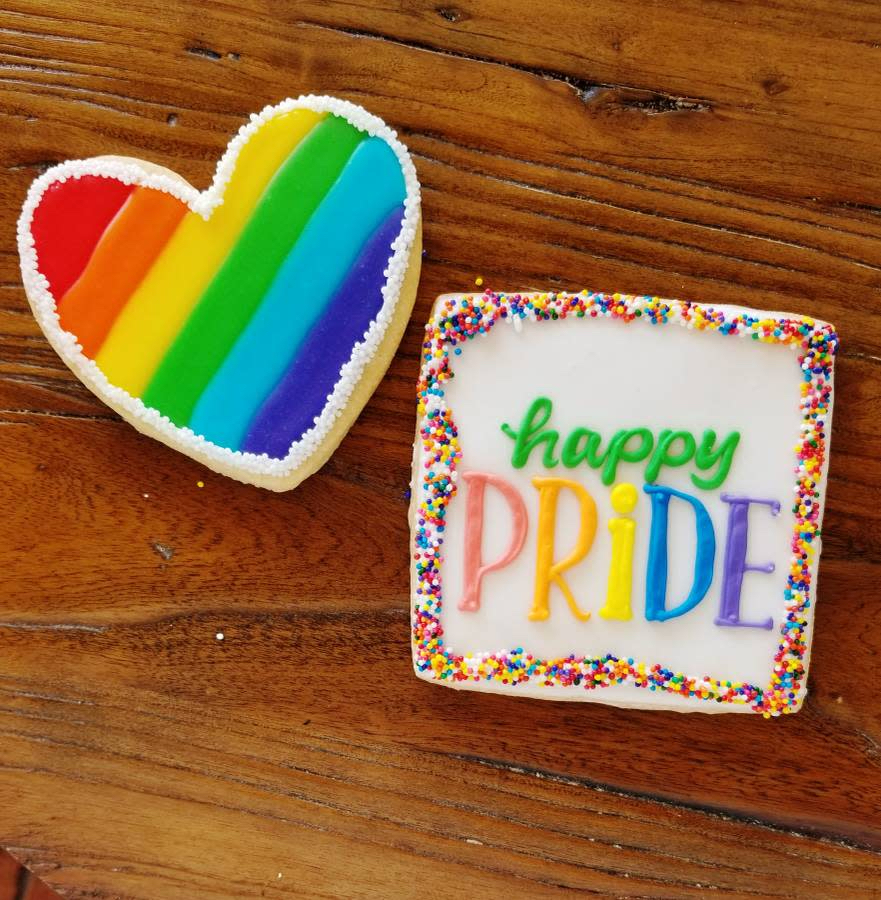 Pride is all about the purple rabbits at Eureka, which since 2018 has released a “Lavender Bunny” Pride Month brew made from lavender and butterfly pea flower. Part of the proceeds from the $16 six-packs will benefit the Montrose Center. 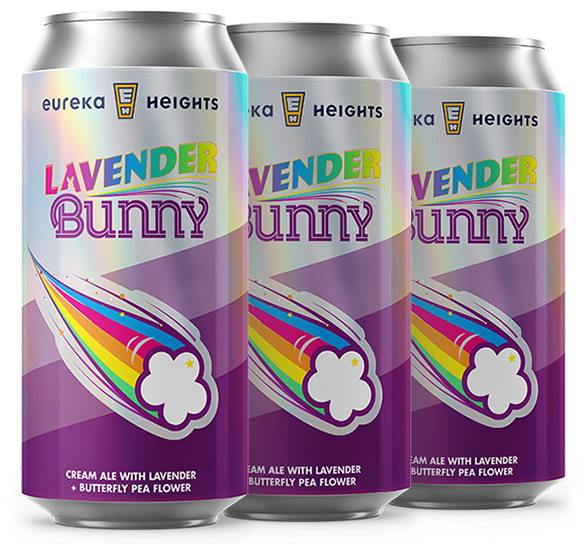 The monstrous portions of gourmet deli fare make it hard to clean your plate at Kenny & Ziggy’s but skip the second half of that pastrami sandwich to save room for some of the deli’s Rainbow Cake ($6 per slice; $50 for the whole 10-inch cake). Feeling Prideful but only a bit peckish? Go for one or two of K&Z’s New York-style Rainbow Cookies layered with marzipan, raspberries, and rich chocolate ganache ($18 per pound). Deli maven Ziggy Gruber is donating 10 percent of these dessert sales to Covenant House Texas, which addresses the many needs of local LGBTQ youth in crisis.

With its storied history as a safe space for Houston’s gay community, The Original Ninfa’s is a reliable go-to spot for Pride revelers. Get the party started by sipping slowly (you have been warned) on Ninfa’s Watermelon Mojito ($13), a potent rum-rich potable that pairs especially well with their seafood enchiladas. For each mojito sold, Ninfa’s is giving back $1 to the AIDS Foundation Houston. 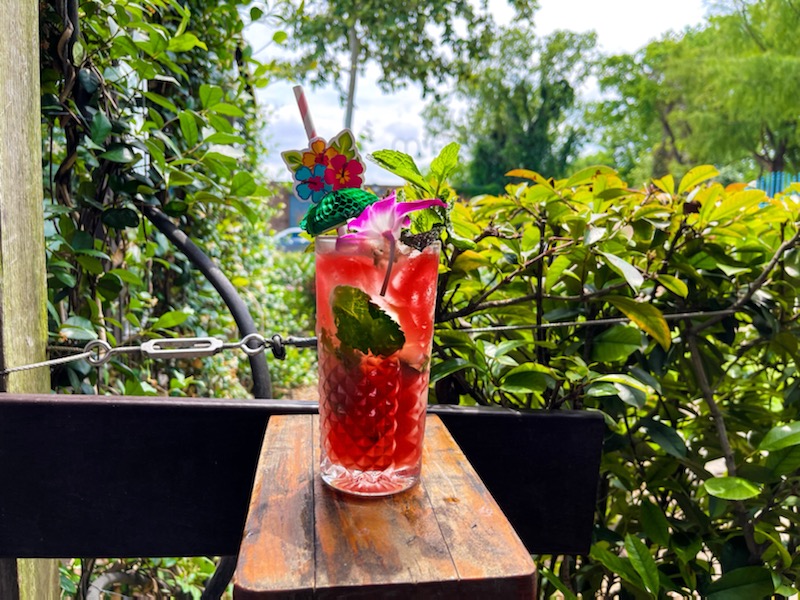 With its flagship location situated in the heart of Montrose, Common Bond is giving back to the supportive LGBTQ community that helped grow the restaurant group from its first location to what it is today. During Pride Month, Common Bond will donate a portion of proceeds from a limited-time Pride Velvet Cake to the Montrose Center to help aid in its mission of empowering LGBTQ individuals. The $7 etrement is a velvet cake with vibrantly colored layers and cream cheese icing. It is topped with whipped cream, white chocolate pearls and edible gold flecks. 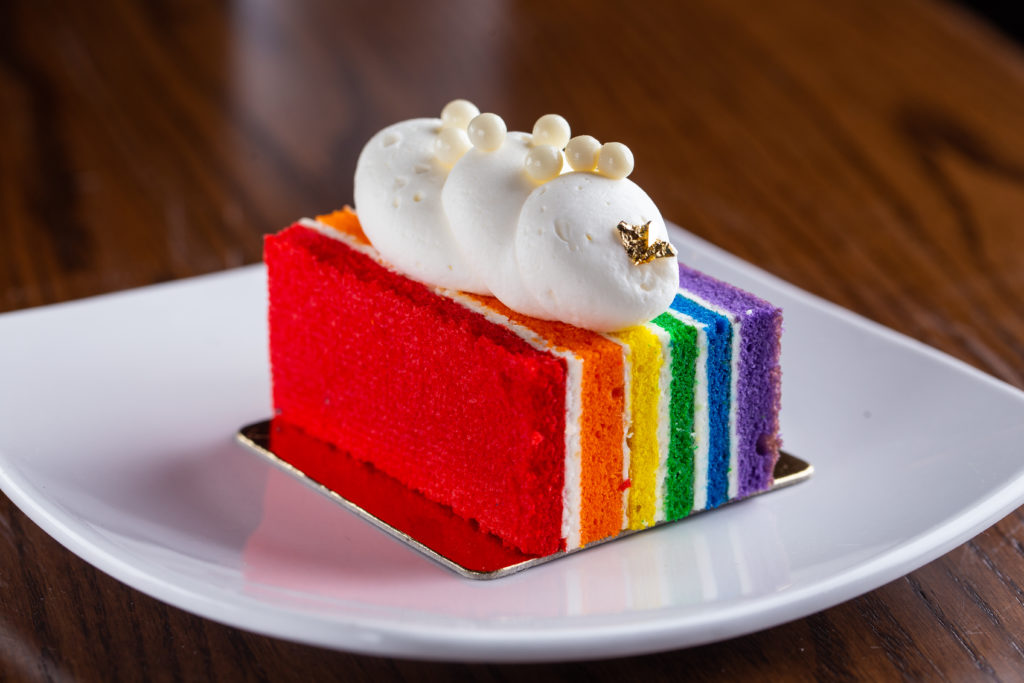